Fife’s Railway Harbour on the Tay

When the railway from Cupar and the south was opened in May 1848 by the Edinburgh & Northern Railway Company (ENRC) it terminated at Ferry-Port-on-Craig. Prior to this any cross river traveller had to transfer to the recently introduced steam driven ferry service, provided from 1845 by the ‘Mercury’, if they wished to continue their journey north of the river. In July 1848 the ENRC gave notice that goods and livestock could be conveyed across the river on their own steamer the ‘Express ‘ which could accommodate wheeled traffic. It served for 31 years and in turn was followed by the ‘Auld Reekie’. The period until the opening of  the Tay Rail Bridge in May 1878 coincided with a significant period of growth and industrial development within the town. The Parochial Directory of 1861 lists 27 addresses of Furnished Lodging-House Keepers to help cater for the through passenger traffic. The ferry service regained popularity in the period following the collapse of the first Tay Rail Bridge in 1879 and the opening of the replacement bridge at Wormit in June 1887, with up to 13 daily passenger crossings per day by 1881.  Despite legal challenges by the railway company to be released from their obligations, a passenger ferry service continued to be provided by the paddle steamers ‘Dolphin’, sometimes ‘Royal Norman’ and then by a small motor launch the ‘Abertay’, continuing until its demise at the beginning  of World War II. 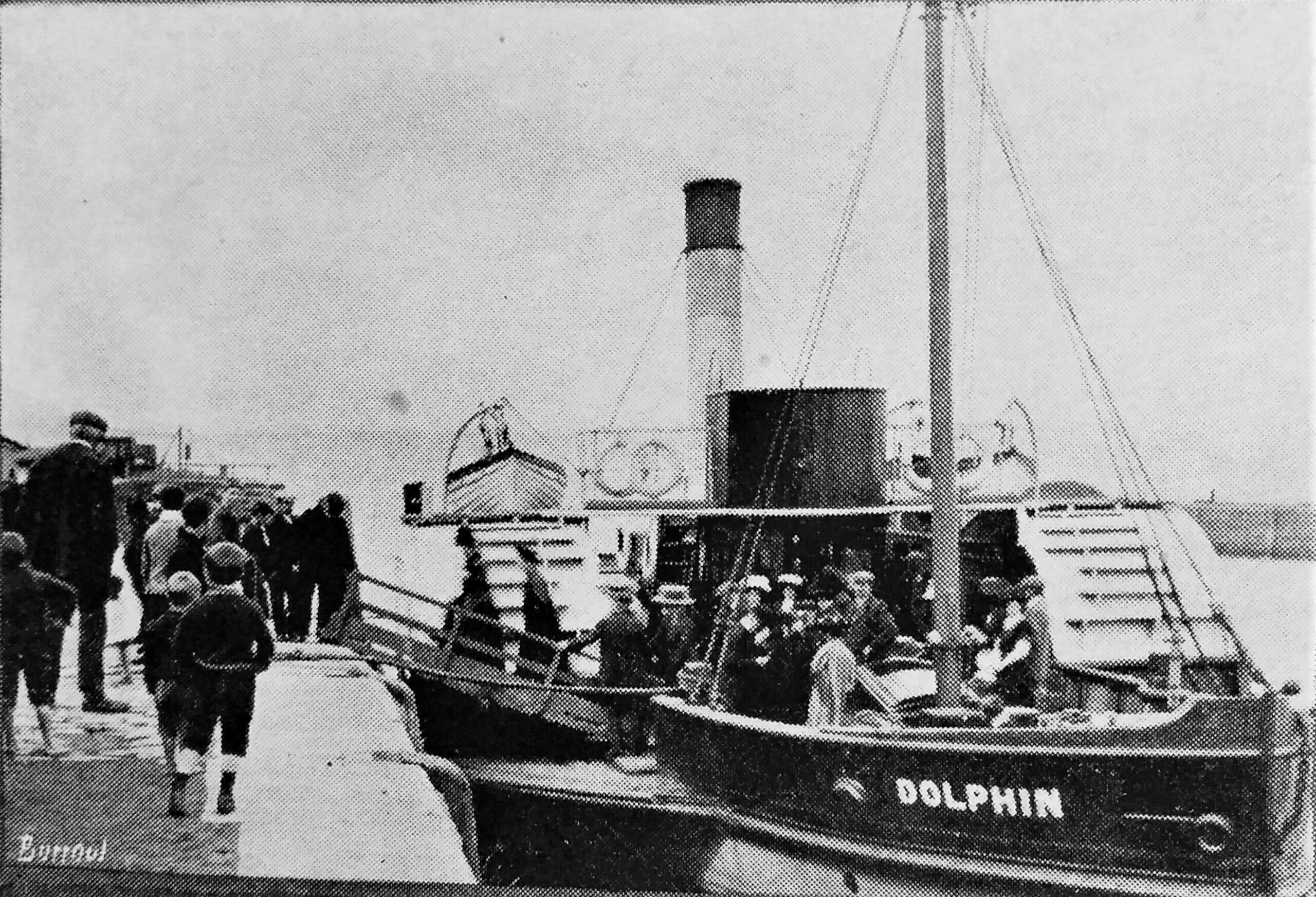 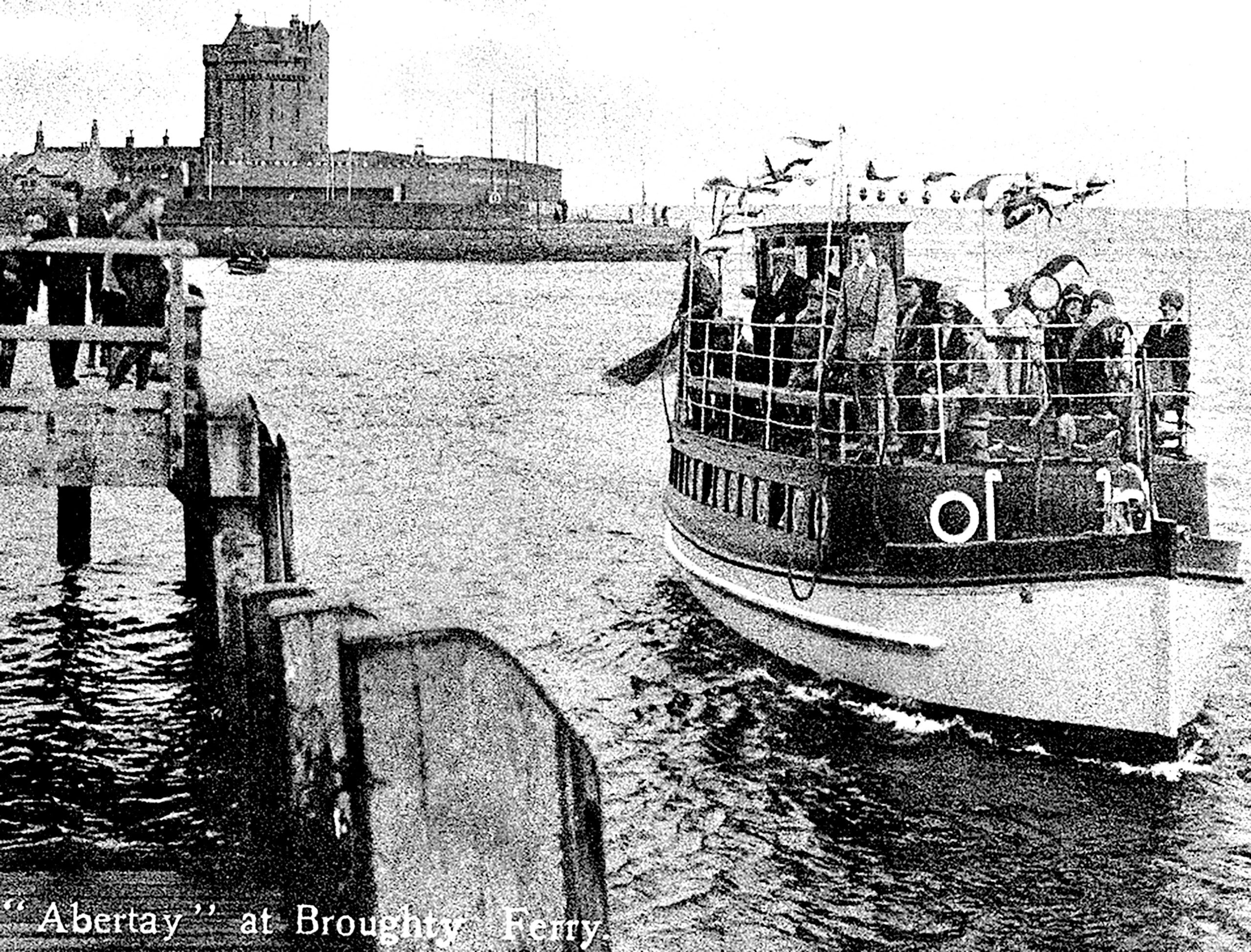 Similar floating railway apparatus for transporting the loaded wagons, operating at the Burntisland crossing on the Forth

The inefficiency of the transhipment routine for goods from the railway wagons, led to the design and introduction of The Floating Railway by the Company’s engineer Thomas Bouch, later Sir Thomas Bouch, designer of the ill-fated first Tay Rail Bridge. He developed his design from a system adopted previously at Bedlington Colliery and Blyth in Northumberland. Facilities for direct shipment of loaded wagons without breaking bulk had first opened on the Granton to Burntisland route on the River Forth crossing in 1849. It was followed by a similar service at Tayport in April 1851, once the harbour and special loading facilities had been completed. The specially designed vessel the ‘Robert Napier’ could carry up to 18 loaded wagons for up to seven round trips per day and was joined shortly afterwards by the ‘Carrier’ in 1858. This service was eventually superseded in 1880 following the opening of the first Tay Railway Bridge from Wormit to Dundee on the 31 May 1878, however the subsequent tragic collapse saw the ‘Robert Napier’ returned from the Forth and continue the wagon crossing service until the new bridge opened in 1887 (A. Nisbet 1999) 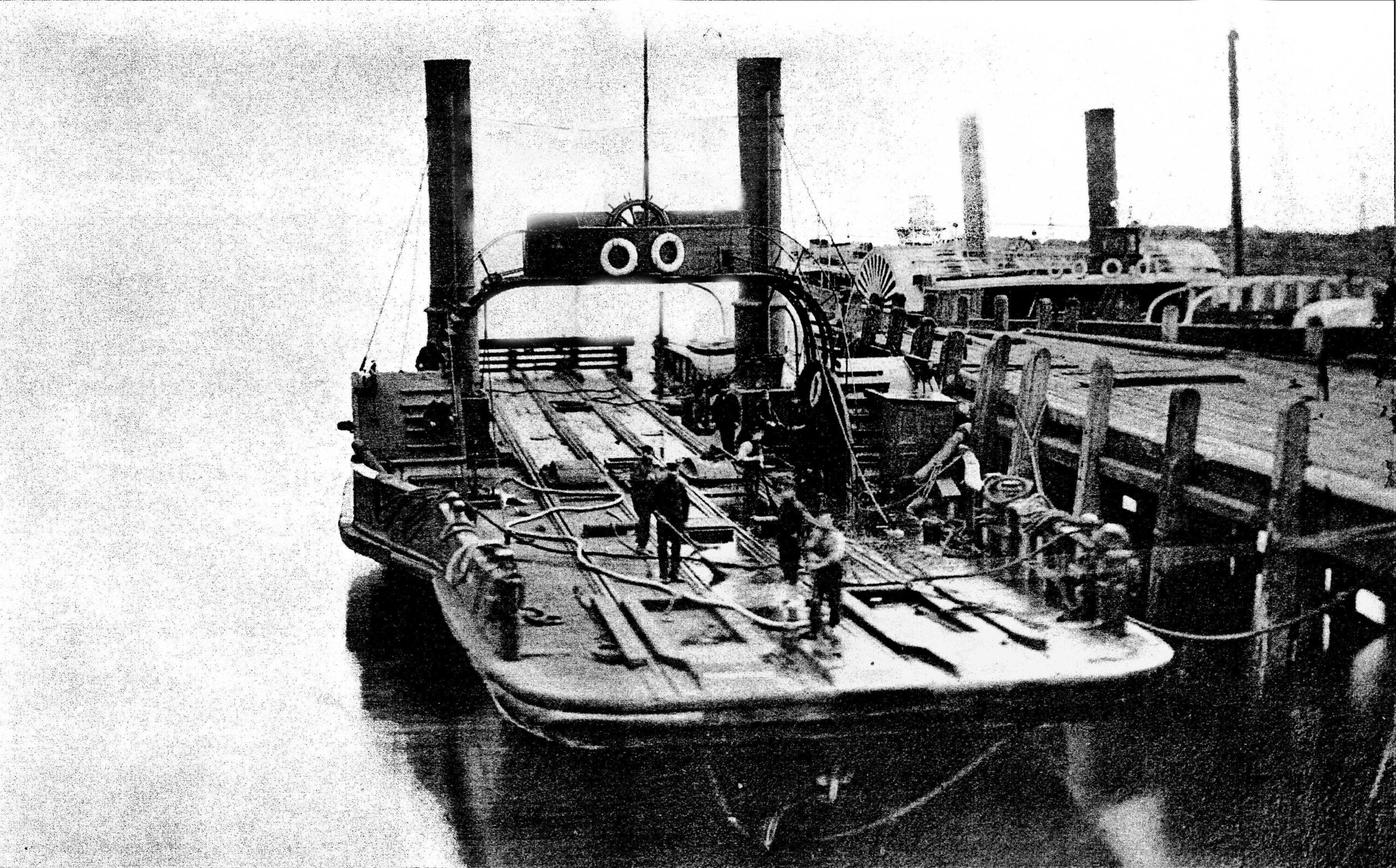 The first export cargo of coal from Tayport was shipped to Cape Town in the ‘Gazelle’ of Arbroath (Captain Leslie) in 1852 and thereafter sometimes a dozen or more sailing ships, mainly destined for the Baltic or West Indies, could be queueing for their turn at the wooden framed loading staithe. In 1860 there was shipped:- 30,000 tons of coal, brought by railway from collieries in the west of Fife, 8,662 quarters of grain and 78 cargoes of potatoes amounting to upwards of 5,000 tons. During the same year, 328 sailing vessels and 71 fishing boats entered the harbour. 41 of those sailing vessels were from foreign ports with cargoes of timber, guano and grain. Imports later also included, esparto grass for Guardbridge Paper Mill, barley for Messrs Haig’s Distillery at Cameron Bridge, china clay from English Channel ports and fertilisers. Improved coal loading facilities were required to cater for the high level of activity, often creating a day and night demand and in 1901 a new coal drop of stone built construction was built, to replace the existing timber built staithe. A serious accident occurred in 1920 when the Aberdeen trawler Regina was being loaded at the coal drop from a wagon owned by the Lochgelly Iron and Coal Company.

John Mackay, a coal trimmer employed by Smith, Hood and Company, was discharging a wagon from the coal hoist into the trawler when 3 wagons broke free from a train of sixteen wagons and came rushing down the incline towards the hoist. The wagon Mackay was discharging was hit, he was knocked into the water and died a few weeks later from the injuries sustained. The North British Railway Company was later found responsible following the trawler owner’s appeal to the House of Lords and damages of £695 were subsequently awarded for the loss of his vessel. The other trimmer Ritchie managed to jump clear. Changes in fuel requirements however, saw the last of the bunkering coal for the Dundee trawlers cease in the 1950s. It is believed the largest ship to enter the harbour was the ‘3071-ton Blairlogie’ belonging to Messrs Nisbet of Glasgow, who operated in the Esparto grass trade which moved elsewhere after the war. (Evening Telegraph Shipping Correspondent 1983) A press report in the Scotsman advised the Blairlogie was sunk off the coast of Ireland in the early days of the war on 11th of  September 1939, by U-boat activity whilst crossing the Atlantic from Portland USA carrying a cargo of scrap iron. All the crew survived and were rescued and taken to America by a passing US steamer. 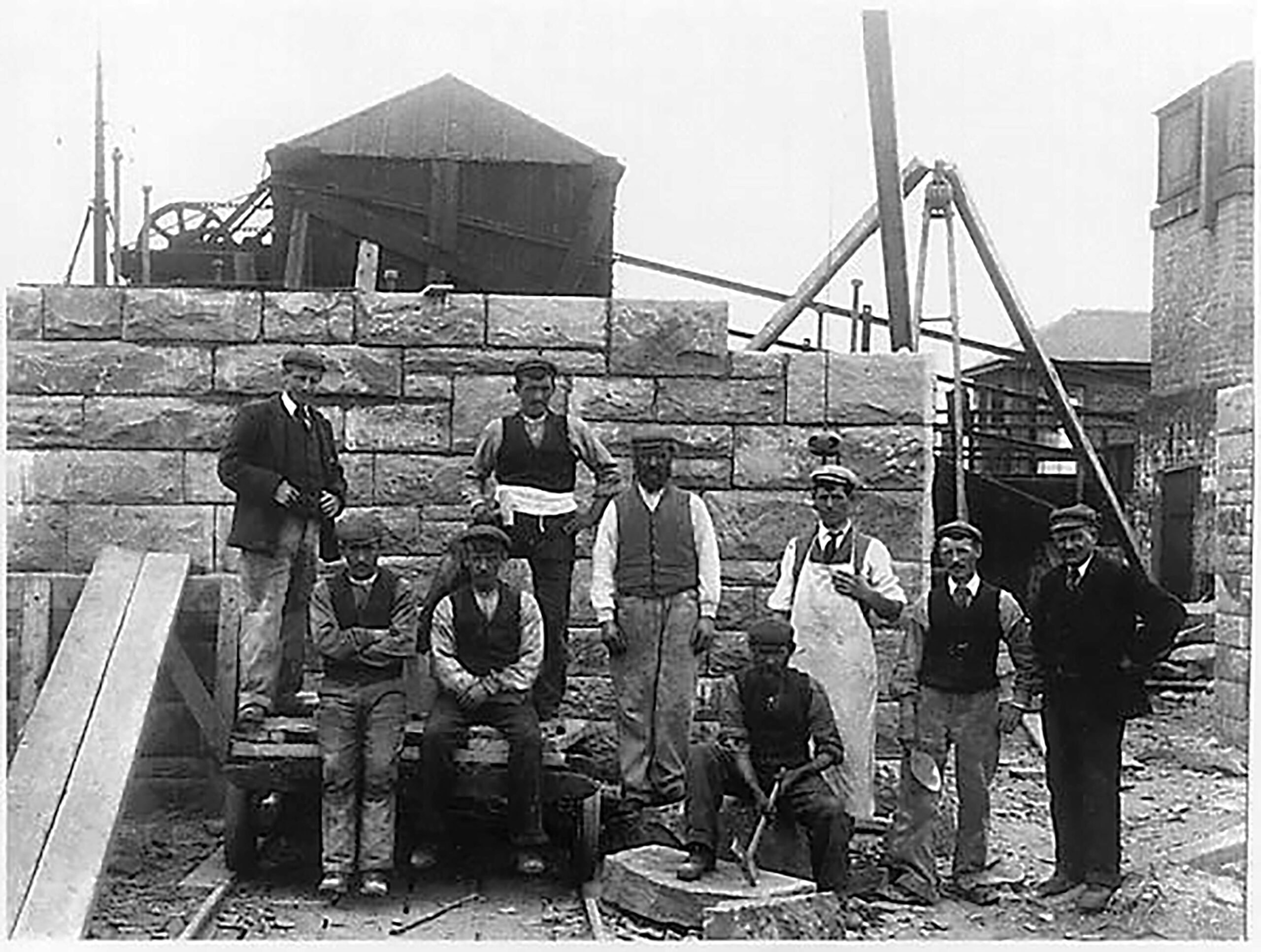 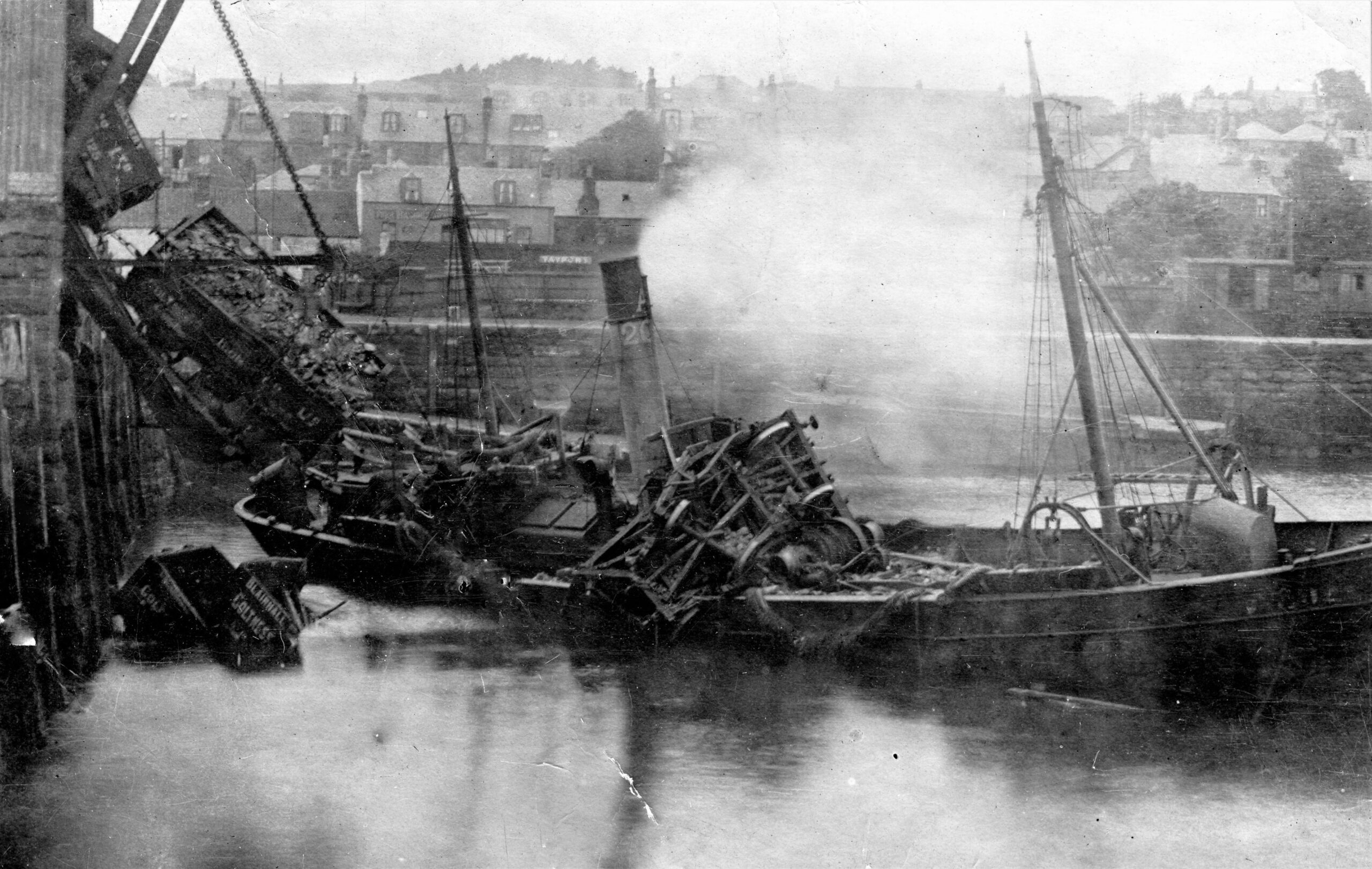 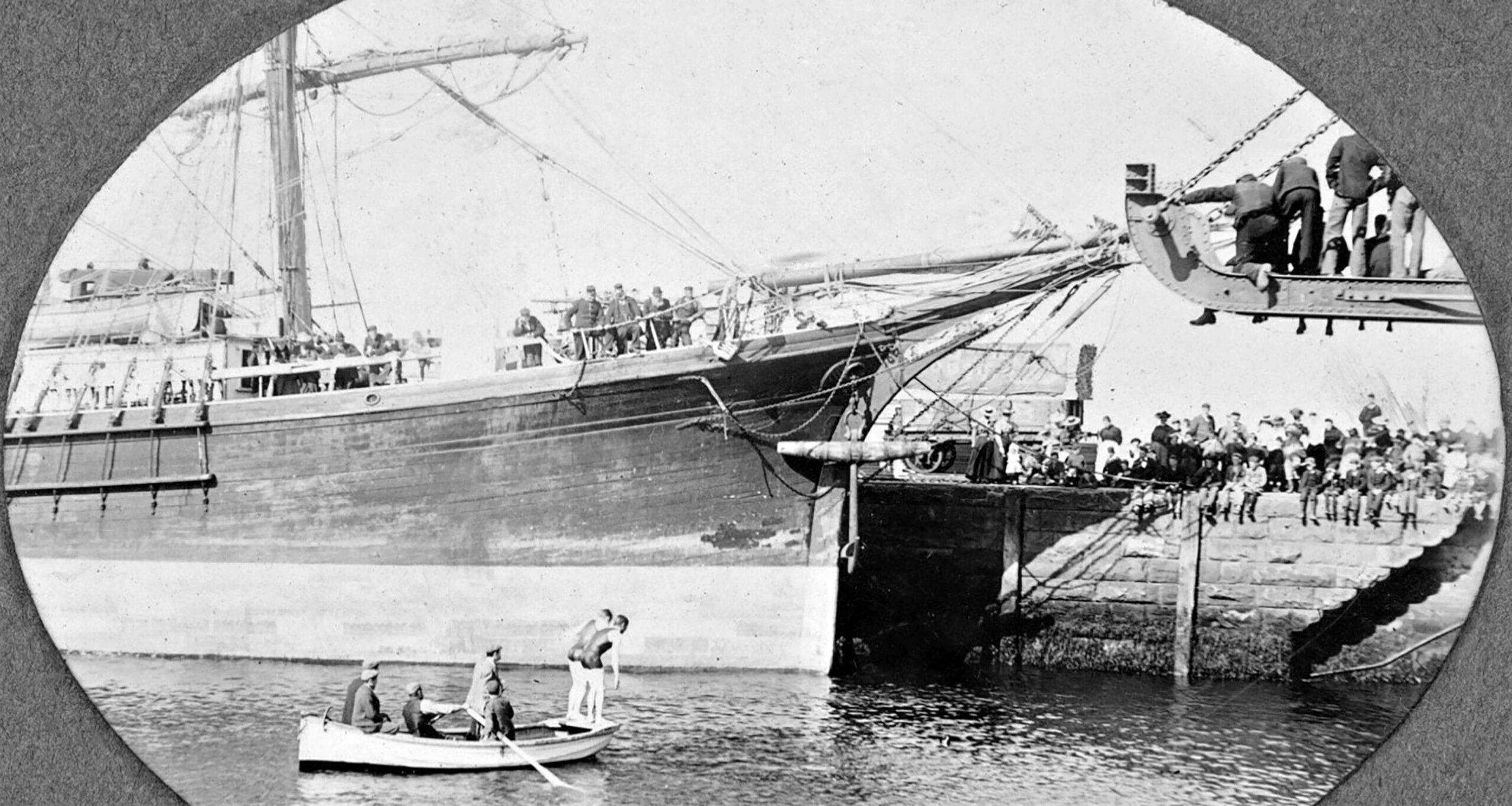 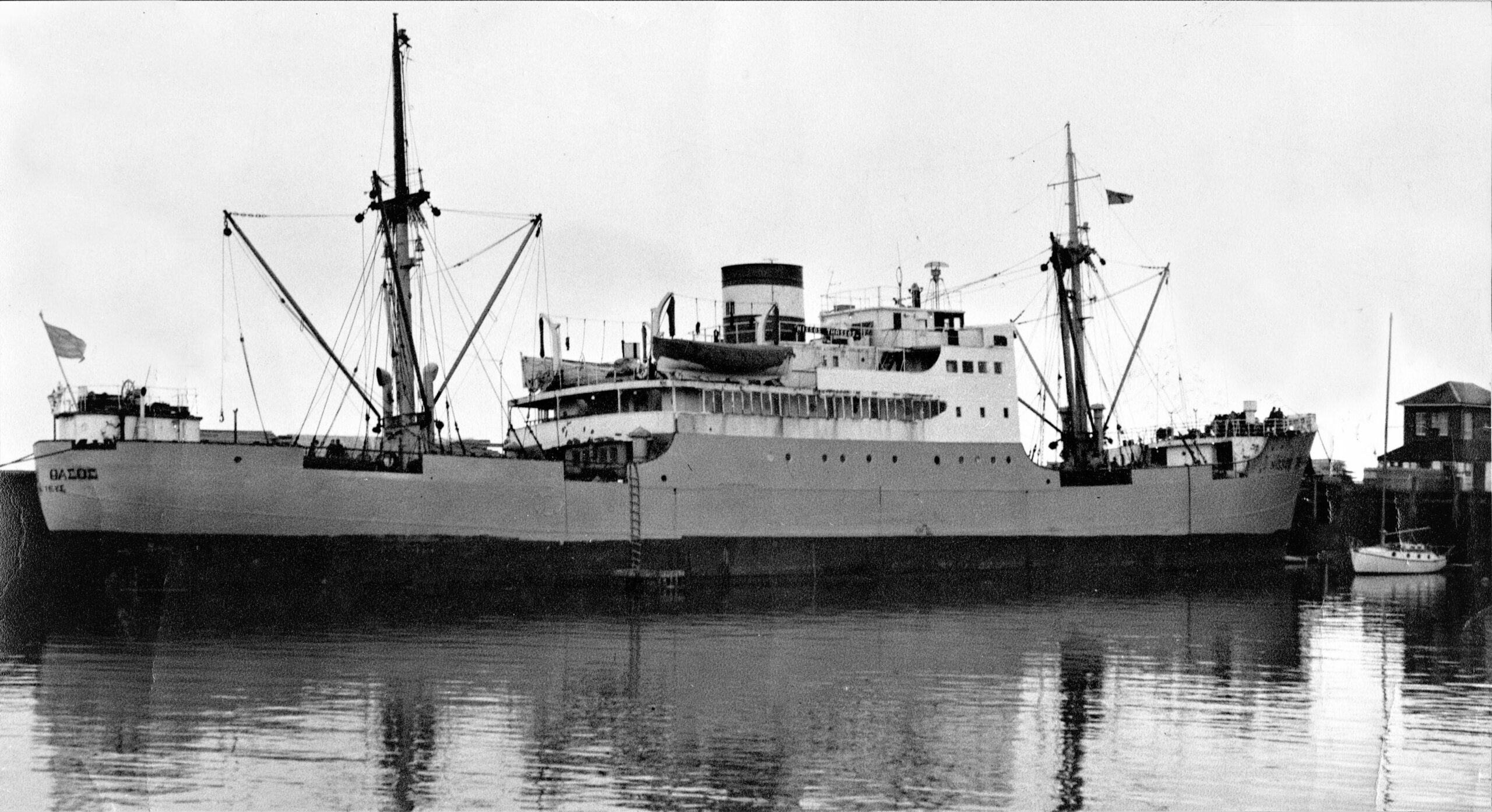 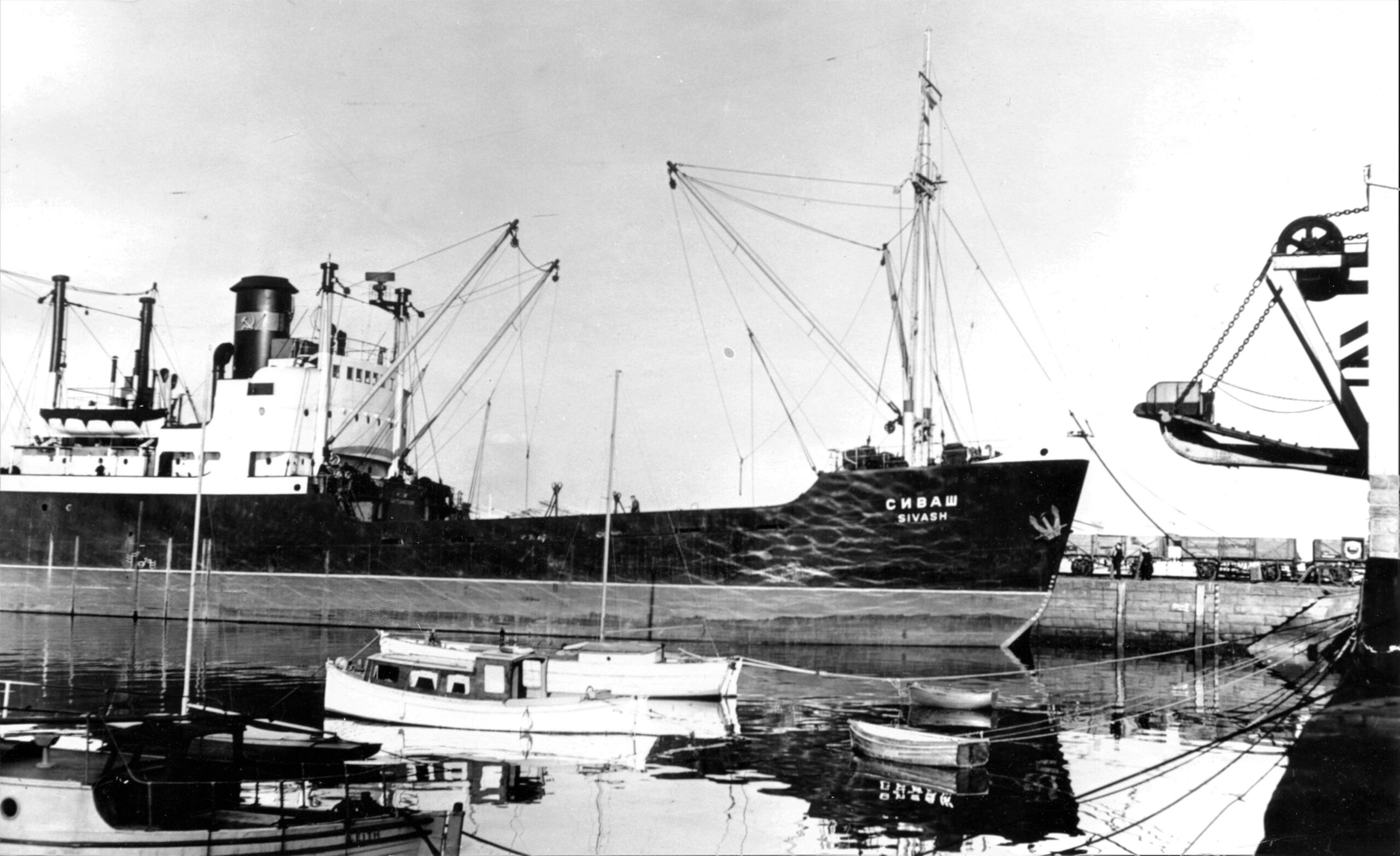 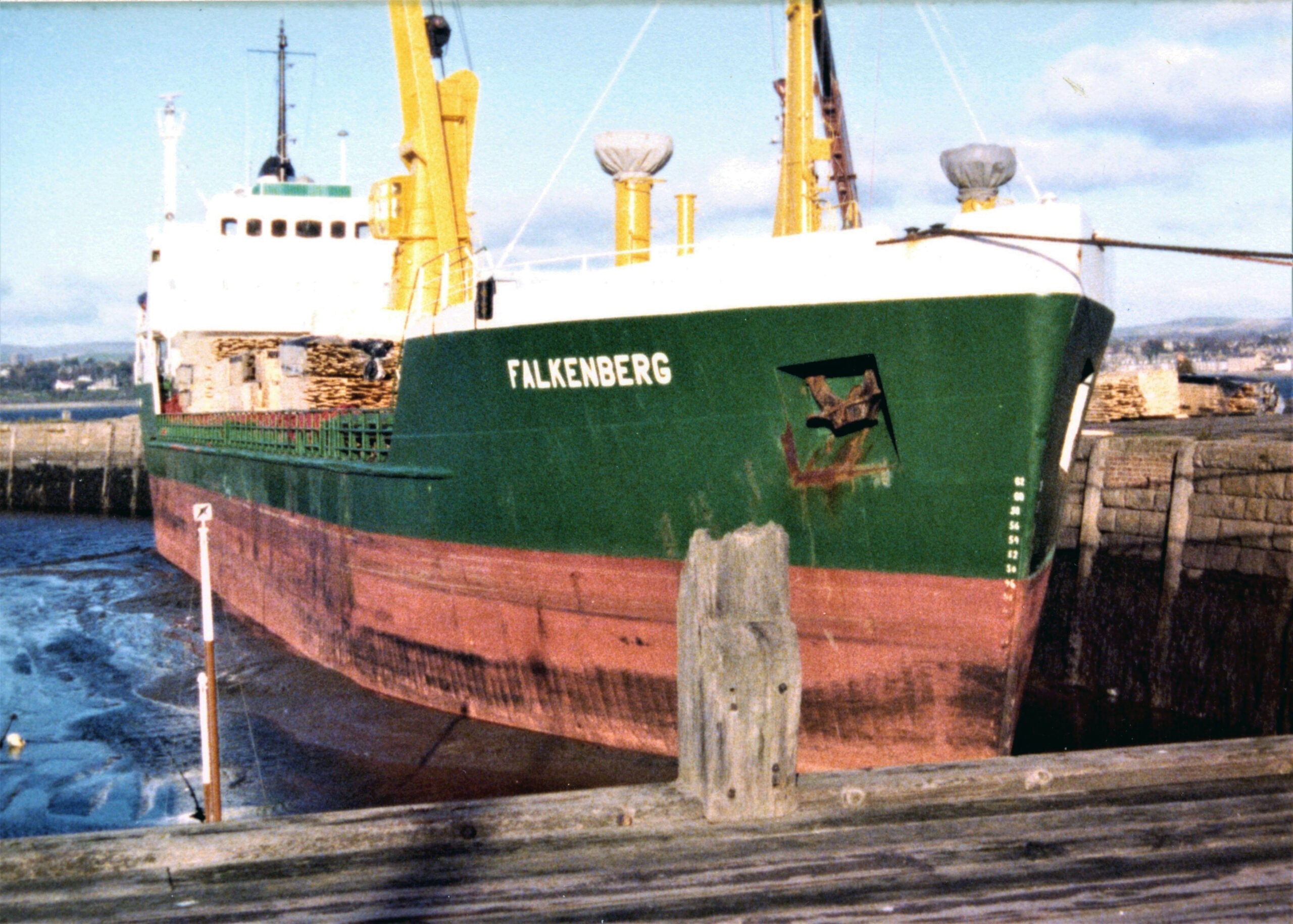 The marine service was based at the harbour from 1943 until 1958 in conjunction with the nearby RAF Leuchars. The modified slip which contained their maintenance shed, had been the location of the Thos. Bouch wagon ferries operating between 1851 and the opening of the replacement Tay Rail Bridge in 1887. Their former billets located behind  the coal drop, were latterly used as a base by the dredging company Lorimer Marine Tayport, prior to their subsequent demolition and the removal of embankments. This facilited the construction of the residential apartments development, in the 1990s. 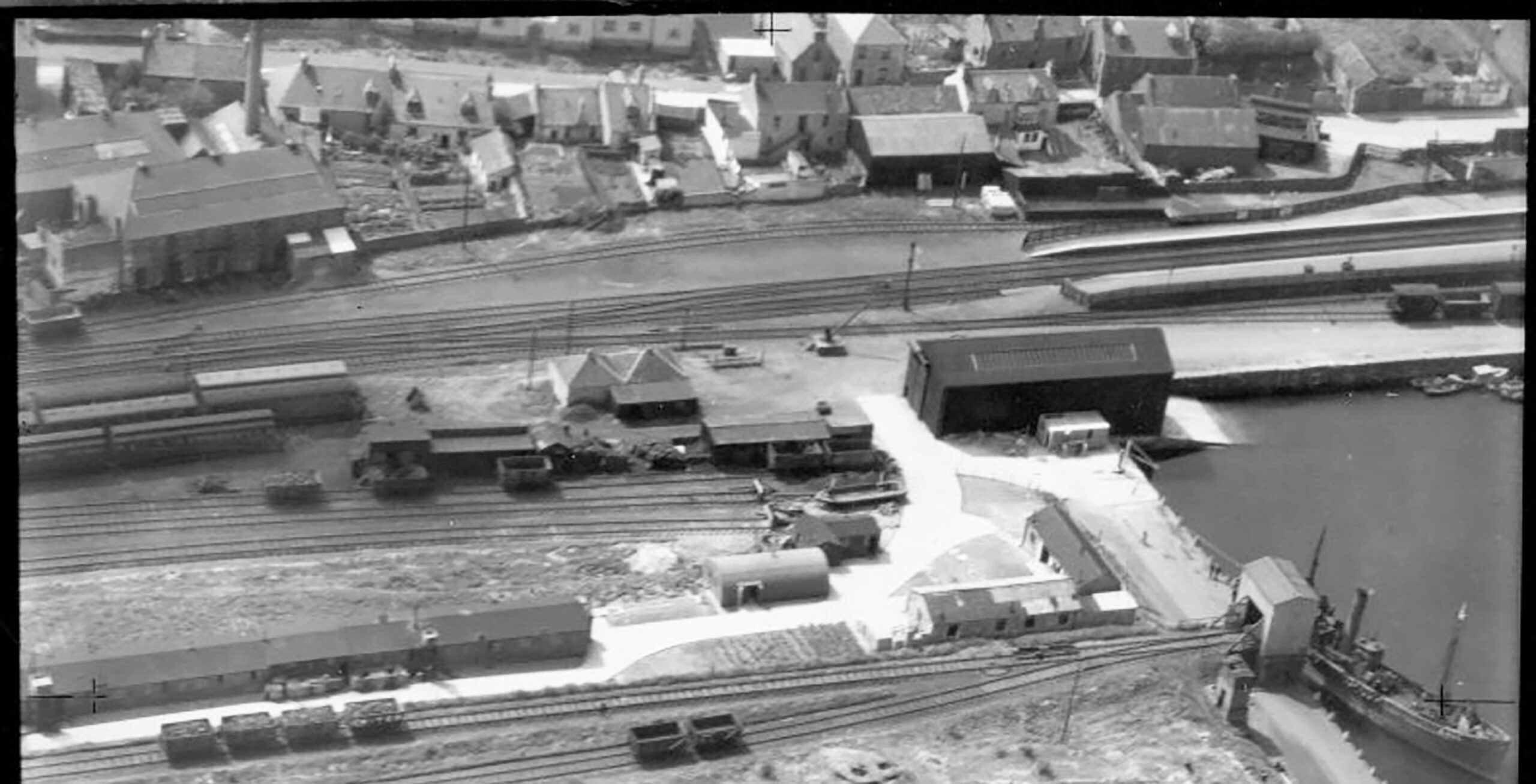 In the earlier days when large cargoes of timber logs were brought into the harbour by sailing ship, it was reported by Sam Hardie (1951) that the logs were often “pushed out through hatchways fore and aft, then formed into large rafts held together by heavy chains and steel-dogs driven into the timber and floated out of the harbour and round between the Lairick (sic)Dyke and the shore, to the beach opposite the sawmills, here to lie until they were required for sawing up.” 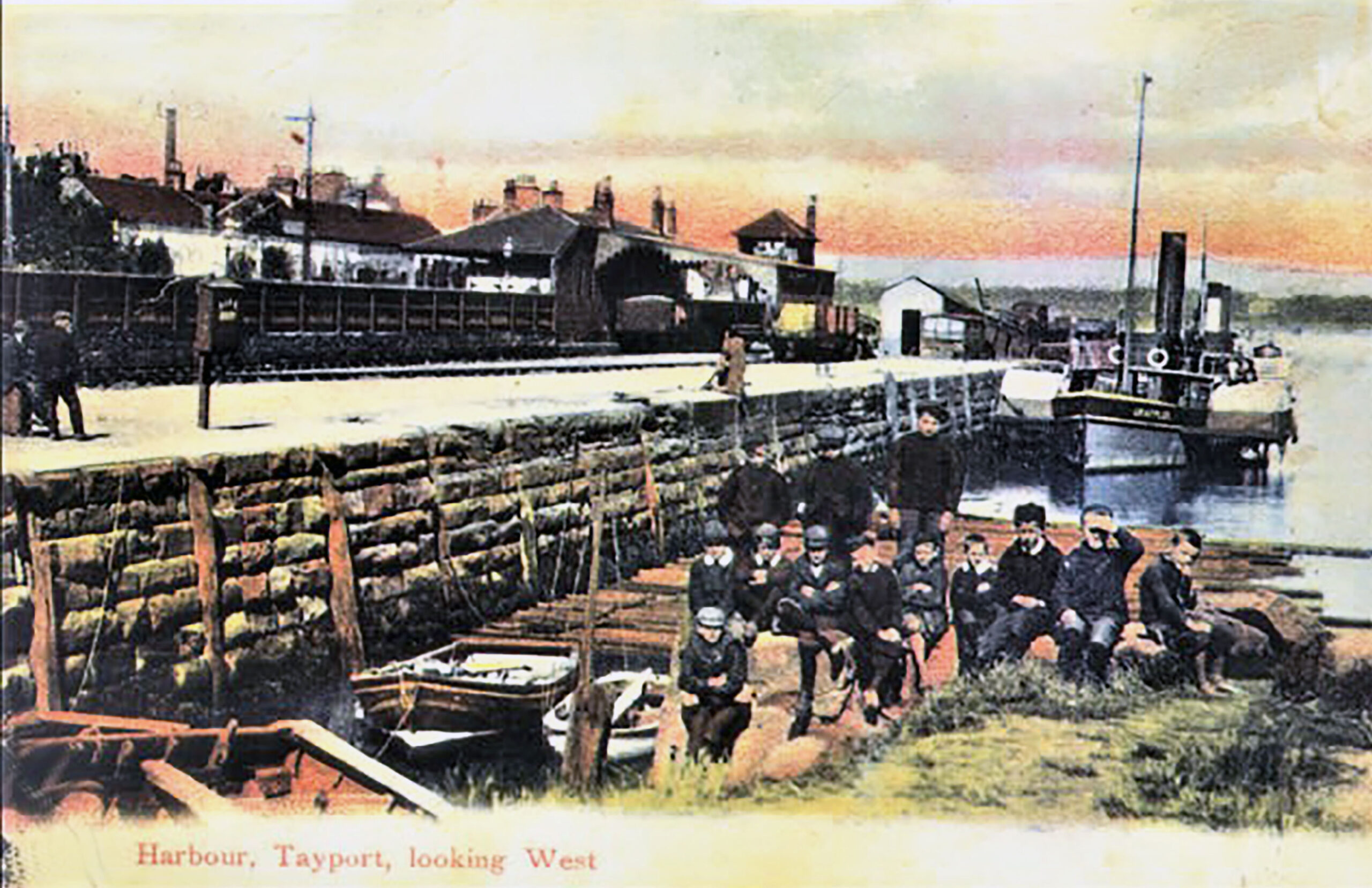 Logging raft ready for floating round to sawmill beach