The church has been in this location since at least 1607 (date stone on south east elevation) following the creation of the Parish of Ferry-Port-on-Craig, when the area was disjoined from the Parish of Leuchars in 1602 and was erected by the Scottish Parliament in 1606. In the Statistical Account of 1793, the Rev. Robert Dalgleish advised “ The King is patron. The present incumbent is the 8th minister since the Revolution, and has been 32 years in the parish. The value of the living varies according to the price of grain and in money the sum of 17pounds. 11s. 8d. Sterling; 10s. of that sum is paid by the proprietor of Leuchars for Salmon fishing. The proprietor of Scotscraig pays the whole stipend, except the 10s. just mentioned, and holds up the kirk, manse and school.” 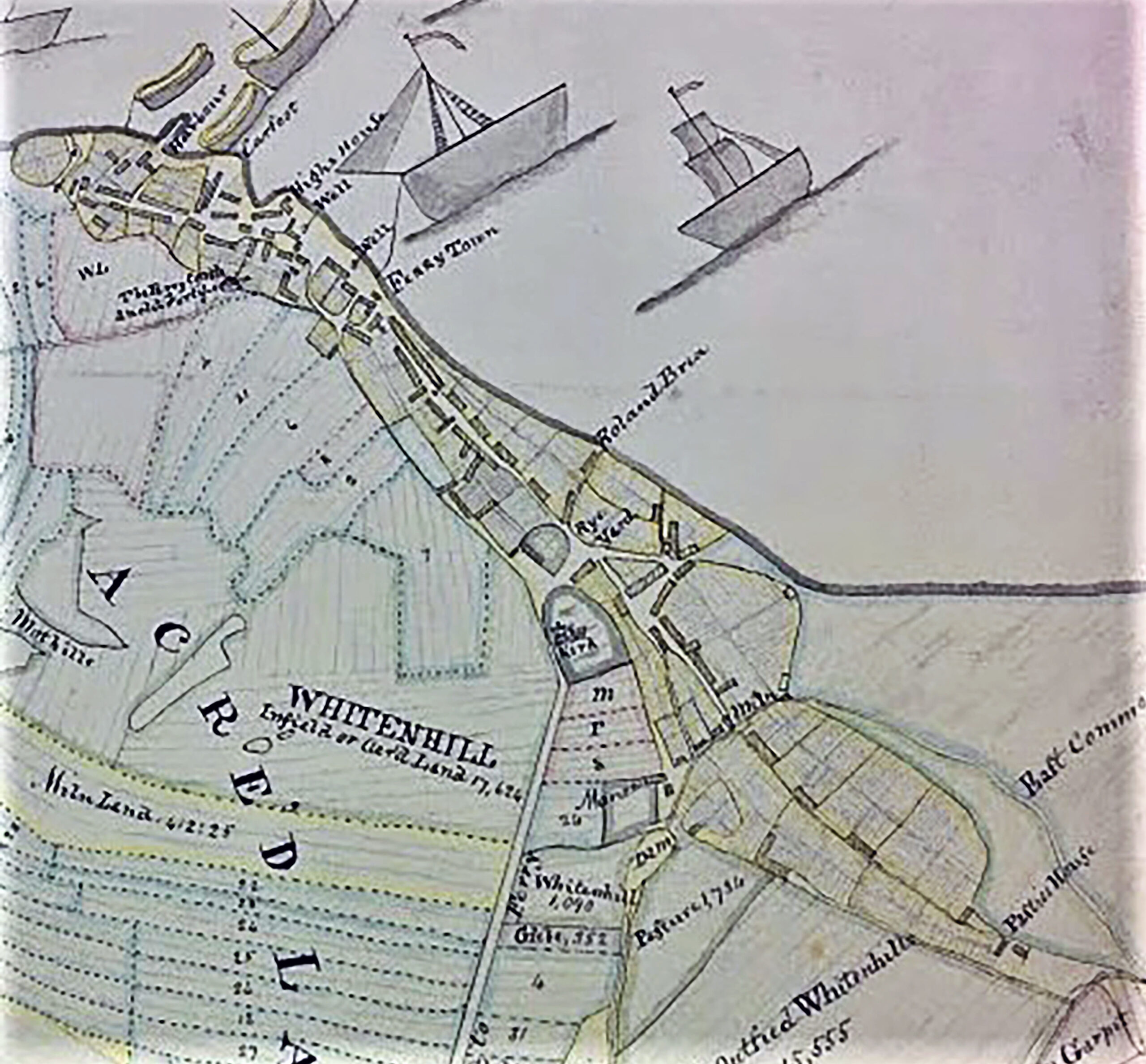 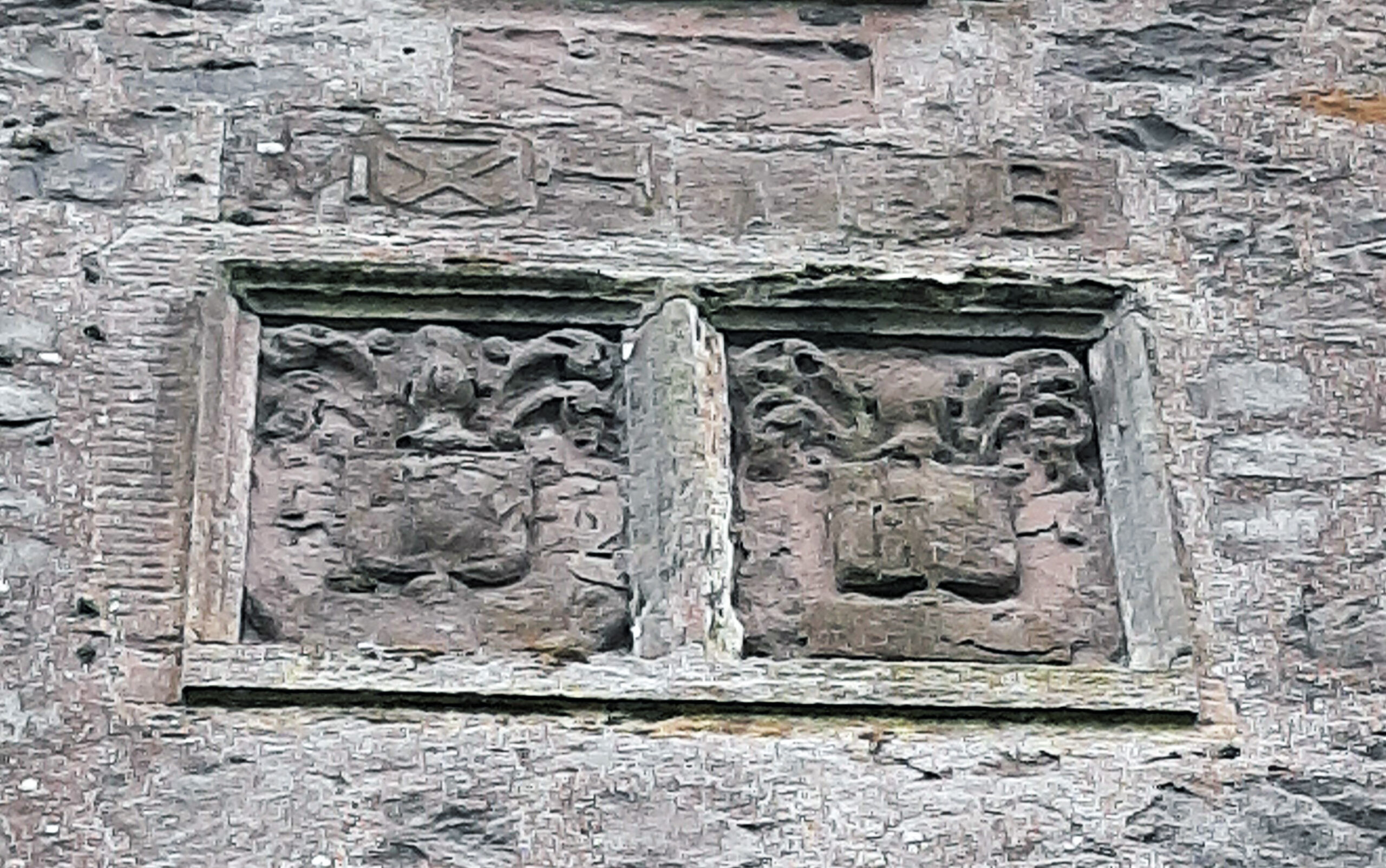 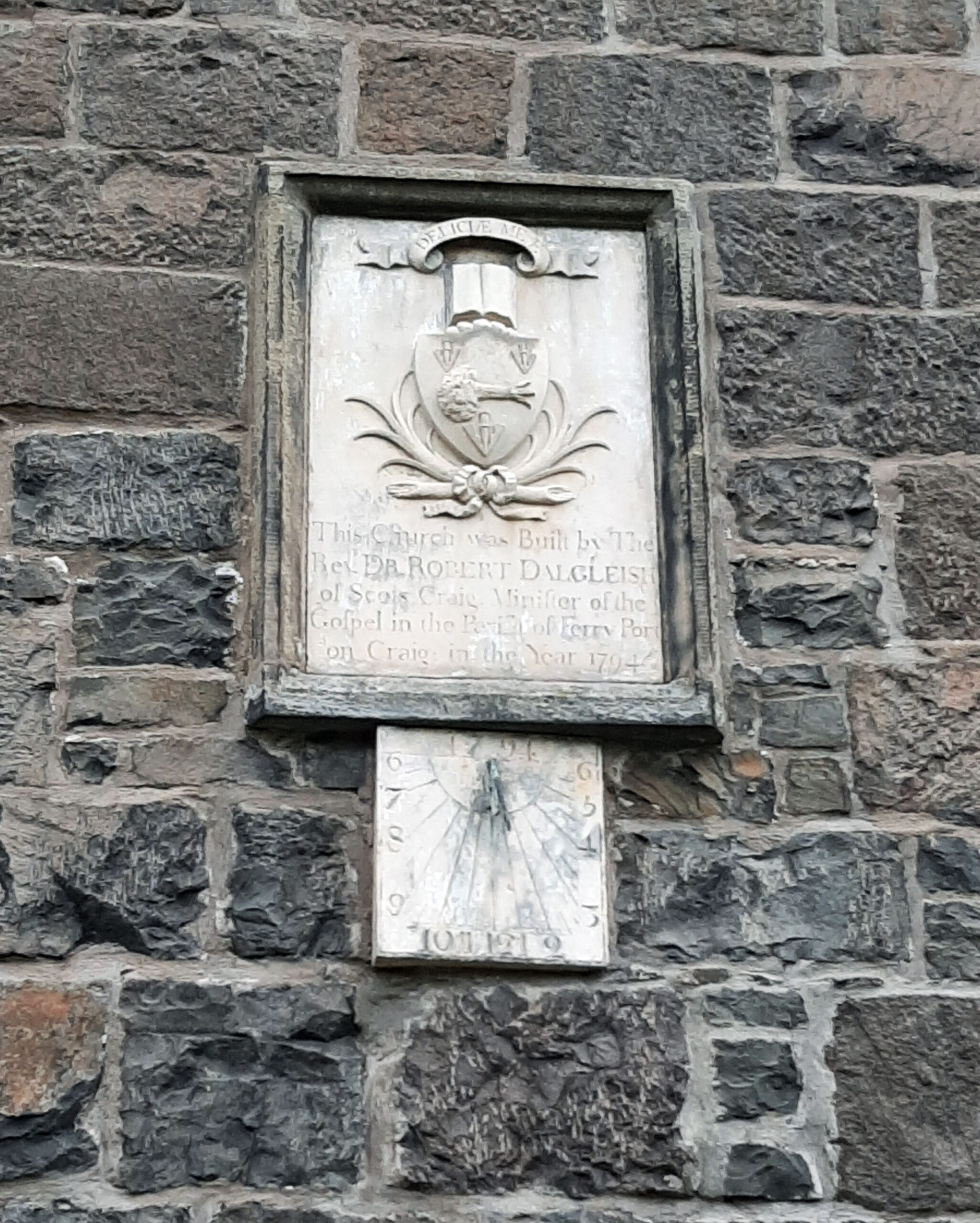 Dedication stone from the 1794 building relocated onto organ extension circa 1890s (Rev. Dr. Robert Dalgleish of Scotscraig – minister of parish 1794)

The proprietor of Scotscraig in 1606 was Sir John Buchanan and both his initials and those of his wife, Margaret Hartsyde, appear on the wall of the church tower along with their respective coat of arms. The coat of arms of their son-in-law Sir Arthur Erskine and his wife Margaret, are also displayed. There was some notoriety surrounding Lady Hartsyde who stood trial in May 31,1608, regarding the loss of jewellery during her service to Queen Anne, wife of James VI, however no conviction could be recorded. Initially banished to Orkney, she was recalled in the following November. The present church building was erected in 1794 by Rev. Robert Dalgleish in his capacity as Laird. He was minister of the parish from 1759-1794 and had followed his father William, Laird of Scotscraig, who was also minister of the parish from 1739-1759. It ceased to be used for regular worship when its congregation was amalgamated with the Queen Street congregation in 1978 to form Tayport Parish Church. The Auld Kirk building is maintained under the auspices of Ferry-Port-On-Craig Church Preservation Trust constituted in 1983, with the only service held being the traditional Christmas carol concert. 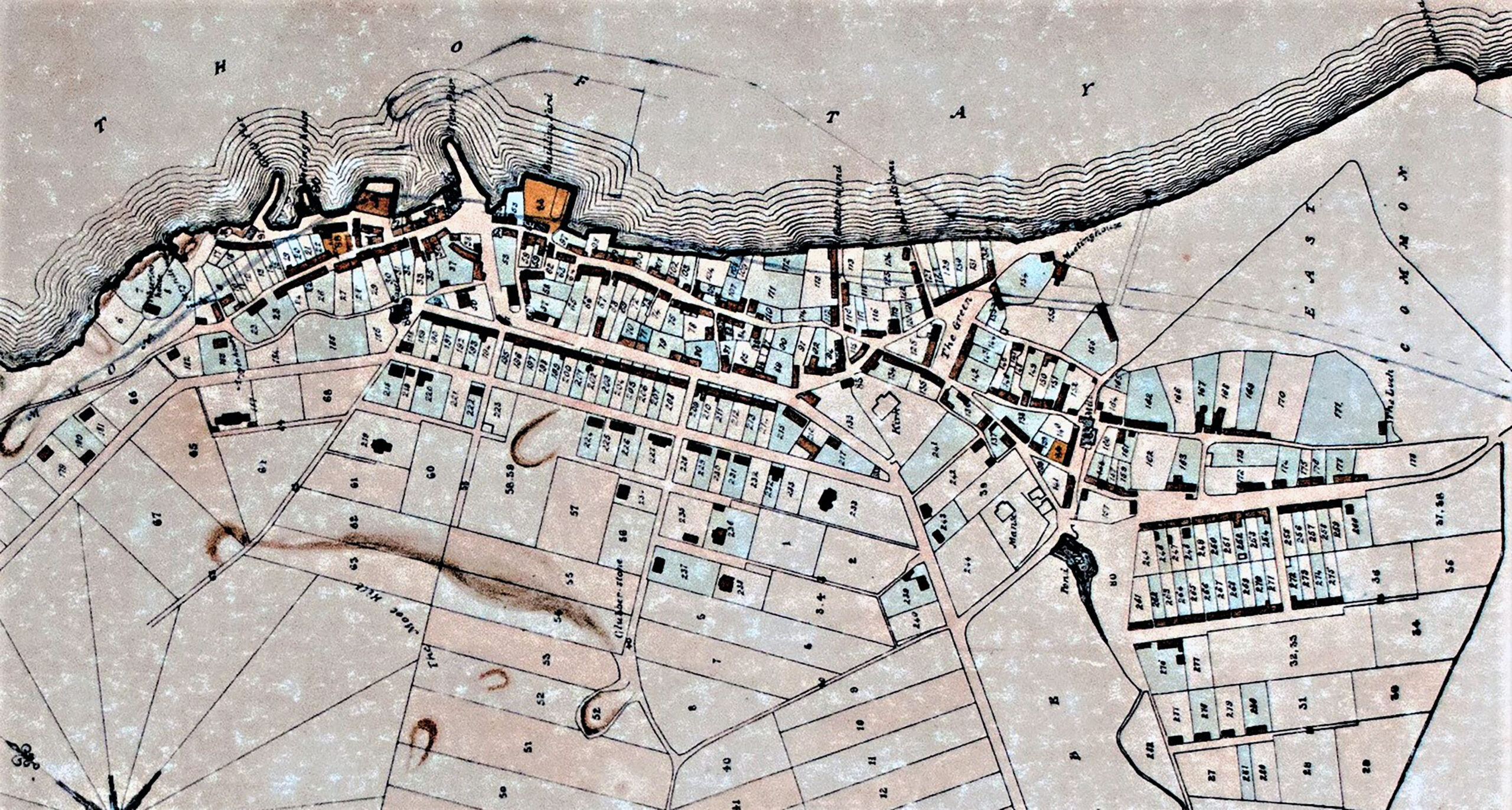 The Statistical Account (SA) noted “all the churches in the Parish are inside the burgh, which is well provided with places of worship for a town of its size – perhaps too well provided for modern requirements.” Queen Street Church was built at the time of the Church of Scotland Disruption in 1843, as was the Erskine Church in Castle Street which along with the Auld Kirk meant there were three congregations of the Church of Scotland at that time. The Salvation Army first had a presence in Tayport in spring 1883 when a ‘deputation of the Army from Dundee arrived on the four o’clock boat and paraded the streets endeavouring to obtain purchasers for the War Cry’. The organisation proved popular in the town and by autumn that year ‘a goodly number of soldiers had been enlisted’. Some activities weren’t so popular however and ‘there were complaints in consequence of their parading the streets shouting and singing as early as seven o’clock on the Sabbath’. Their Saturday evening soirees in the Temperance Hall attracted attendances of up to 300 and by 1898 the Tayport Salvation Army had its own brass band and met in the Salvation Army Mission in Butter Wynd.  The formation of the United Free Church, comprised former members of both the Queen Street and Erskine Churches who were opposed to the Church of Scotland Union of 1929 which had largely reversed the disruption of 1843.  The United Free Church congregation worshipped for a time in the Temperance Hall until a modern church, complete with hall, was erected in King Street in 1931.

“A Roman Catholic Chapel, of graceful modern architecture, dedicated to Our Lady Star of the Sea, was built on a site in the Cupar road in 1938. In addition to these, there are three smaller religious bodies – a Scottish Episcopal Church, rather poorly attended; a few Plymouth Brethren; and a Faith Mission ….”  A trend of reducing attendances was in direct contrast to the press report of 30th November 1882, which advised “a new church was being constructed of timber to accommodate the wants of the inhabitants at the mill houses”. (SA 1952) In 1962, the Erskine Church congregation amalgamated with the Auld Kirk congregation to form the Erskine Ferry-Port-on-Craig congregation. The Castle Street building was subsequently converted, initially for commercial purposes then to a residence. The trend of reducing attendances identified in the 1952 S.A. has continued as reflected throughout Scotland. By 2020 there was no full time minister resident in the town, with regular services held by either visiting clergy/priest or lay preachers at The Parish Church, Queen Street, The United Free Church, King Street, St Margaret’s Scottish Episcopal Church, Queen Street, Our Lady of The Star Roman Catholic Chapel also in Queen Street and the Gospel Hall in Butter Wynd.

Provides a unique insight into the lives of our forebears and the detailed survey of the inscriptions of the gravestones and walls of the church building, makes fascinating reading. The date 1607 date stone hewn into the south east gable facing the mouth of the river, indicates when the original church was built and was reported as having a thatched roof. The current building was constructed in 1794, with further rebuilding work in 1825. The pipe organ was installed in 1899 into a specially constructed extension which may have contributed to the twist that has developed in the tower itself. The references from the  survey of graves include:- No.2 Robt. Culross, Tay Bridge disaster 1879, No.3 Geo. Black, wreck of the steamboat Forfarshire (Grace Darling rescue) 1836, No.48 John Scot, tenant Oldmuirs 1775 (Tentsmuir Forest), No.96 David Henderson, weaver 1792, No.97 Geo. Ross, manager harbour works ( pre-railway) 1819, No.100 T. Imrie deceased 1642 being of age 75 (born prior to formation of separate Parish), No.120 John Berrie, tenant Ferrie Mill 1757, No.151 Walter Key, maltman 1696, No.166 John Frislo younger in the South Ferrie 1617, No.168 (chapel about one mile south, now in a field) Johne Barrie skipper 1613. The reference to the location of the former Chapel at the foot of the Loan provides, a link to the continuing demand for burial ground to cater for an expanding community as it reportedly received consideration for the location of the new cemetery. The new cemetery was constructed however on the Newport Road and declared open in September 1887. The last 134 years of community life is also well represented by its many headstone inscriptions of considerable interest with regard to the heritage of the town. 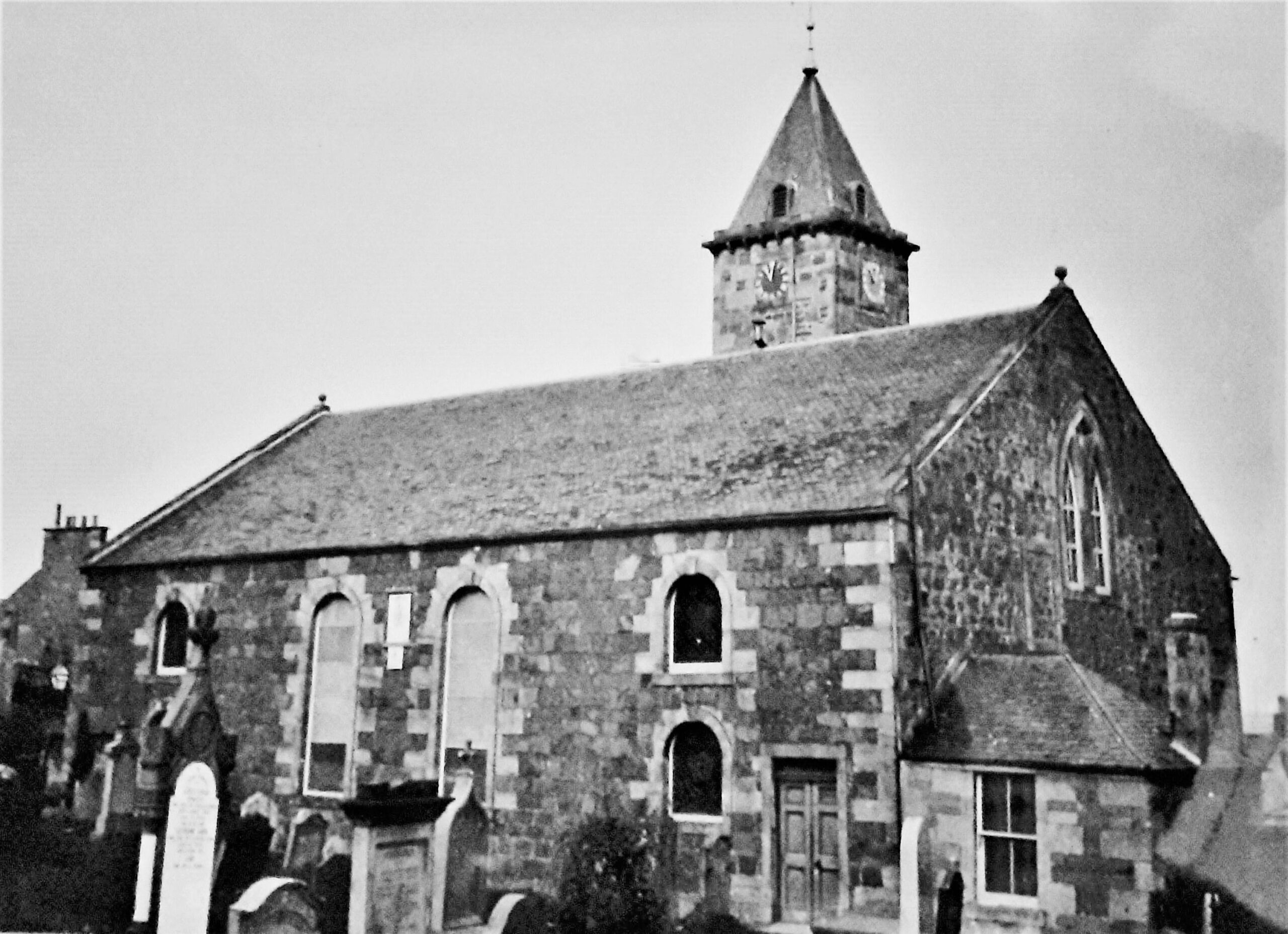 Church prior to construction of organ extension in 1890s 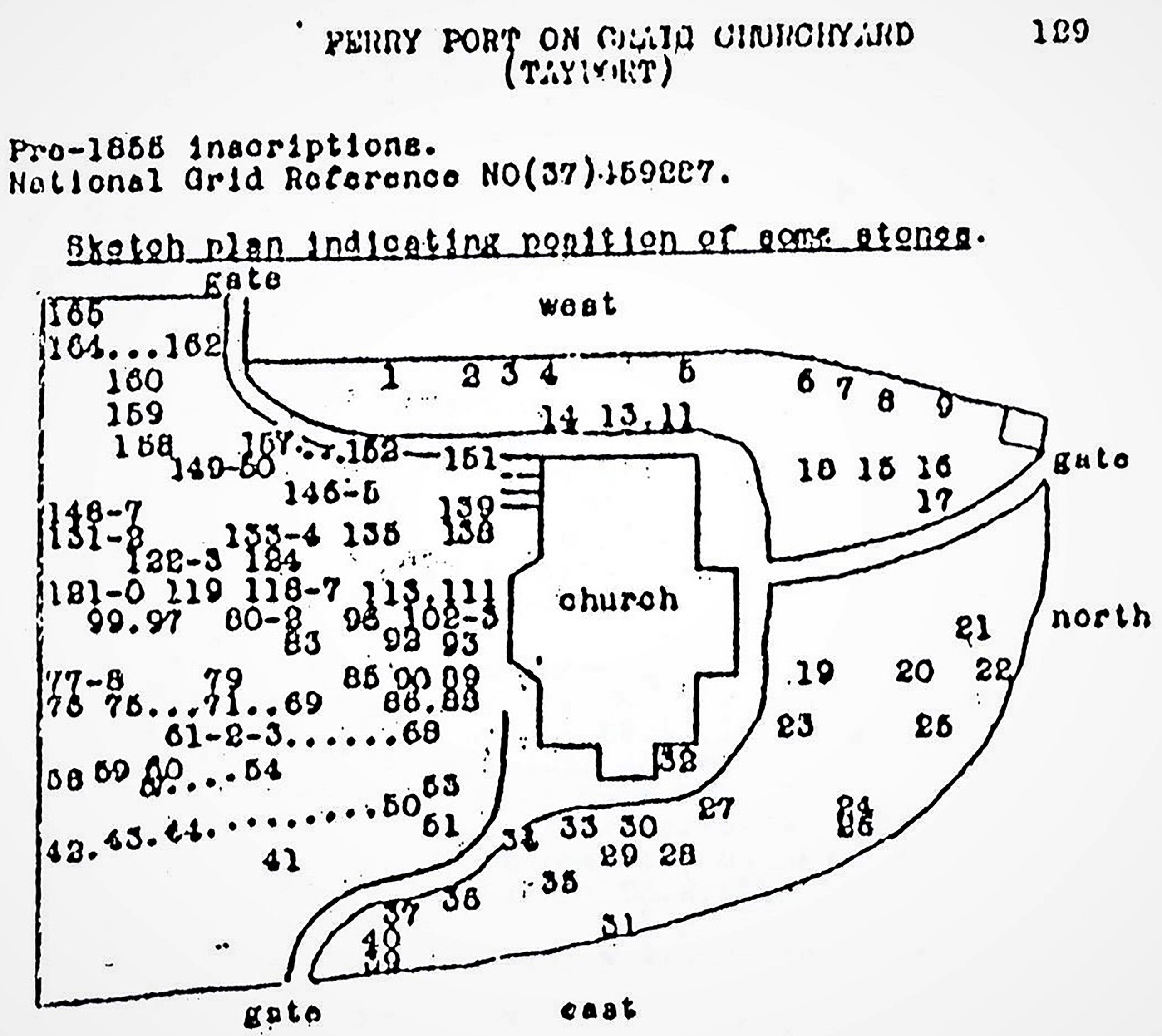 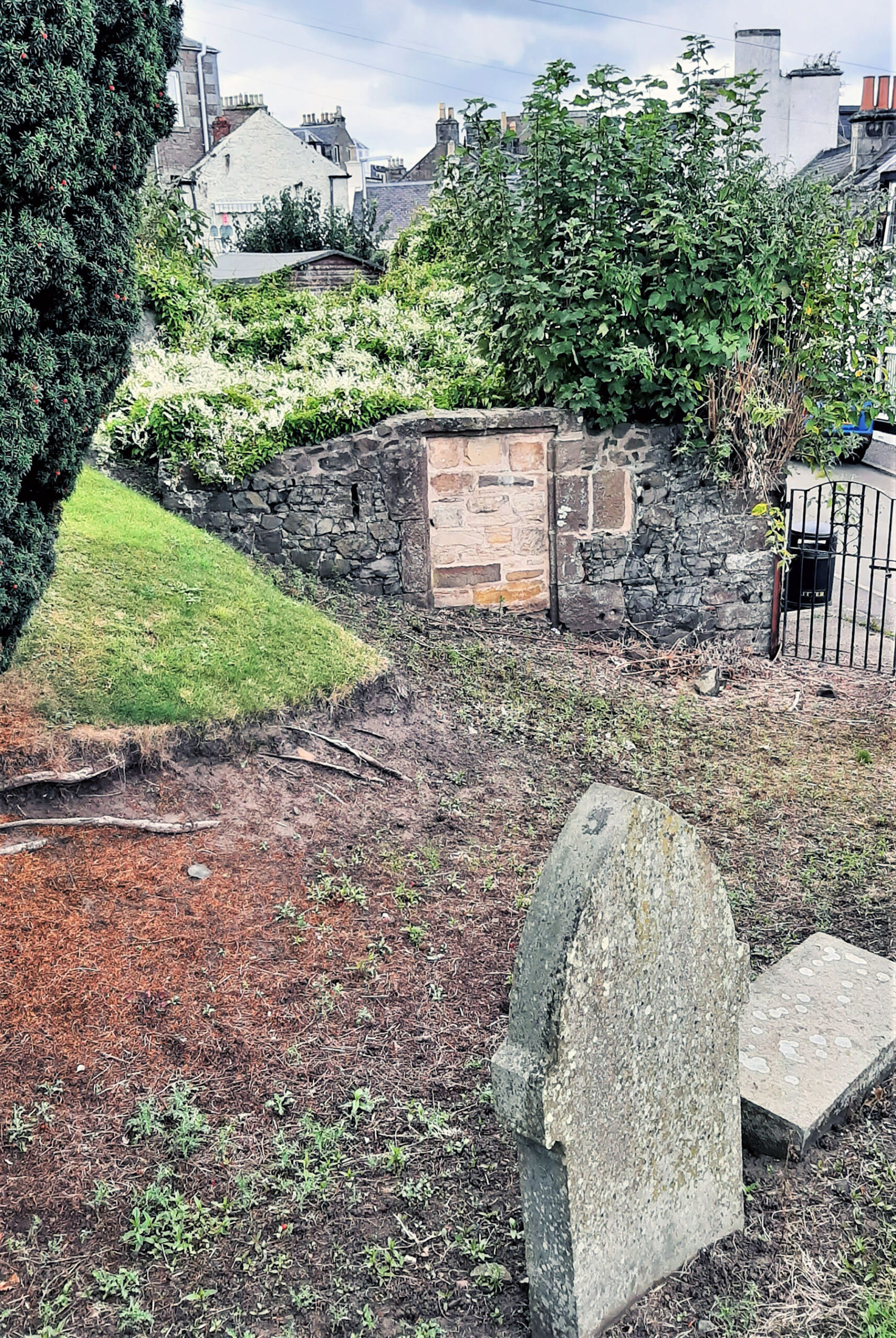 J.S. Neish (1890) refers  to a small portion of the graveyard on the north side of the church being set aside for the burial of strangers. “ It was on the  night of Friday, 25th November 1864, that the S.S. Dalhousie foundered on the banks of the Tay, and every soul on board perished. Day after day the dead bodies of the victims were washed ashore along the beach, and were brought to Tayport, … friends of the deceased gathered in the dead-house in the churchyard to identify the bodies.“  [old mortuary adjacent to  Whitenhill entrance to the churchyard].  Neish also outlines how one poor Irishman named Fermoy, whose friends were at too great distance to claim his corpse, was buried in the “Strangers Ground” in the Churchyard. 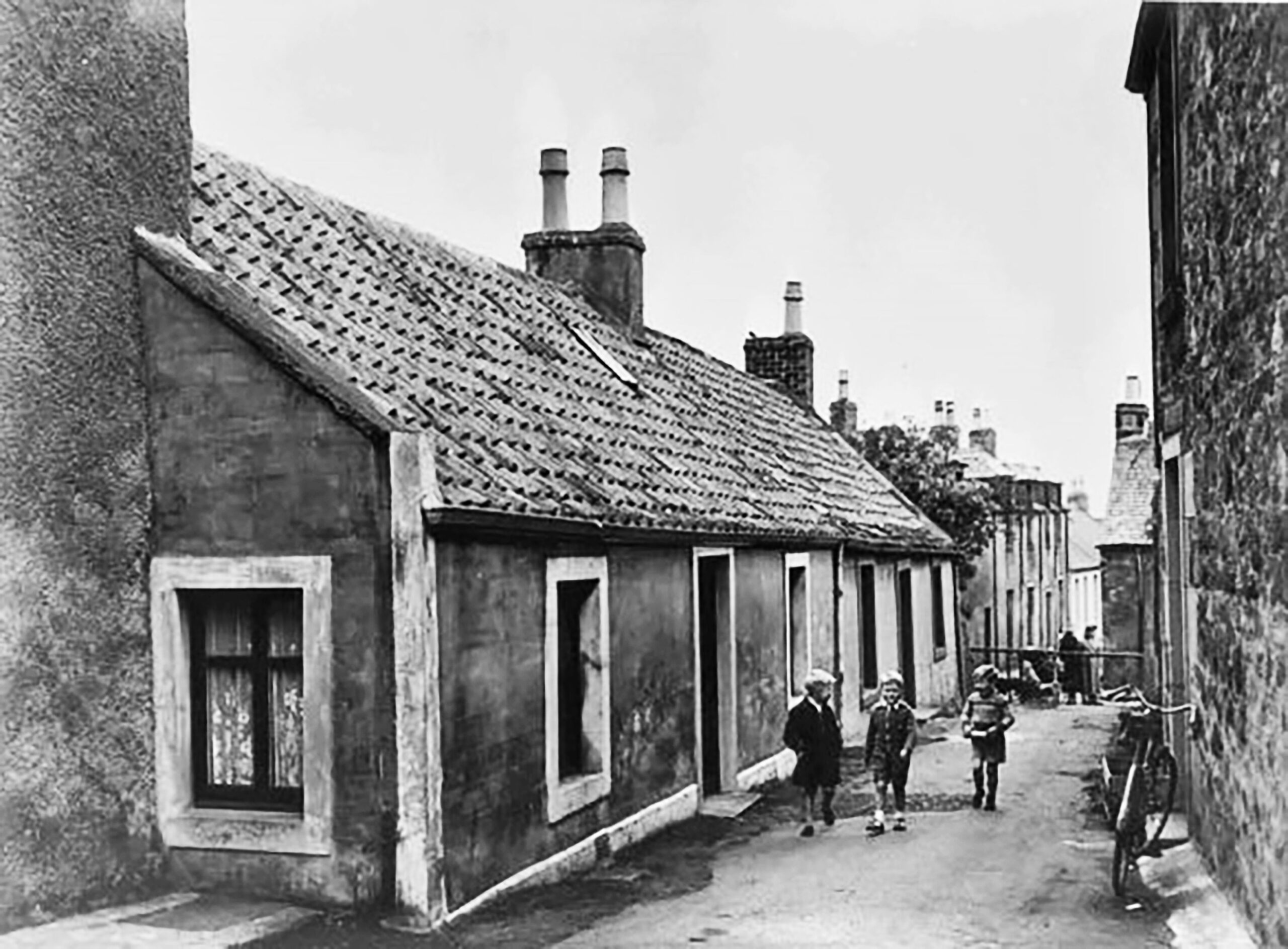 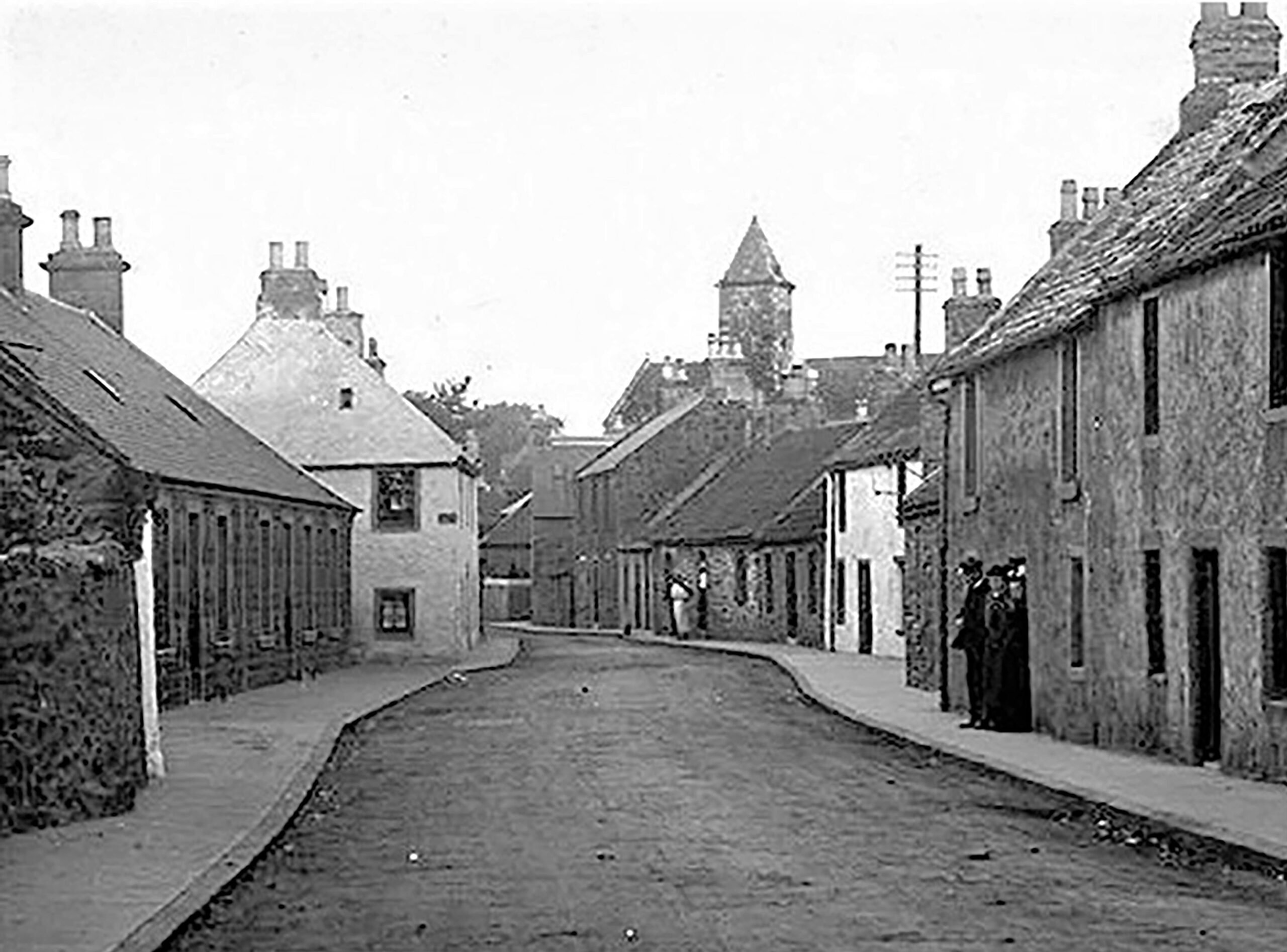