The mill is referred to on the Hope Map of 1769 and is readily viewed once you cross the golf course and as you pass the Garpit Farm on the route to the Morton Lochs Nature Reserve. Grave No. 120 in the auld kirkyard list, shows John Berrie as the tenant of Ferrie Mill at the time of his death in 1757. The mill lade runs through the middle of the building with its date stone of 1817. In 1861 the miller was listed as a Mr. D. Rodger. The water was brought from the location of former Ninewells Farm on the Morton Lochs access road, via what is now the 6th hole of the golf course known as the (Garpit) Pond Hole.

Morton Farm is located just past the Morton Lochs, in the parish of Forgan. It was formerly three quarters in the Regality of St Andrews and one quarter in the Barony of Leuchars and writs from the time of James Sharp, Archbishop of St. Andrews to Peter Hay along with more contemporary records, show it was in the Hay family ownership from 1662 and continued until 1905. The land contains an old Hay family burial ground from that time, with fallen ornate headstones. Under the ownership and support of farmer Gordon Sim, who later became Chairman of the Community Council, archaeological explorations for early  stone age activities of the hunter-gatherer-fishermen, were initiated by an enthusiastic local archaeologist Reg Candow in the early 1960s. Candow subsequently took part in a number of professional explorations which took place in the nearby Quarry Field between 1967 and 1980 and his book “Prehistoric Morton” (1989) gives a fascinating account of the evidence of earliest human occupation on mainland Scotland some 8,000 years ago.  www.pastmap.co.uk 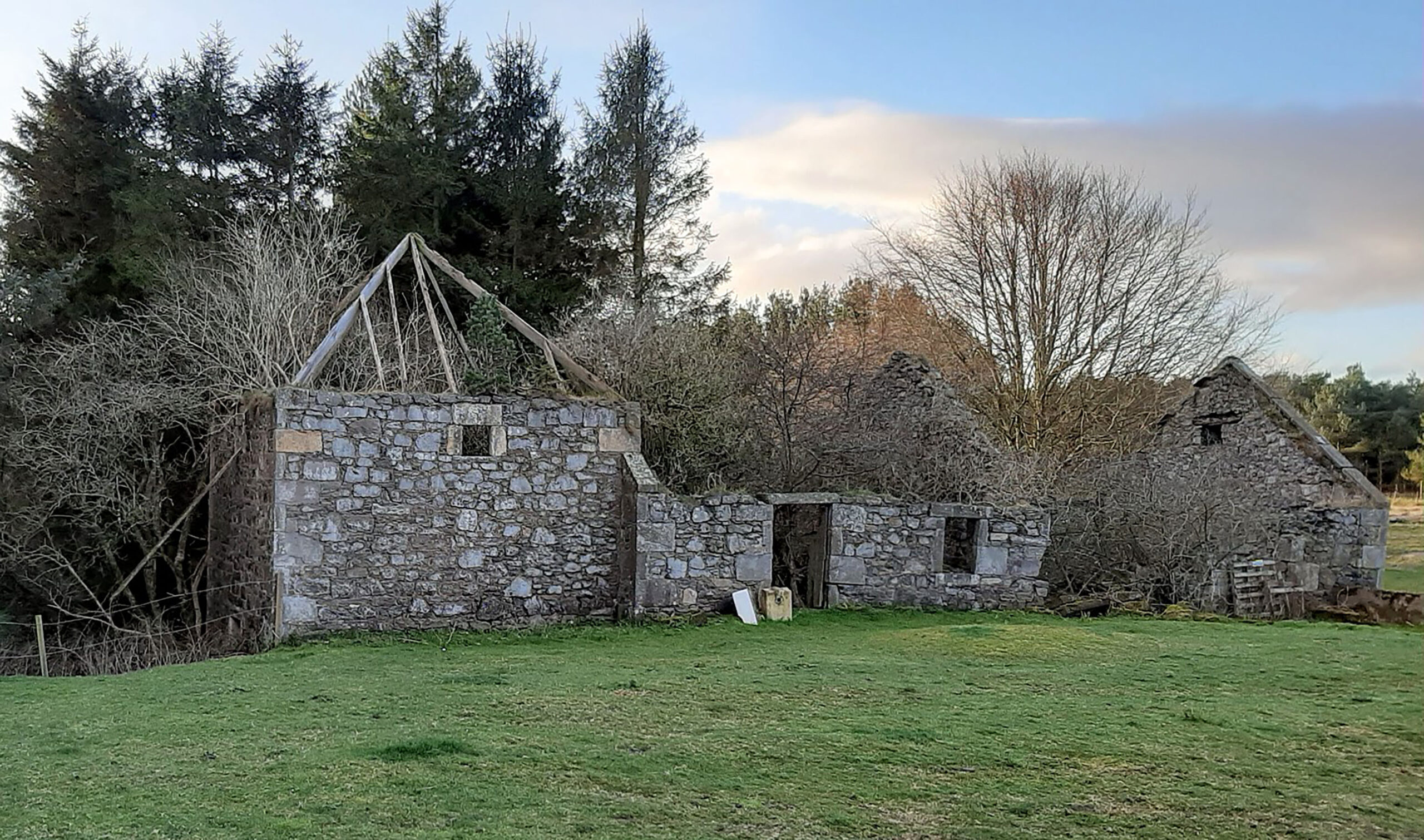 Ruin of Ferrie Corn Mill at the Garpit Farm 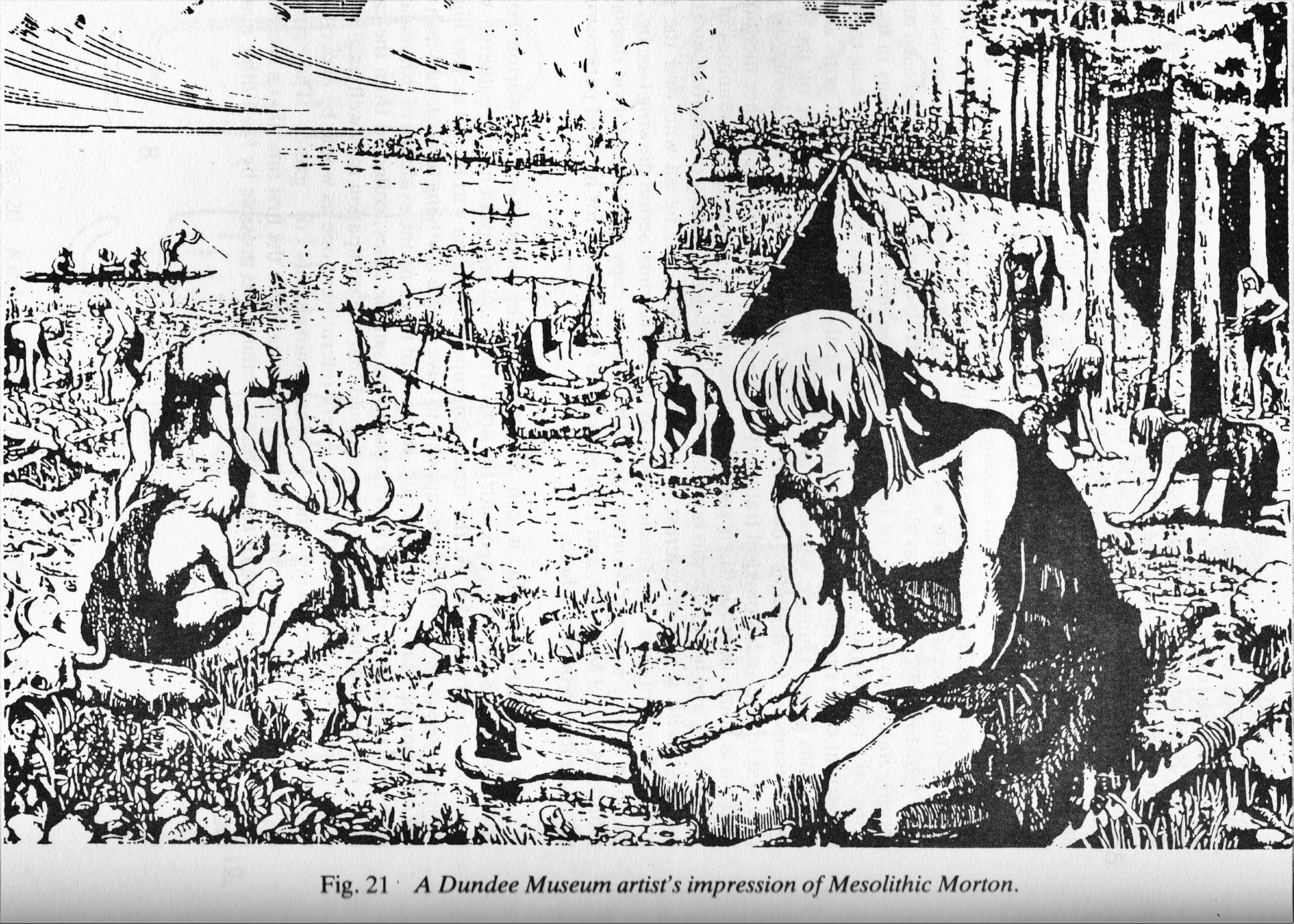 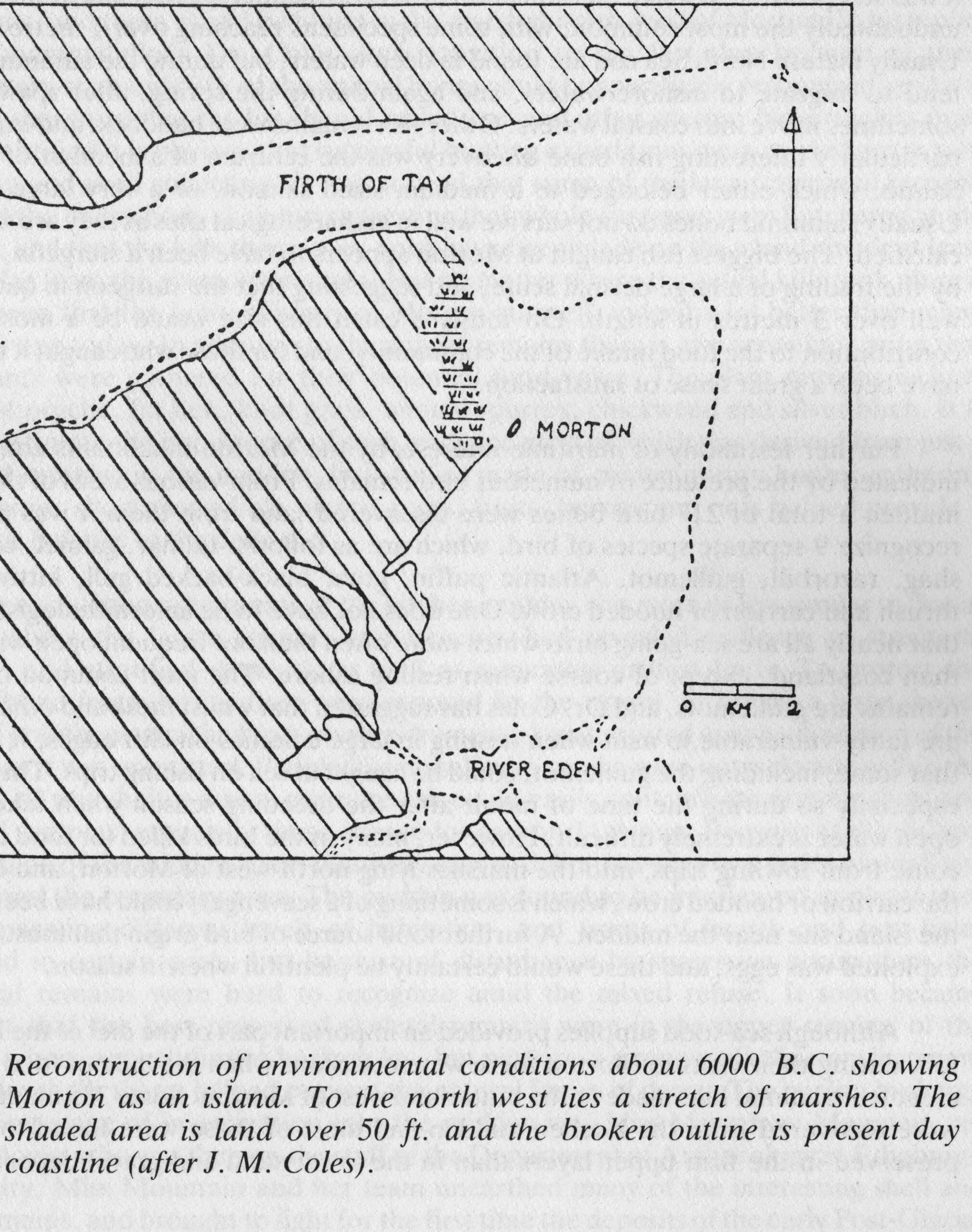 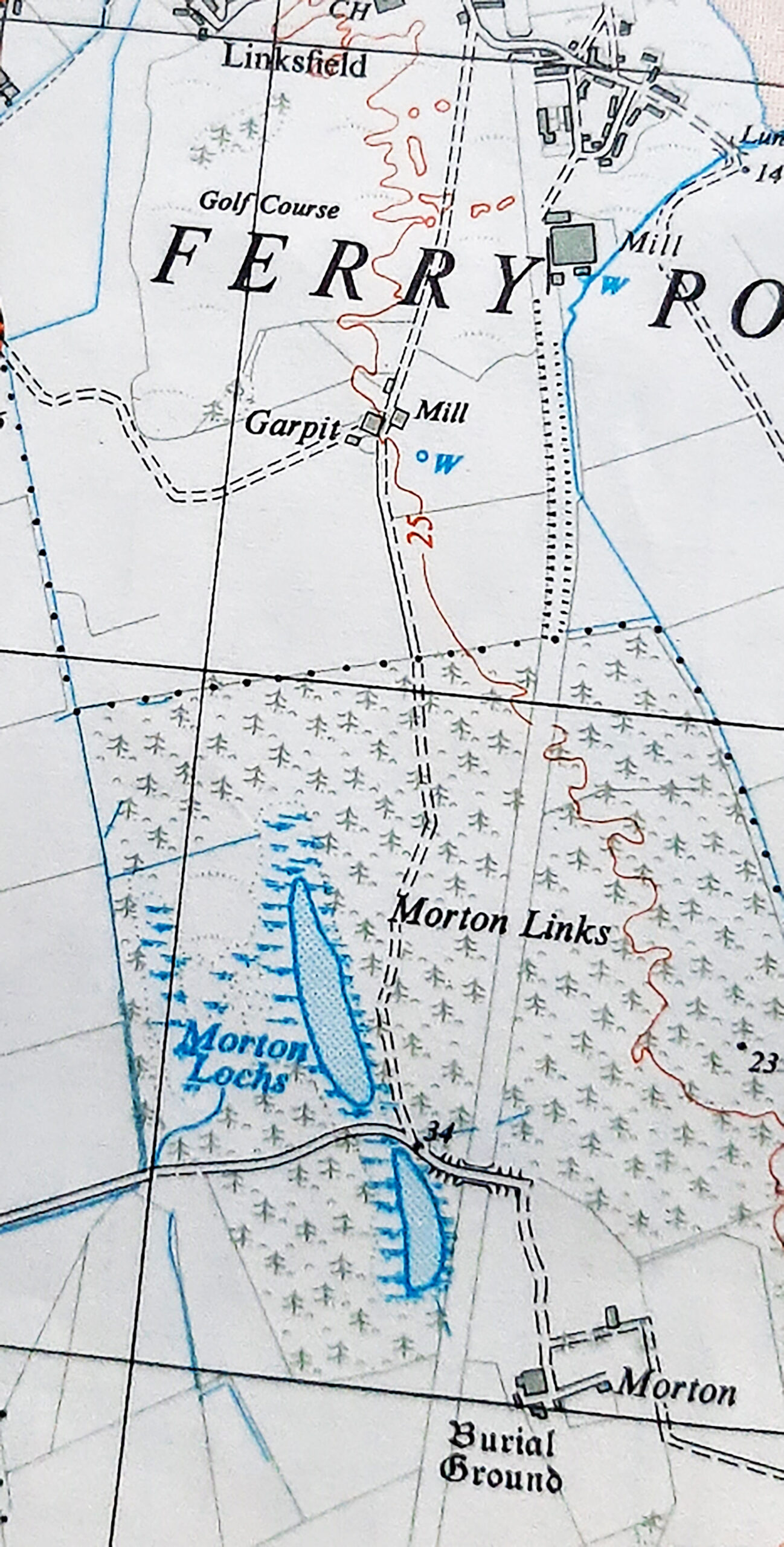 The lochs were Initially created privately in 1906 by farmer Peter Christie for rearing fish. He diverted the Ninewells Burn to what was low-lying  sandy moorland between the irregular low dune ridges parallel to the coast. The purchase of the 59 acres of land for the Nature Reserve from the Forestry Commission was completed in 1956. The Ninewells Burn was the water source for the Ferrie Mill at Garpit and remained an important supply of water to the steam engines of Scott & Fyfe factory of Tayport until well into the mid 20th century.

Grouse were introduced to the links in 1876 by Admiral Maitland Dougall of Scotscraig and the first chicks bred to maturity in 1878 by his gamekeeper John Fowlis. Upon the death of the Laird in 1890, the shootings of Scotscraig were let to Sir Walter Corbet, Bart. and then William Berry. Although the conservation of grouse was always under threat by crows, the project continued until at least 1918. The Forestry Commission acquired circa 4100 acres of Tentsmuir in 1922/24 and apart from some trees which were around the main entrance to Fetterdale and on the coastal path section on the Muirs towards Comerton, the planting generally dates from then on. 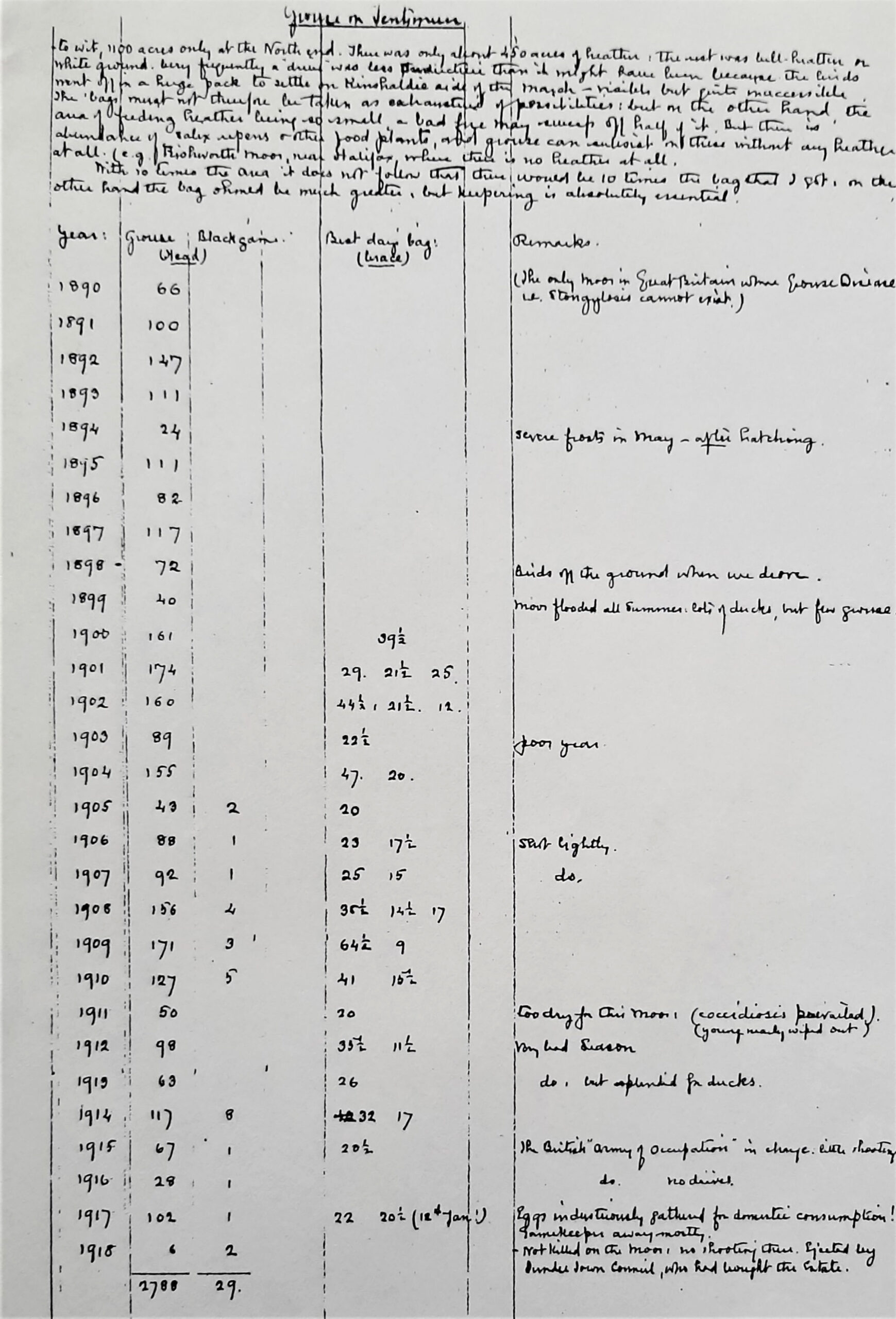 The club was founded in 1817 by members of the St. Andrews Society of Golfers, one of the members of which included William Dalgleish of Scotscraig, whose Garpit Links had included a horse racing course within which there were 6 golf holes (ref: 1824 advert). The Garpit links were ploughed up in 1834 by the tenant farmer and whilst the members tried to keep going by playing at Montrose and elsewhere, by the following year the club minutes stopped. The Club effectively went into abeyance, until the 5th May 1887, when a meeting was held in Templars Hall, Nelson Street, to resurrect the club. Today’s course to which the club returned in 1887, includes the site of this racecourse and by 1893 the course was 9 holes and extended to 18 holes in 1904.

The clubhouse built in 1896, following the amalgamation with Newport Golf Club in 1890, contains an exhibition of the club’s history including the 1818 and 1830 competition medals and the Asquith Lamp, presented by Lord Asquith. The part use by ladies in 1891 of the archery practice area of the course, was followed by permission to play over the links in 1896. The establishment of Scotscraig Ladies Golf Club in 1903 was followed by gradual relaxation of restrictions until equal membership with the men was finally granted in 1996. www.scottishgolfhistory.org/oldest-golf-clubs-societies /1817-scotscraig-golf-club 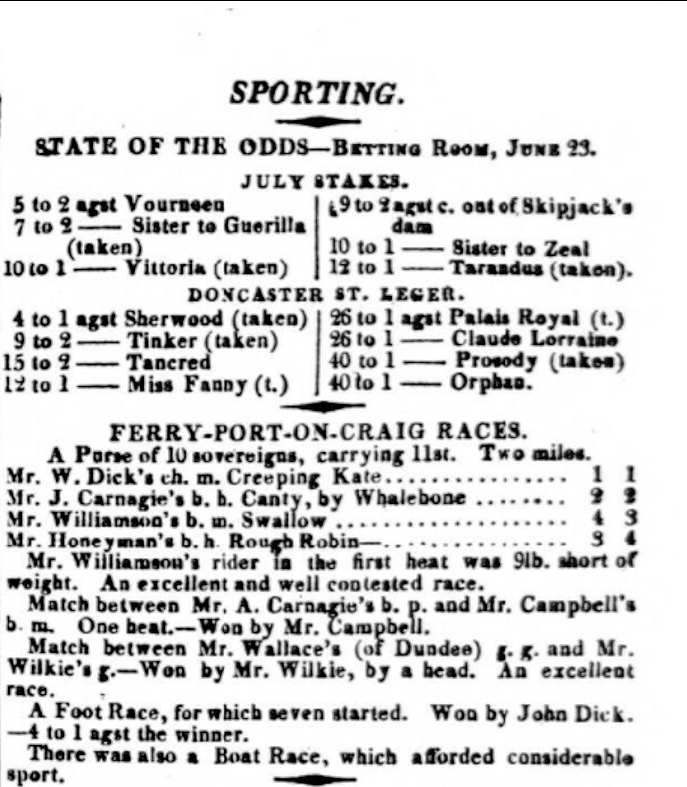 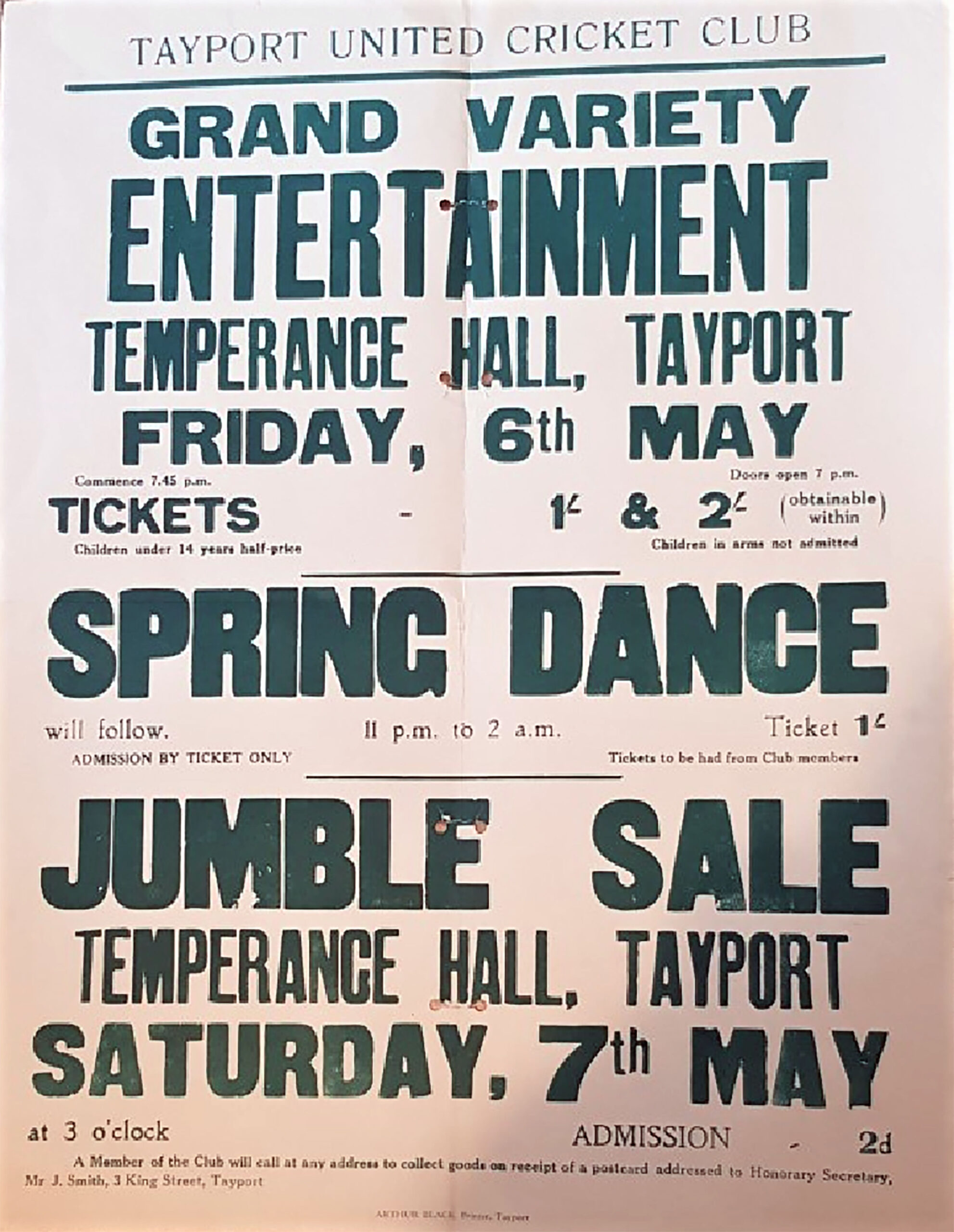 Tayport had a cricket club from at least 1863 when “Captain Dougall of Scotscraig presented a very handsome set of bats, balls and wickets which by their appearance must have been very expensive. The members subscription has been made small so as to ensure the entry of all classes….”  Tayport United C.C. continued to be a key part of the town’s social and sporting activities until the outbreak of WW II. Games were played in various locations including the site of the Larick Centre, alongside the location of the former ‘Mill Bridge’ which provided access over the railway to the Spinning Mill and Henderson’s Land. The Bridge was removed in the early 1970s.

Tayport born Robert Dalgleish Pryde (1870-1951) emigrated to the USA in 1892 following his apprenticeship as a golf club maker at Scotscraig. Pryde settled in Connecticut where he initially worked as a cabinet maker and was then commissioned to start work on designing and building a golf course when one of his clients rented land for a nine hole course in New Haven. He was described as a pioneer of golf and was responsible for the design of many fine courses including the Race Brook Country Club in Orange, Connecticut. For 25 years until stepping down in 1936, he was secretary, treasurer and club director.

In 1941 he received a gold key from the State Sportswriters’ Alliance for distinguished Services to Sport “Only a genius could have guided the tremendous growth of golf in Connecticut as Robert Pryde has done. Bob Pryde has been Mr Golf for the best part of half a century of the game’s development.”   The link with Connecticut Golf has been revived in recent years with exchange visits between the clubs. The First 200 Years by David Christie (2017) further outlines the development of the club. 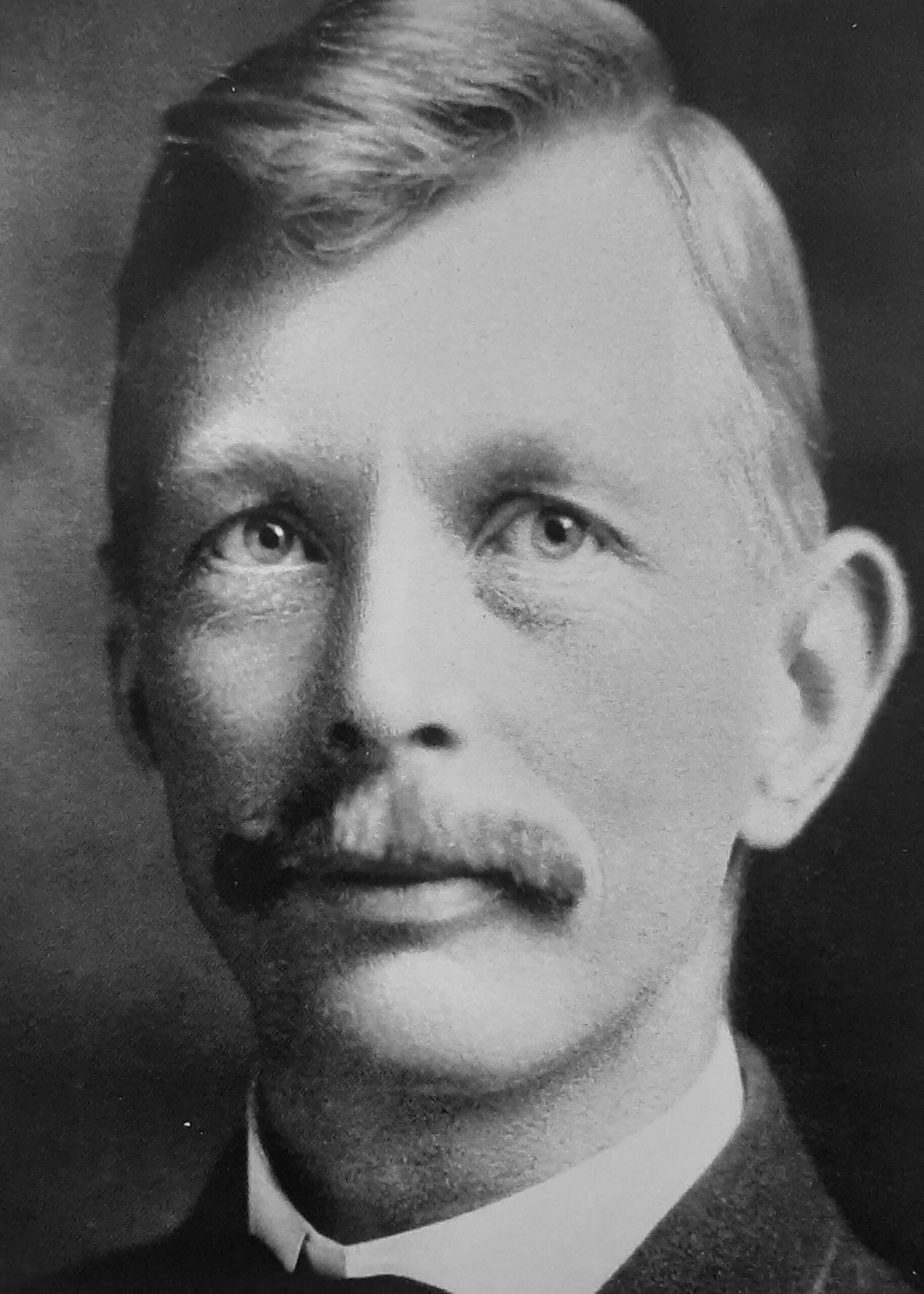