Wm. Dalgleish, Laird of Scotscraig, purchased the property of Thomas Gorrie, a Tavern Keeper, and in 1805 replaced the small pier as shown on the 1769 Hope Map, with the larger stone pier which was often referred to as the Ferry Pier or County Pier. It forms the west edge of the west basin, which is known locally as the Old Harbour. Located on the south edge of the basin is the former Boiling House and slip from the time of the salmon fishing industry which was converted into a residence in the 1970s. Prior to the construction of the Railway Harbour in 1851, there was also a larger shipping pier under the ownership of the Lairds, at that time the Stark Dougall family, where vessels landed with coal and other cargoes while grain, potatoes and other kinds of goods were shipped to London and other ports. 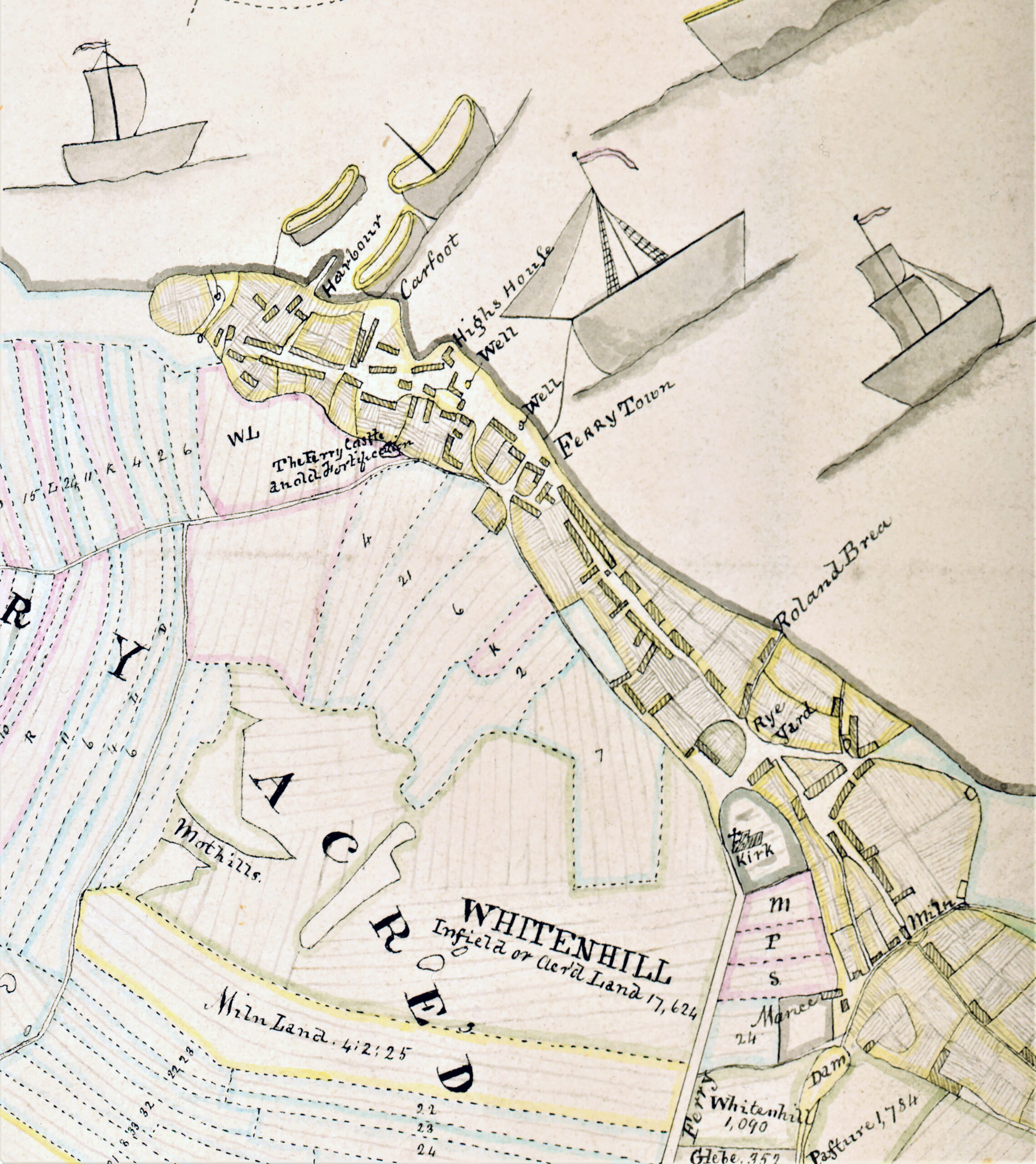 Boat building activities of the pre-railway period  were carried out by a Mr John Calman in a location which was cut off from access to the river when the yards were acquired by the Railway Company in 1846. Mr Calman subsequently moved to Dundee to carry on his business and a Mr. Moyes similarly relocated to Broughty. The type of early vessel built is illustrated by the press advert “ A BRIGANTINE for Sale at the Ferry-Port-on-Craig 4th April 1816. She had a 54ft. Keel, breadth of beam 20.1/2ft., depth of hold 10 ft. 5” and admeasures about 110 tons. Apply to Walter Keay shipbuilder FPoC 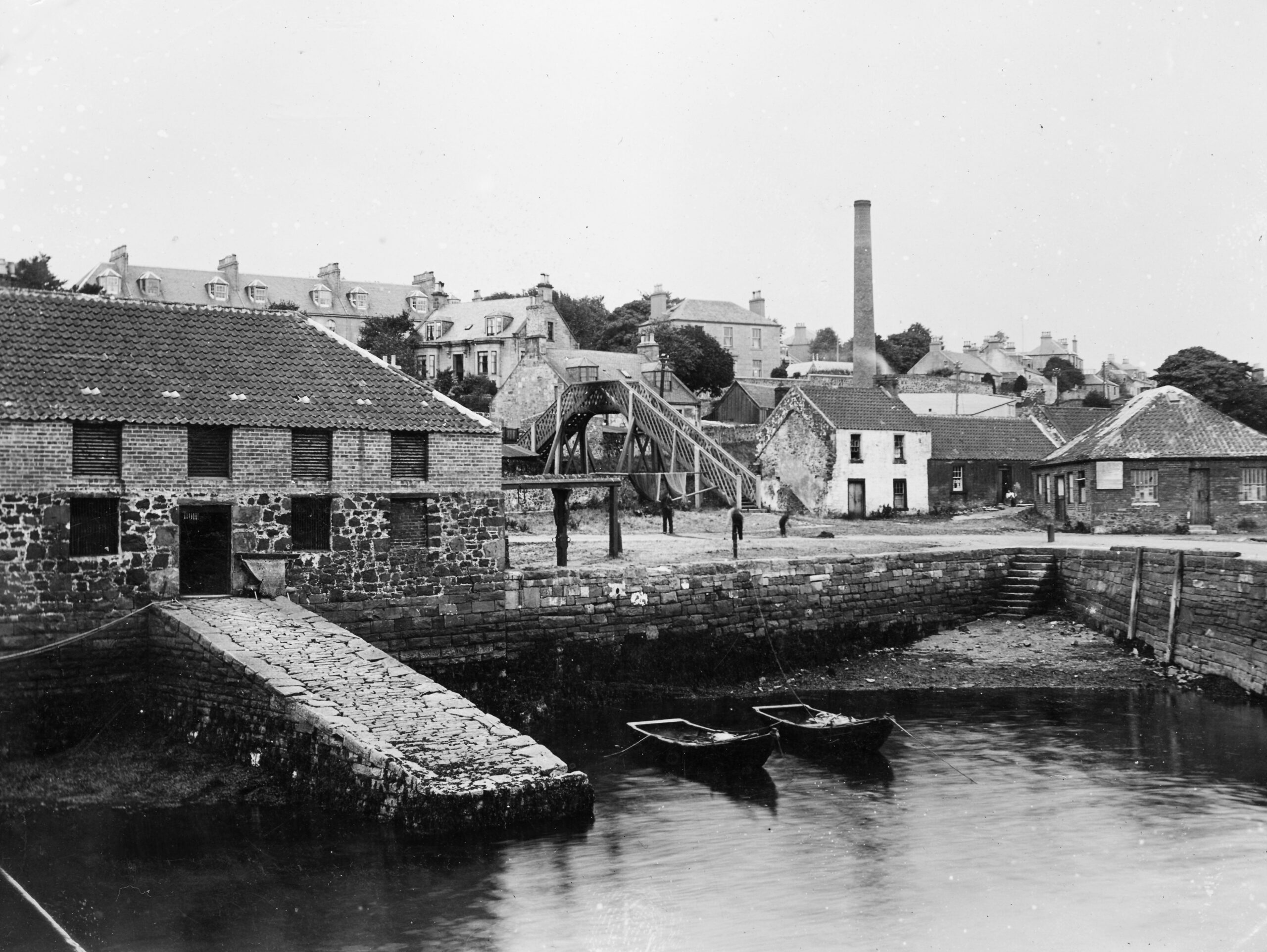 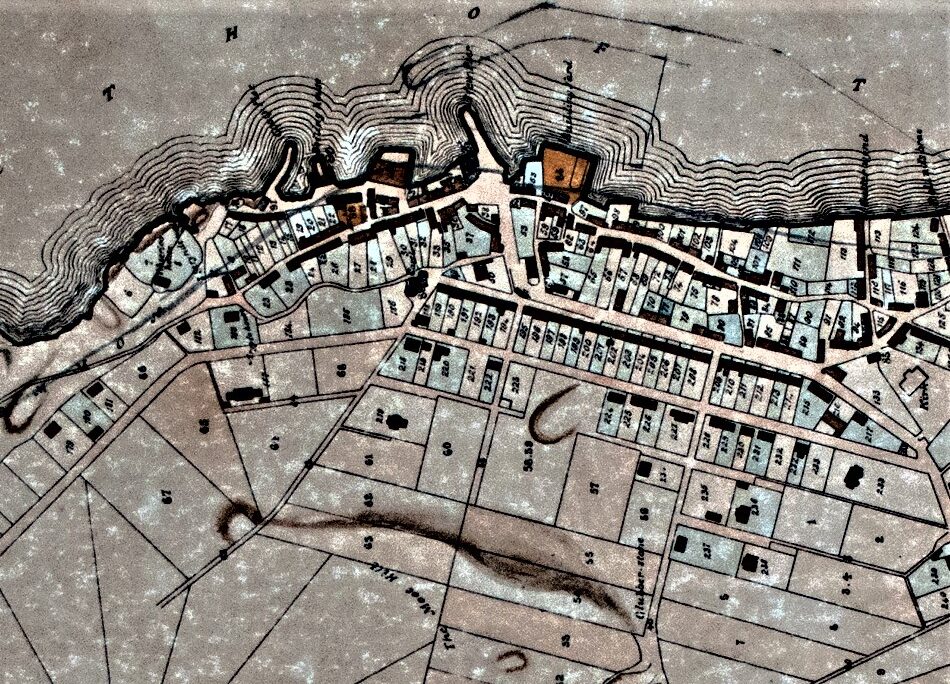 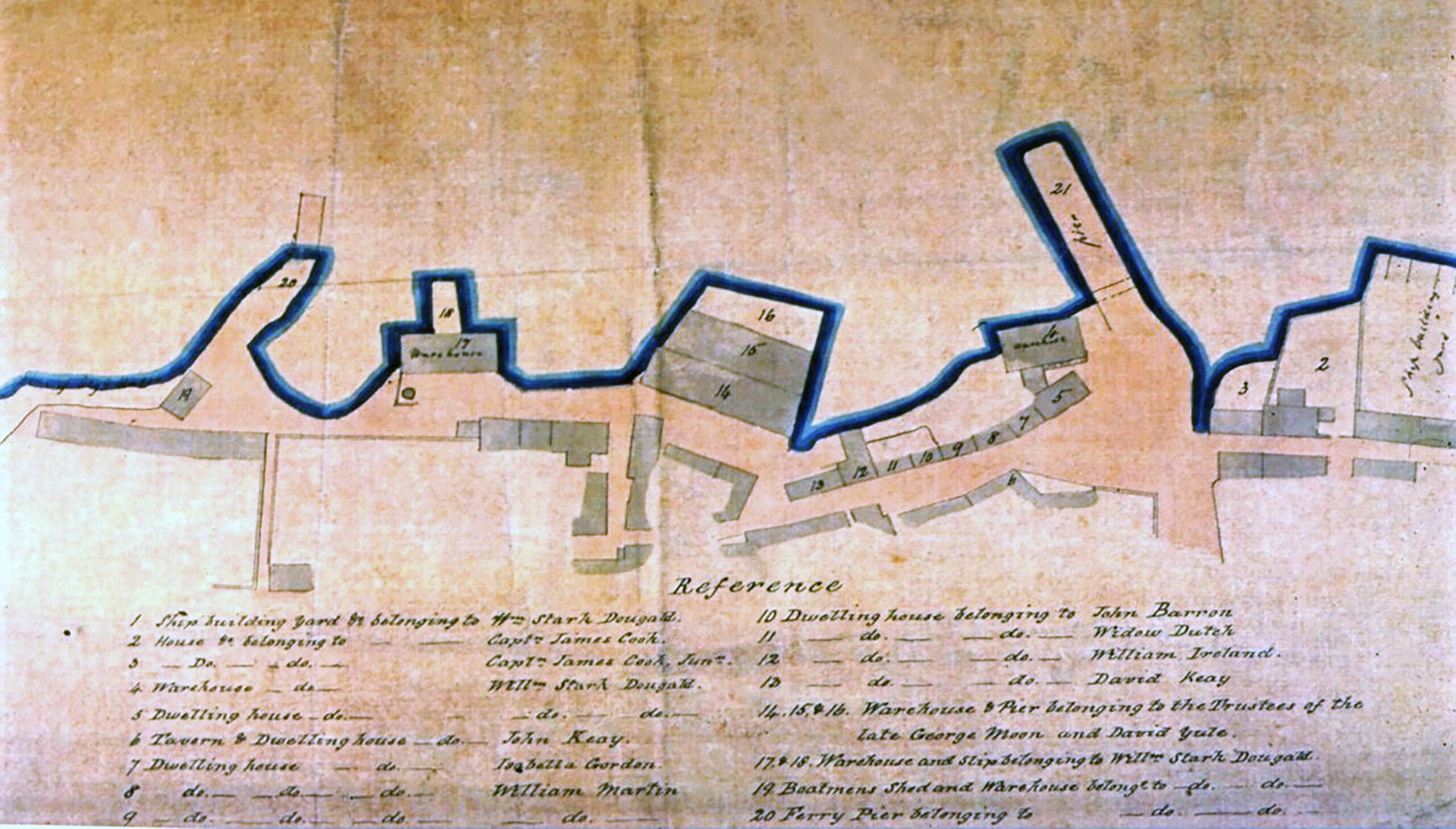 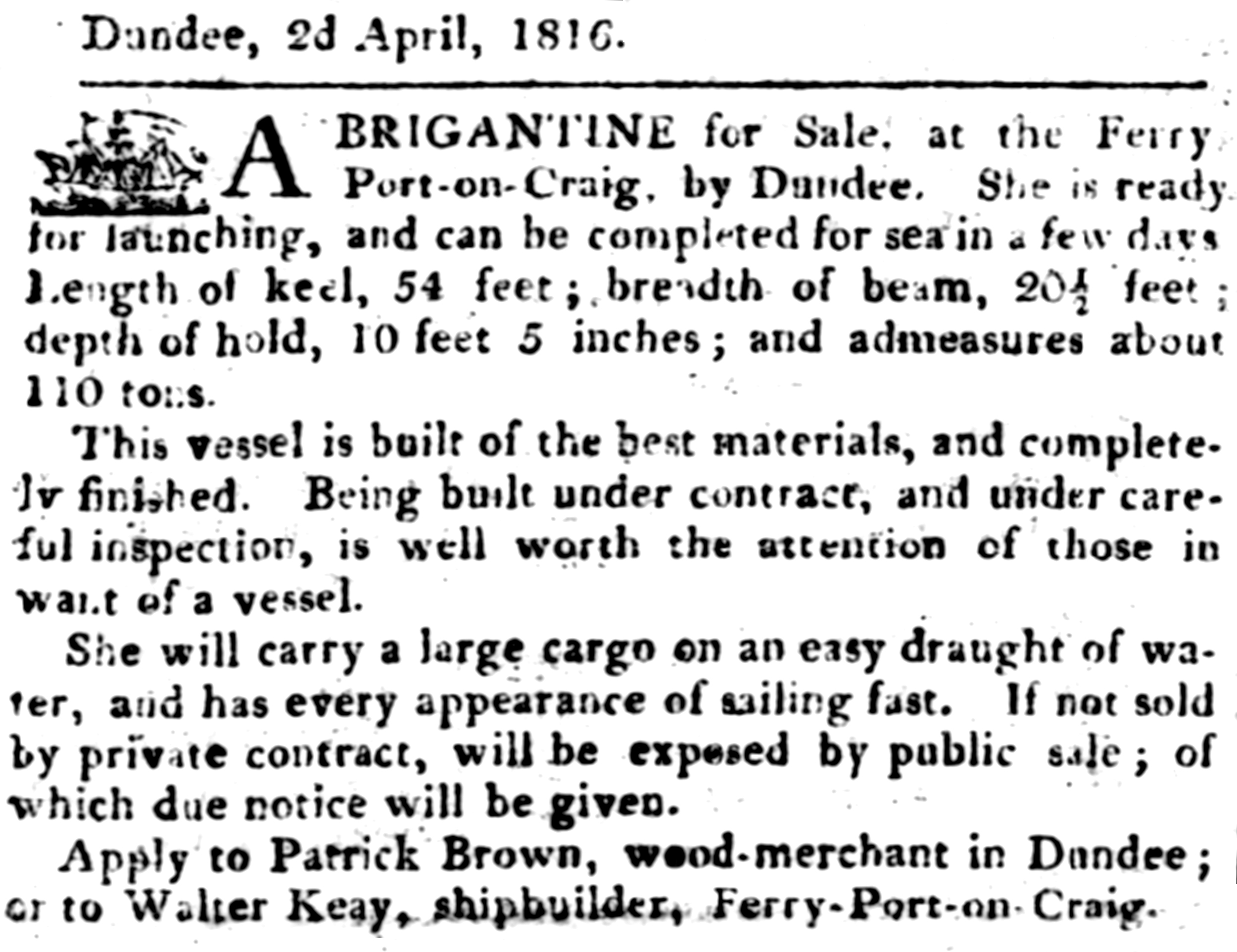 1816 sale advert of a brigantine 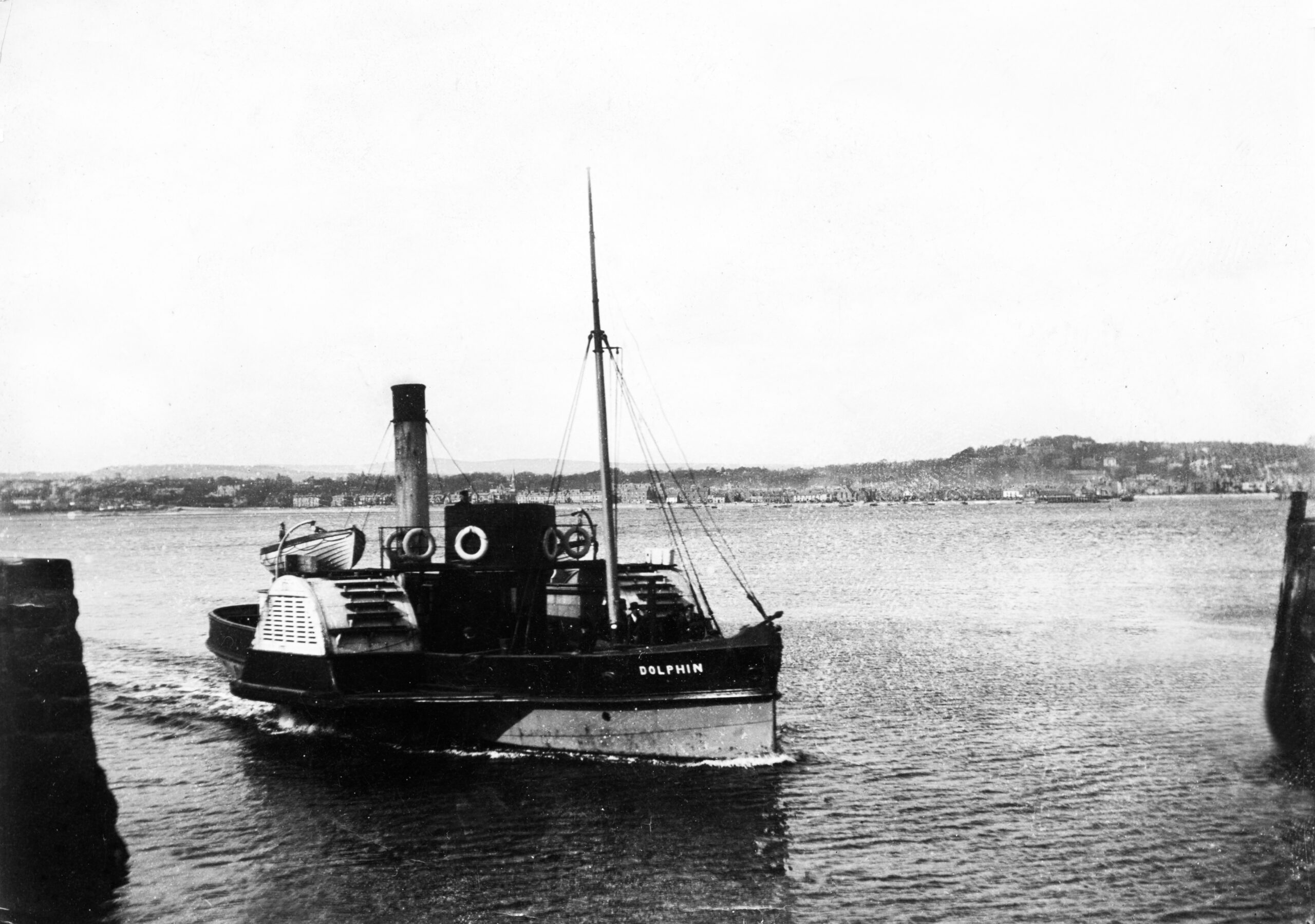 In 1865 proposals for construction of a new shipbuilding yard in the vicinity of the old west pier raised concerns in the neighbourhood regarding the impact of the proposals. The development work did go ahead and the Tay Ship /Patent Slip Company leased the yard to Duthie & Stuart of Aberdeen who built the ships Elizabeth Dougall, Stratheden, Downiemount and Strathnairn under the management of Mr William Thomson of Dundee and a joint shareholding which included some prominent Tayport citizens.

The 717 ton Strathnairn was the last and largest vessel built at Tayport and was launched on Monday 2nd October 1876 at the yard of the Tay Ship Company. Tragically she sank following a collision with a steam vessel in the hours of darkness off Normandy in February 1880. Despite advising the colliding vessel they were sound, she subsequently went down with all 18 hands. She had been en route from London to Melbourne carrying 1,000 tons of general cargo. The crew included Tayport men Captain White, his two sons and George Birrell.

The 526 Ton Elizabeth Dougall was lost off Cape Horn, after leaving the Tyne in November 1882 for Caldera, Chile. All 15 crew, mostly local to the Shields area, were lost. The adjacent yard of Messrs Dickie & Son was also active at that time and built an elegant 41ft. yacht for Col. Maitland Dougall as well as the 116ft, 260 ton 3 masted schooner the Roebuck for the Liverpool to Africa coast route.

The size of the shipyard area was considerably reduced by the construction of the Newport Railway in 1879, however a small boat yard still existed on the site until 1998, when a housing development was built on the yard area. 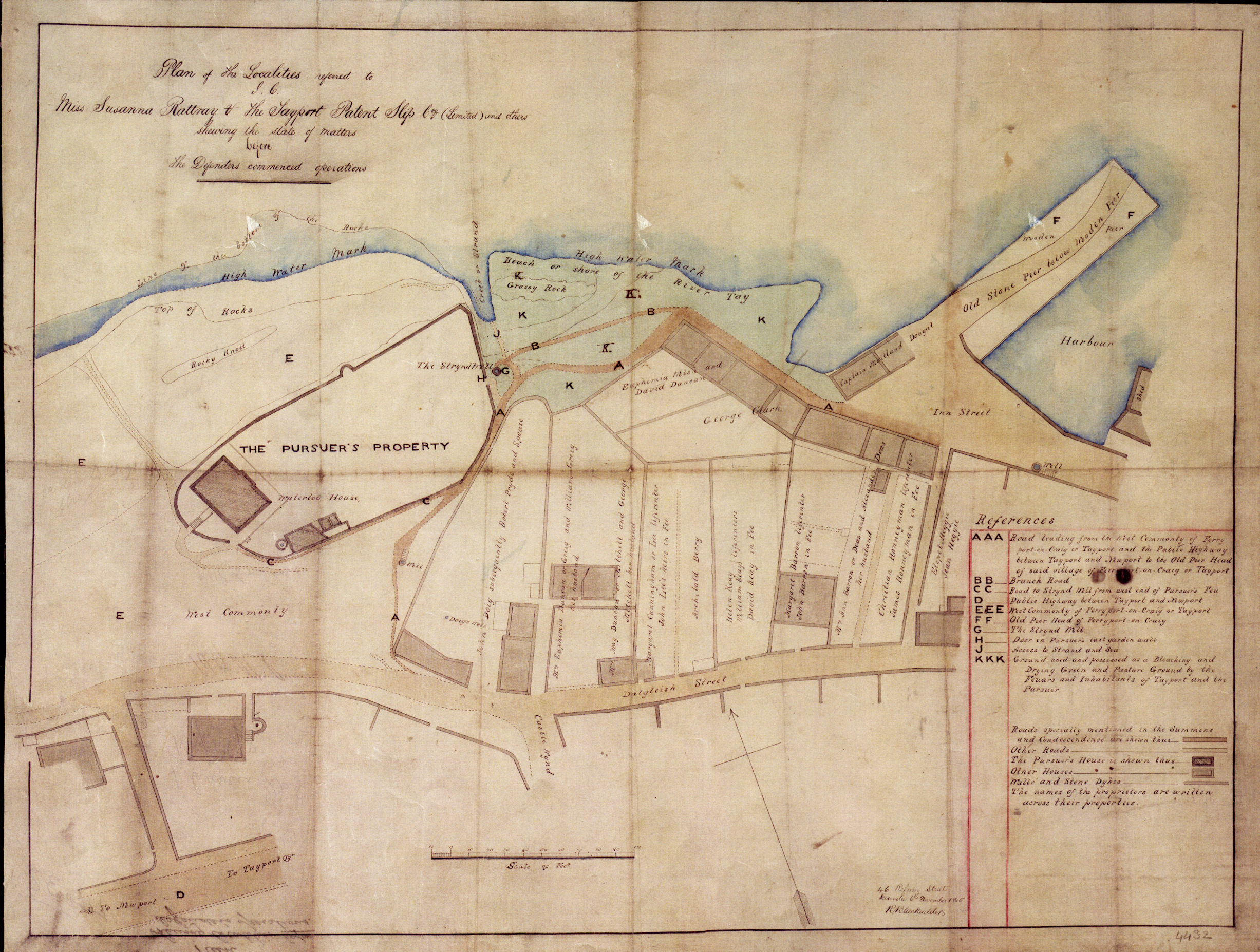 1865 plan prior to creation of large shipyard

The ship and boat building yards at Tayport belonging to the Tayport Slip Company and leased by a Mr James Mitchell, boat builder, “ were almost entirely destroyed by fire last night” as reported by the local press in February 1880. Damage was done to significant areas of the shed but a large fishing yawl under construction was saved. The lack of a of a fire engine and hose in the village required the men to bucket water from the adjacent boiler house tank, from nearby wells and from the sea. 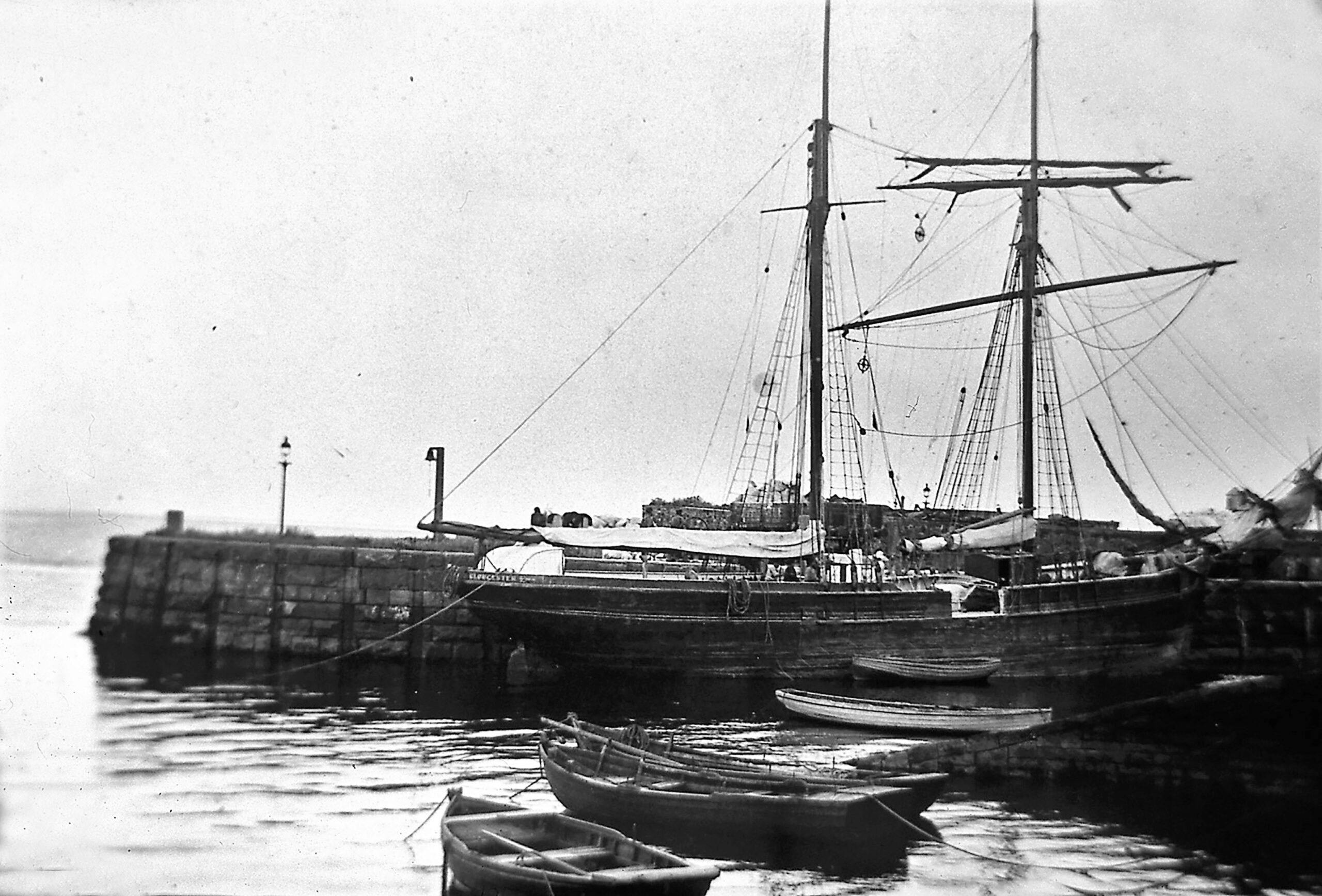 On April 9th 1885 the Dundee / Edinburgh train was nearly two hours late, as the low tide and sand bank prevented the Auld Reekie from entering the harbour, requiring the large number of passengers to be transferred by two trips of the steamer James Cox. This was a period of increased passenger numbers before completion of the replacement Tay rail bridge in June 1887. Silting of the harbour has been a significant issue for the operation of the facility since its construction by the railway company. A lawsuit in Dundee Sheriff Court March 1933, saw  Methil Ship owner Matthew Taylor’s case against London & North Eastern Railway, which alleged silt in the entrance channel had held up their vessel the S.S. Aberhill in 1927, found not proven in relation to liability. The movement of the sand in the entrance channel, reflects the powerful nature of the River Tay which as the longest river in Scotland, has the largest measured discharge in the UK. The Old Bell visible on early photos of the Railway Harbour is still in position on the square head. https://pastmap.org.uk/ 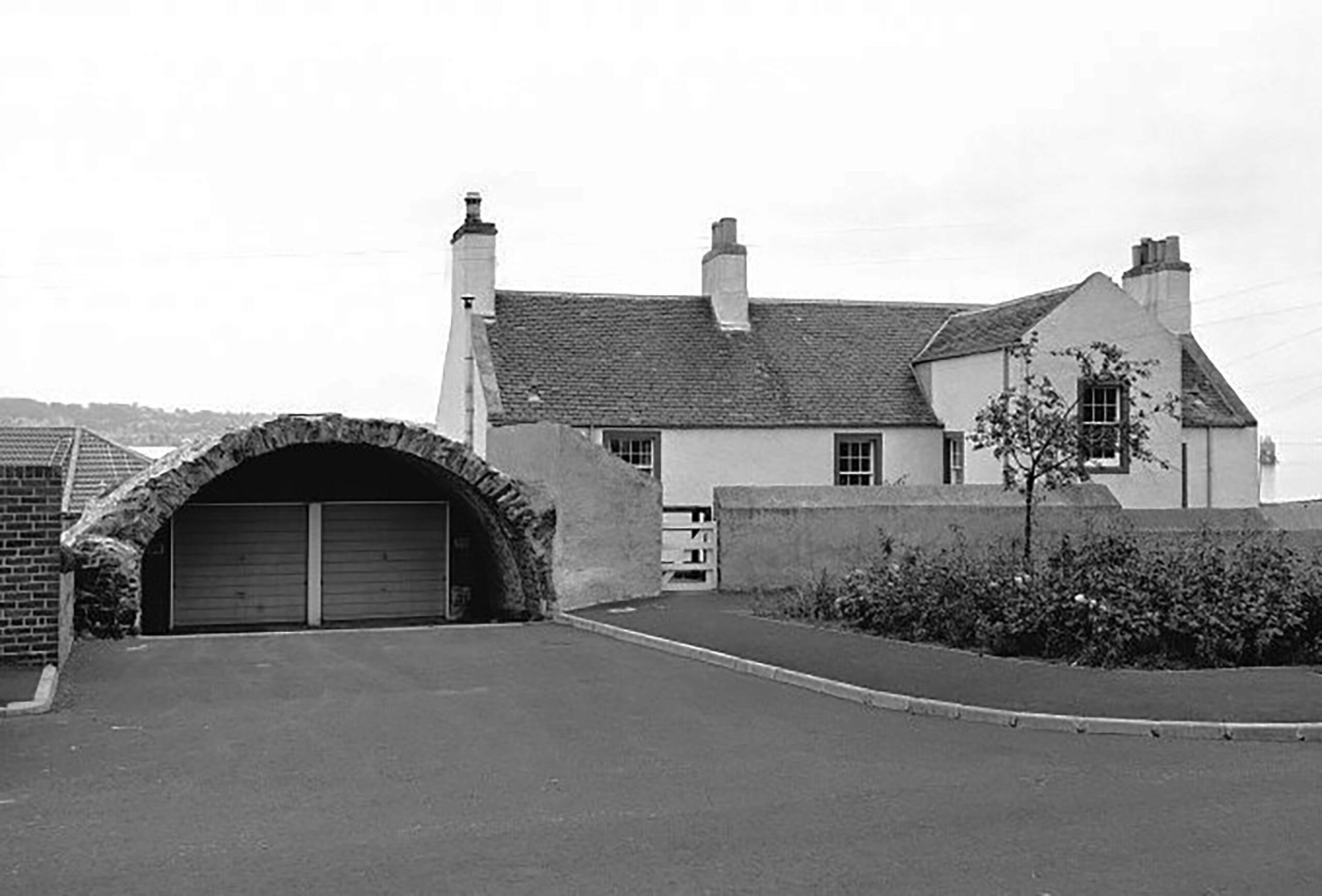 During the period of great physical change in the town following removal of the railway, Tayport Preservation & Development Society, in the 1960s and 1970s, provided guidance to the local planners and the council on planning & development matters. By commissioning the renovation of the properties in 1971, the Society was responsible for the preservation of the historic former Scotscraig Inn and Ice house. In earlier times the Scotscraig Inn had been the focal point of many social gatherings as reported in the local press at the time  “The Scotscraig Curling Club held their annual dinner in Scotscraig Hotel on Friday 11/2/1884.”  In 1725 the Inn or Tavern was a posting establishment belonging to a Daniel Sharp, when advertised for sale with its extensive  range of enclosed buildings, which included 3 stables sufficient for 30-36 horses. The Freemasons Arms  in Tay Street was also a posting establishment in the late 1800s. 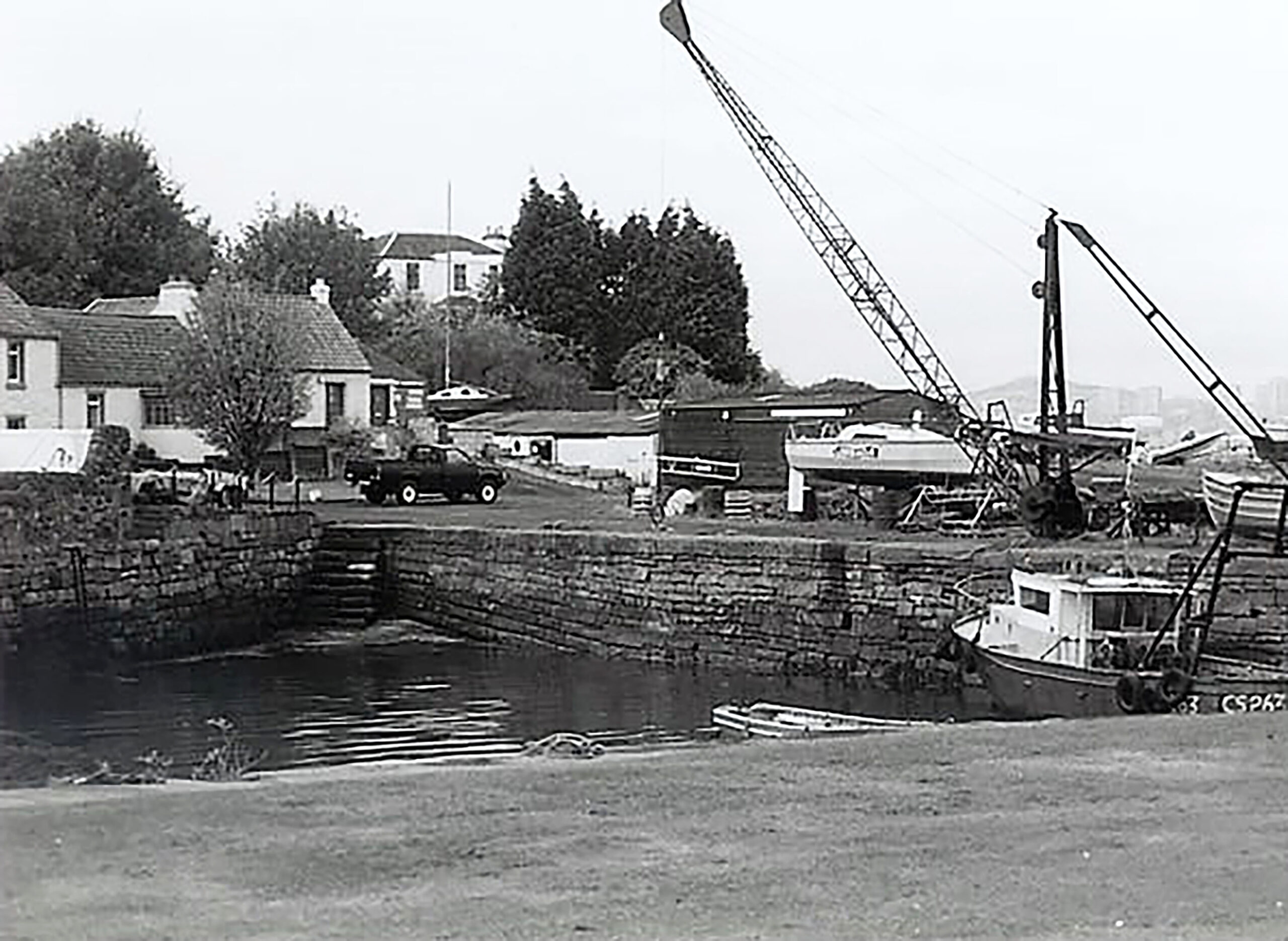