The Hope Map of 1769 indicates the Mill Dam was once the end point of the Ferry Town stretching from Dalgleish Street along past the Kirk to Mill Lane, with only a few houses shown continuing along the Cowgate leading towards the grazing on the East Common. Until around 1890, what is now Maitland Street was only a lane known as the Watery Bauk, whilst the Dam also continued over Ogilvy Street necessitating the use of a footbridge prior to the formation of the top half of the street. The outlet from the Dam was taken down Mill Lane to help power the sawmill, established in Mill Place by a Mr David Spence in 1850. Prior to the installation of the town water supply in 1890, this water source was also utilised by the Donaldson family, who operated a large sawmill and timber import and supply business at Greenside Place from 1860 until 1990, when the business was relocated to their Leven mill. The Parochial Directory of 1861 records one of the two sawmills in the town was still driven by water power (Mr Welch) with the other driven by steam (J Donaldson). 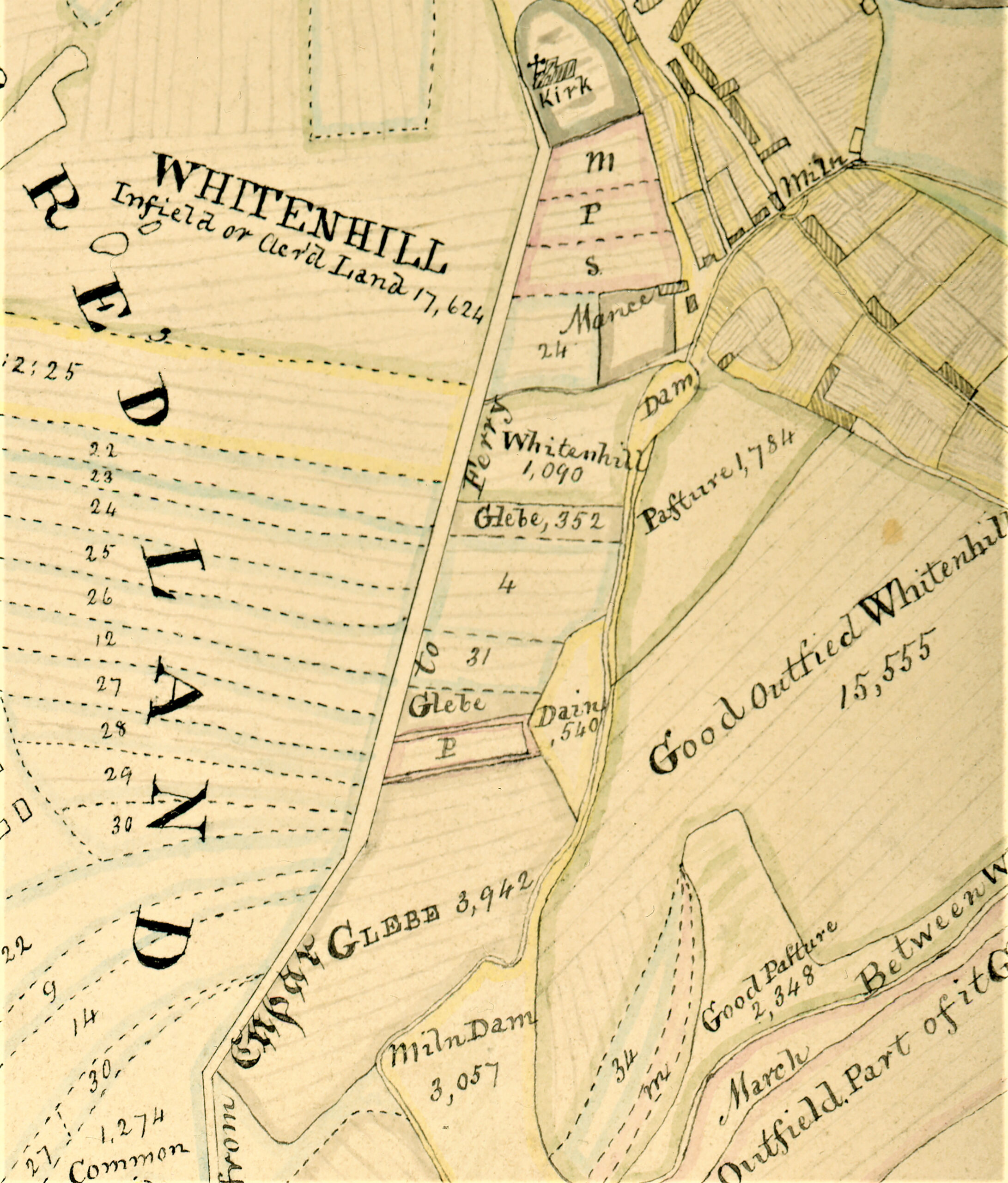 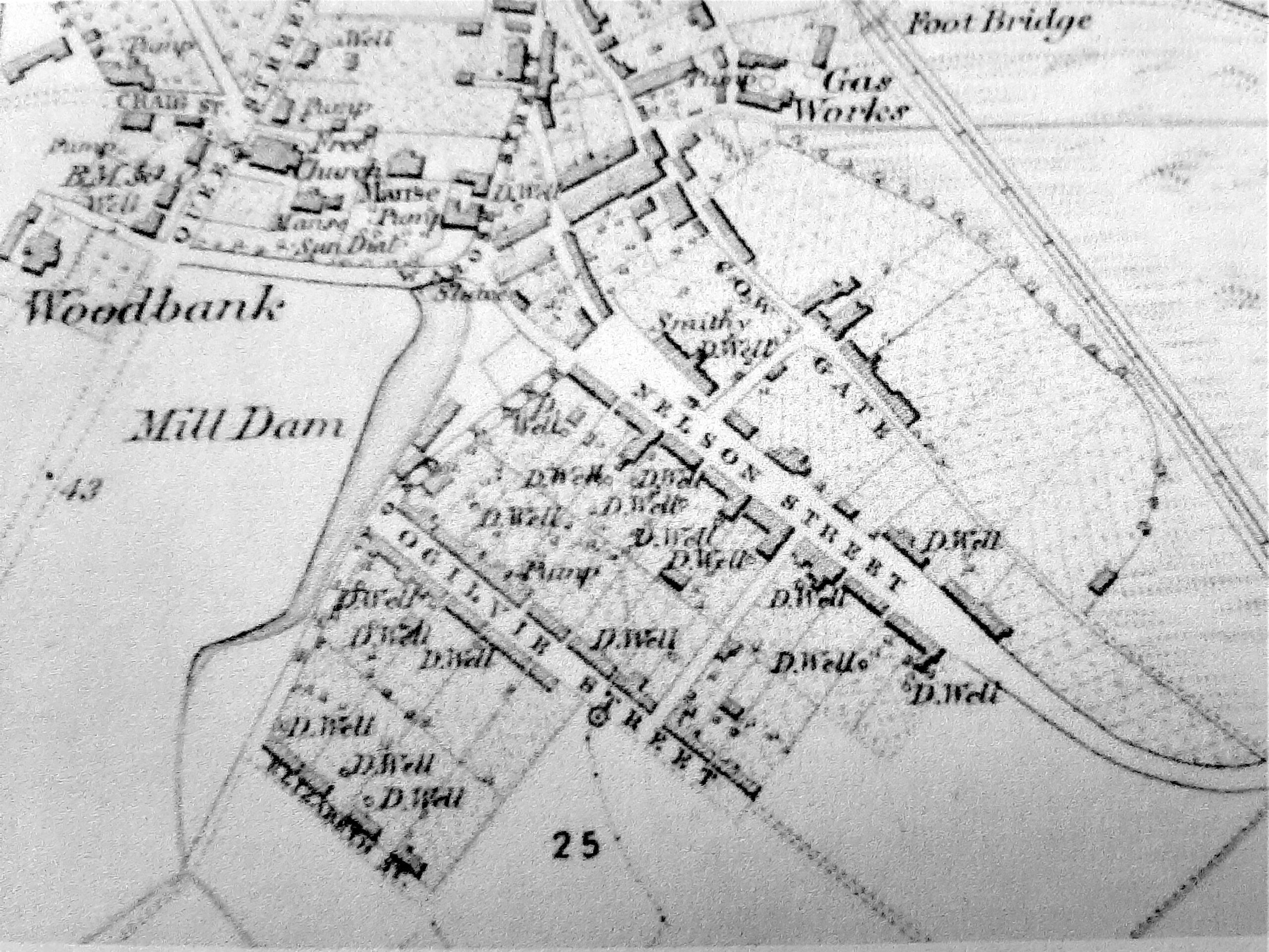 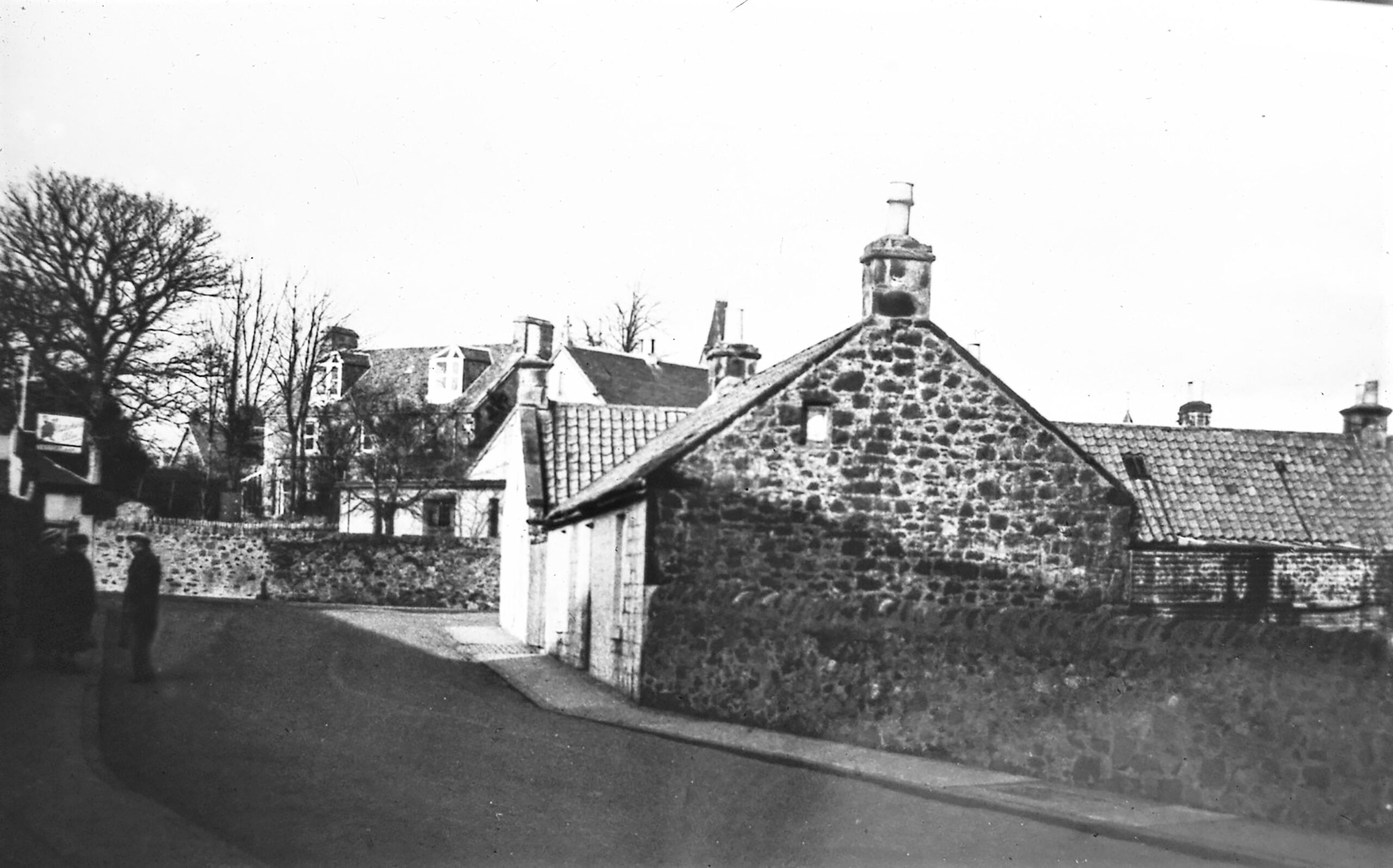 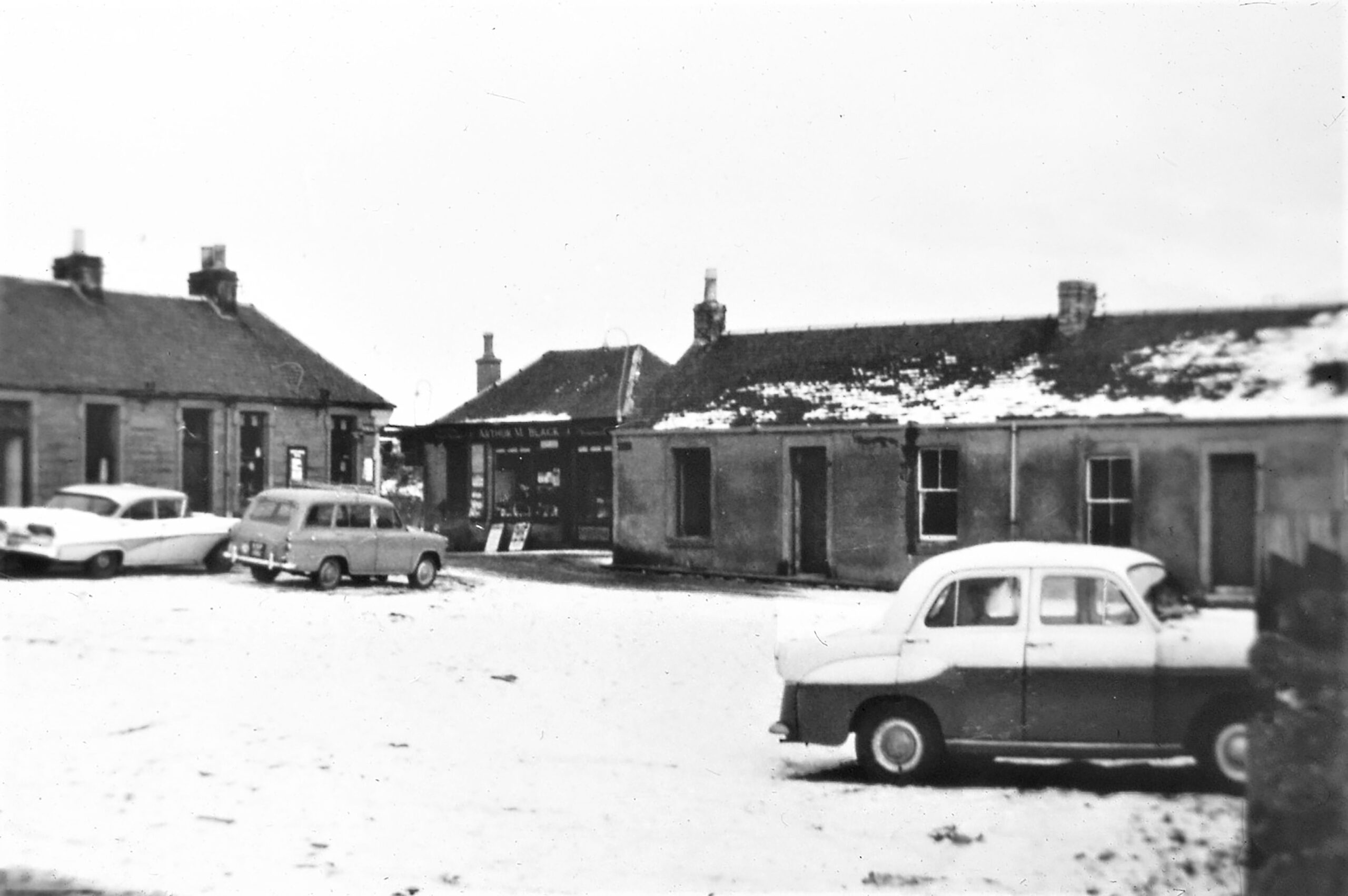 The former manse of the Auld Kirk, located in Maitland Street, was built in 1796 to replace the original manse, whilst the area on which the former Church Hall (later the Instrumental Band Hall) stands, was the site occupied by the old Parish Glebe farm steading. It was from this steading that they worked the Glebe Lands, which stretched out past the edge of the Cross Greens, to the fields designated the ‘Ministers Foggage’  as shown on the Scotscraig 1831 Map.

By 1793 the population of the Parish had increased by 254 from the 1755 return, to a total of 875, of whom 704 lived in the village.  The number of females over the age of 7 was listed at 390 giving them a majority of 80 over the men. It lists 35 sailors (mostly engaged on the Dundee Merchantmen) and 76 engaged in weaving. The Scotscraig 1831 Map also highlights the continued drift into the town from the country, owing to a combination of the farmers keeping smaller coteries and the increase in cottage based manufacturing in the period before the arrival of the railway. The 1831 census recorded the village population as 1538, whilst the country area was 142. The 1861 Parochial Directory describes the more modern “ Leys suburb chiefly inhabited by weavers and their families and is divided into three streets, Nelson Street, Ogilvy Street and Elizabeth Street, with occasional  cross lanes.” This expansion of the town was a precursor to the introduction of the larger power spinning factories and mills during the 1860s, along with their supporting engineering works and foundries. 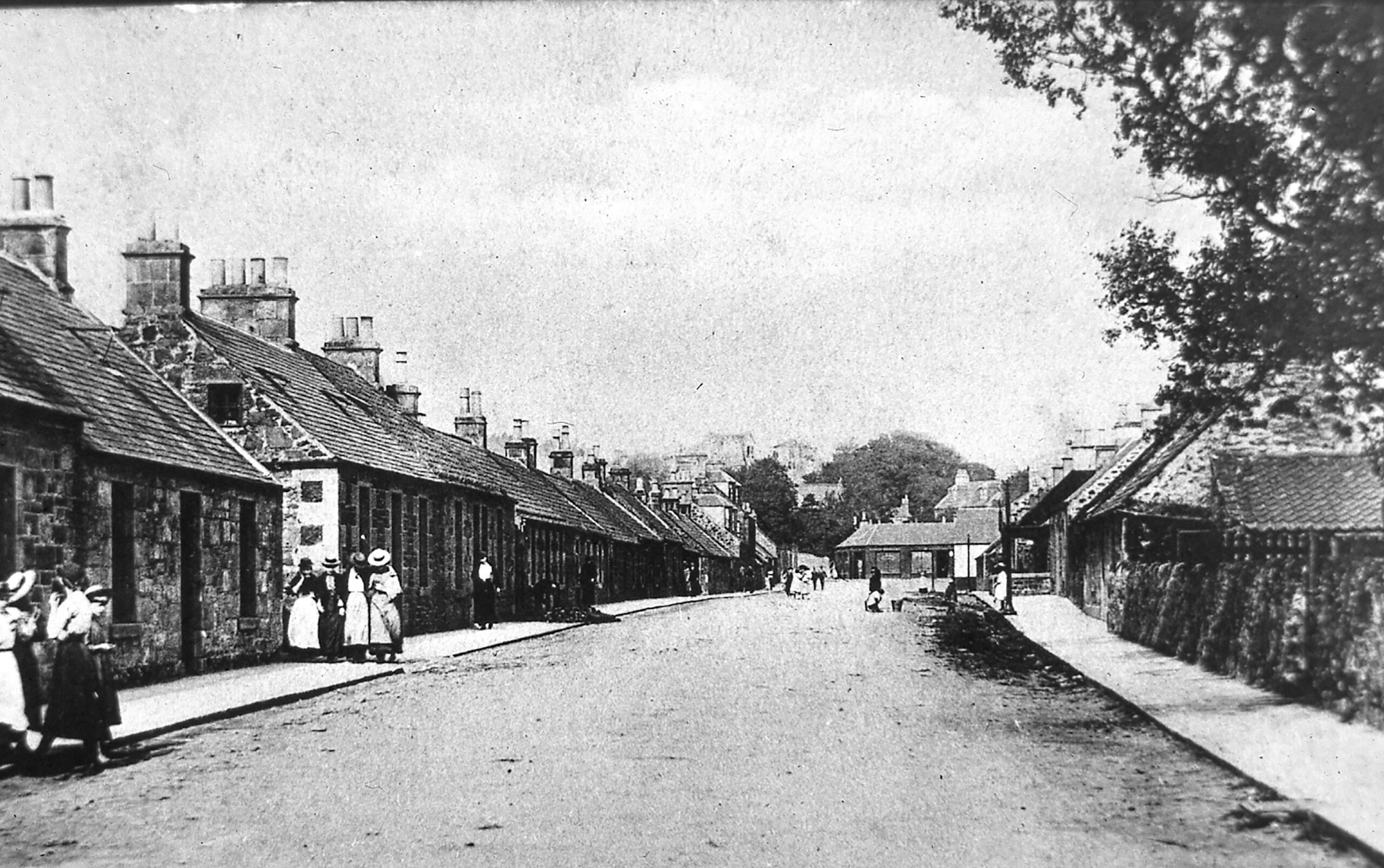 Early 1900s looking up from 51 Nelson Street towards Nicoll Square 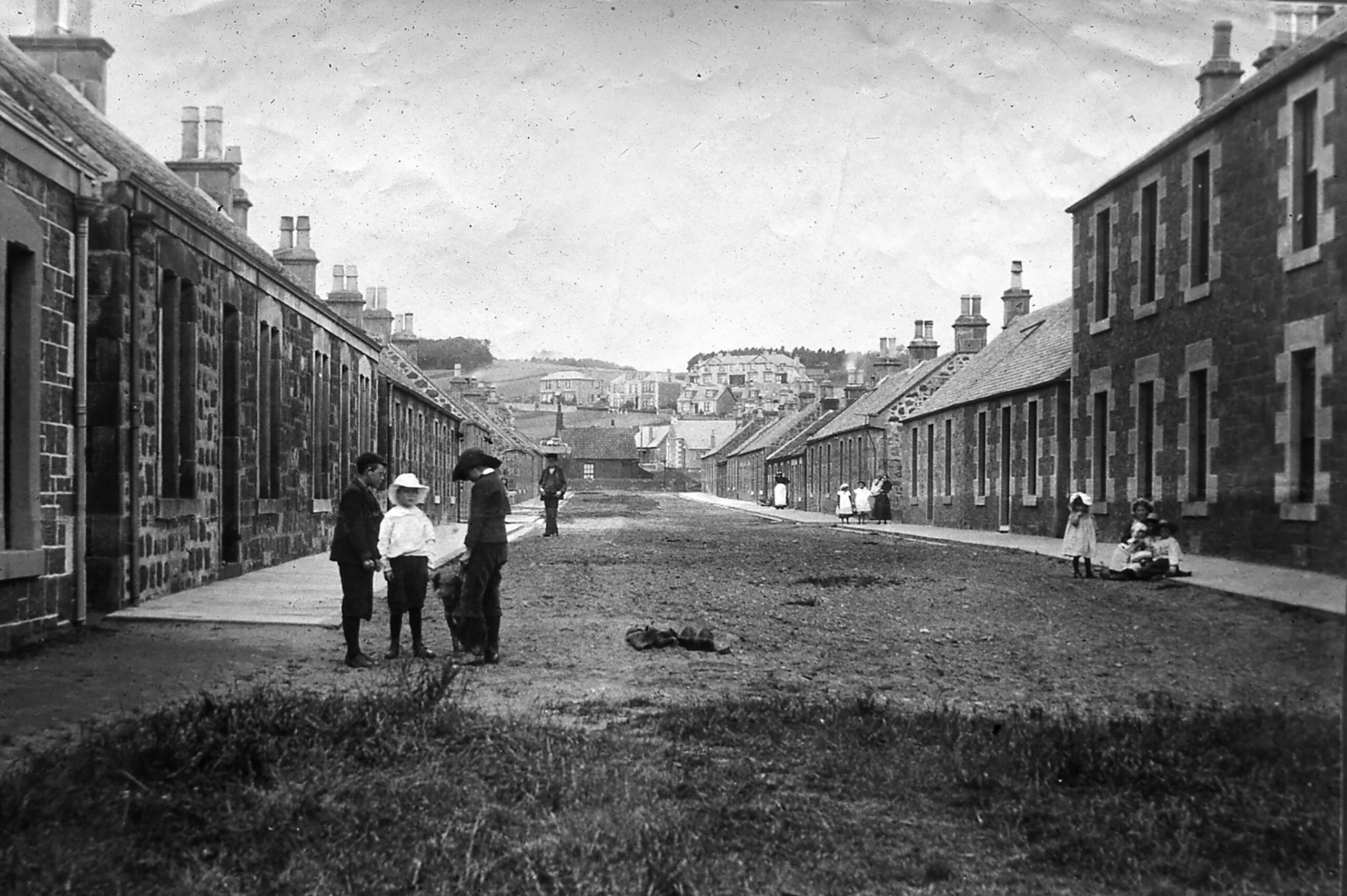 The café played a pivotal social role in the community for three decades until the late 1960s both with his fish restaurant and later the adjacent café managed by his son Angus. Angus was later recorded in the Guinness Book of Records for going the longest period without solids during the period of his special diet. His mobile ice-cream trike and summer ice cream hut on the Esplanade, also kept many local children and picnickers happy. The prime location of the property at the corner of Nicoll Square/Pond Lane framed the wider Nelson Street entry into the Leys suburb. 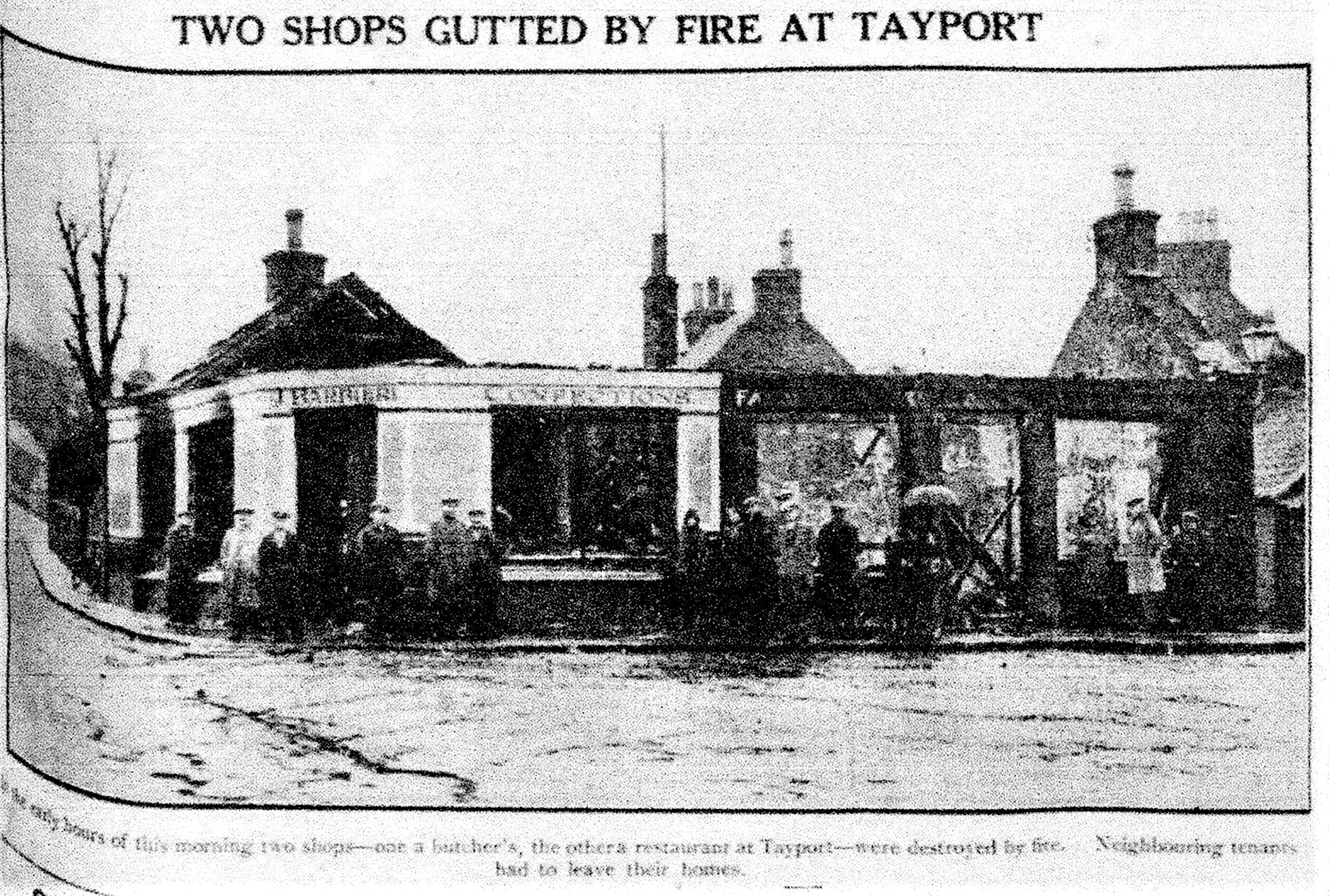 The town’s new fire station was officially opened on 19th April 1975 by Provost James Pow, JP. It was previously located at the corner of Dougall Street and Reform Street. A retained brigade has  been an integral part of the community since the establishment of a fire fighting team in 1891 following the provision of a town water supply in 1890. The town has seen a number of substantial fires throughout the years, including a major ship fire at the harbour in 1901 when a fire broke out in the hold of the steamer SS Cervin with a cargo of esparto grass from Oran, North Africa. The fire, which continued for over 24hrs, was initially tackled by the Tayport brigade under its Captain, local plumber Walter Pillans, whose ingenuity in tackling the conflagration was subsequently recognised. He enlisted support from the donkey engines of the trawler Marion which was in for coal and the  Dundee tug Renown which had called to take a vessel to Dundee. The Dundee Brigade with their enhanced equipment, had to wait until the following day to come over the river on the Newport Ferry. Other major fires included the fire of 1932 which gutted the premises of Joe Barbieri’s fish restaurant and the adjacent McCallum the butcher that stood in this very location, the cinema fire in 1946 when the water was pumped from the Mill Dam and the Scotscraig Works factory fire in 1956, all illustrate the unit’s essential role within the community. 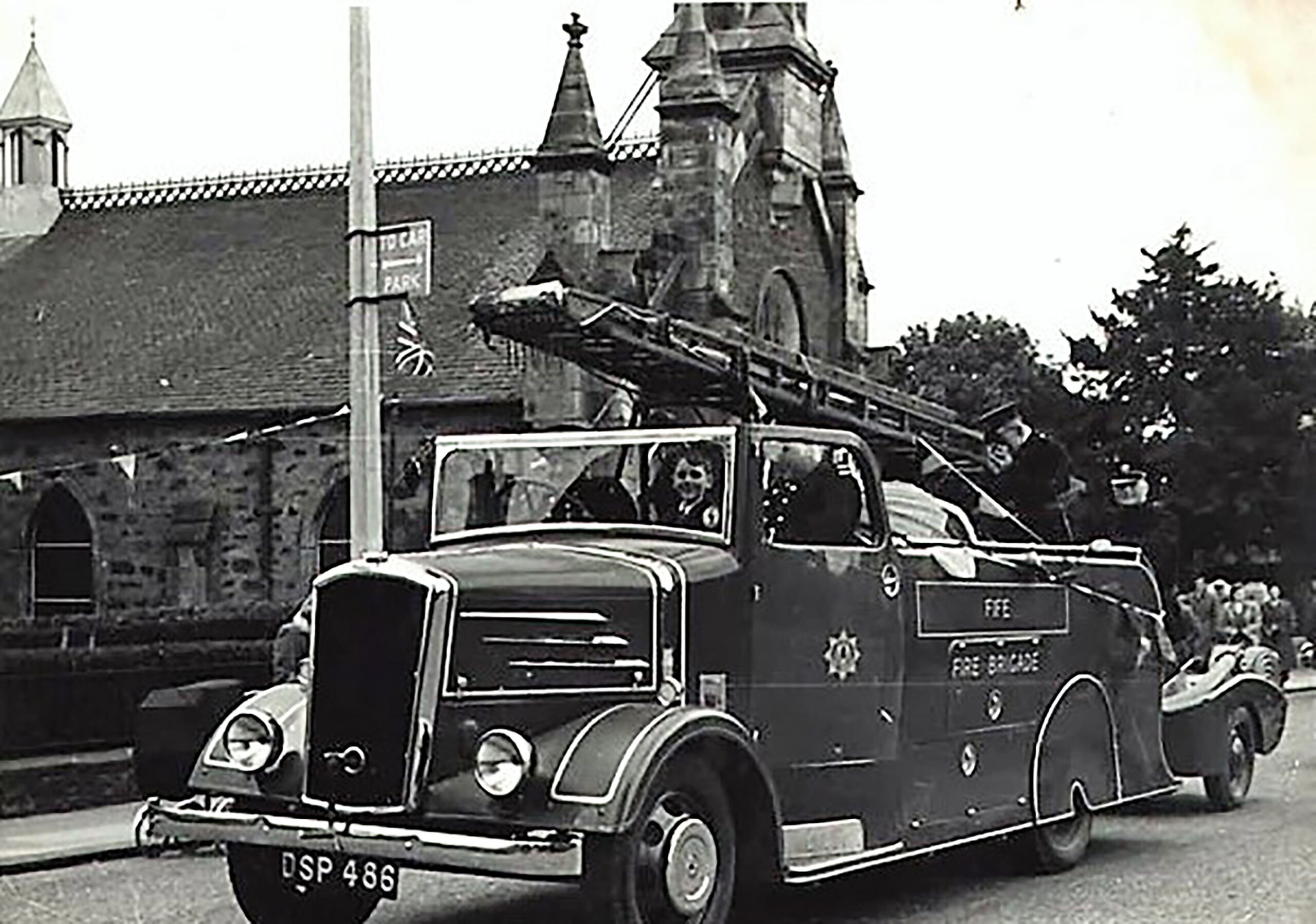 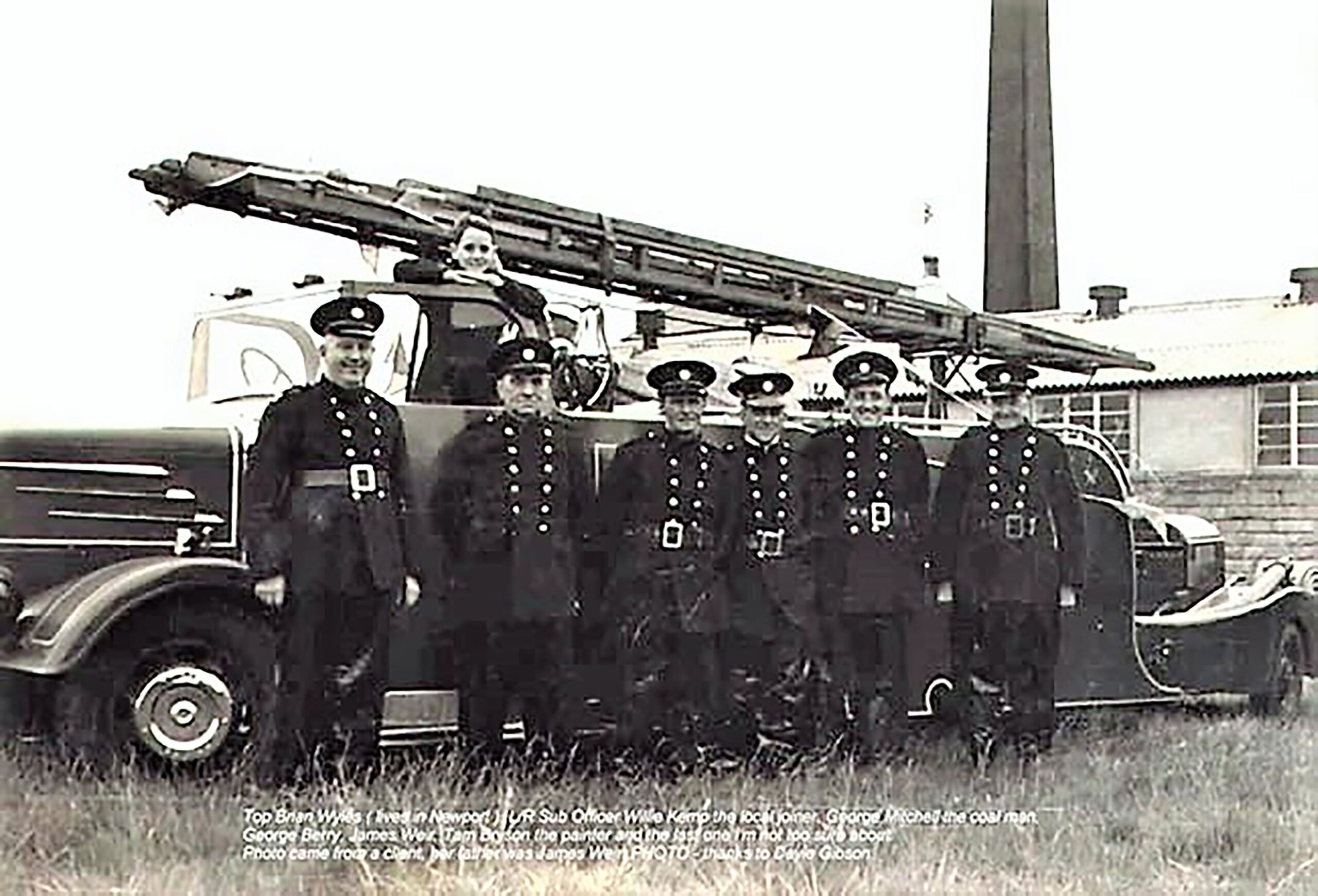 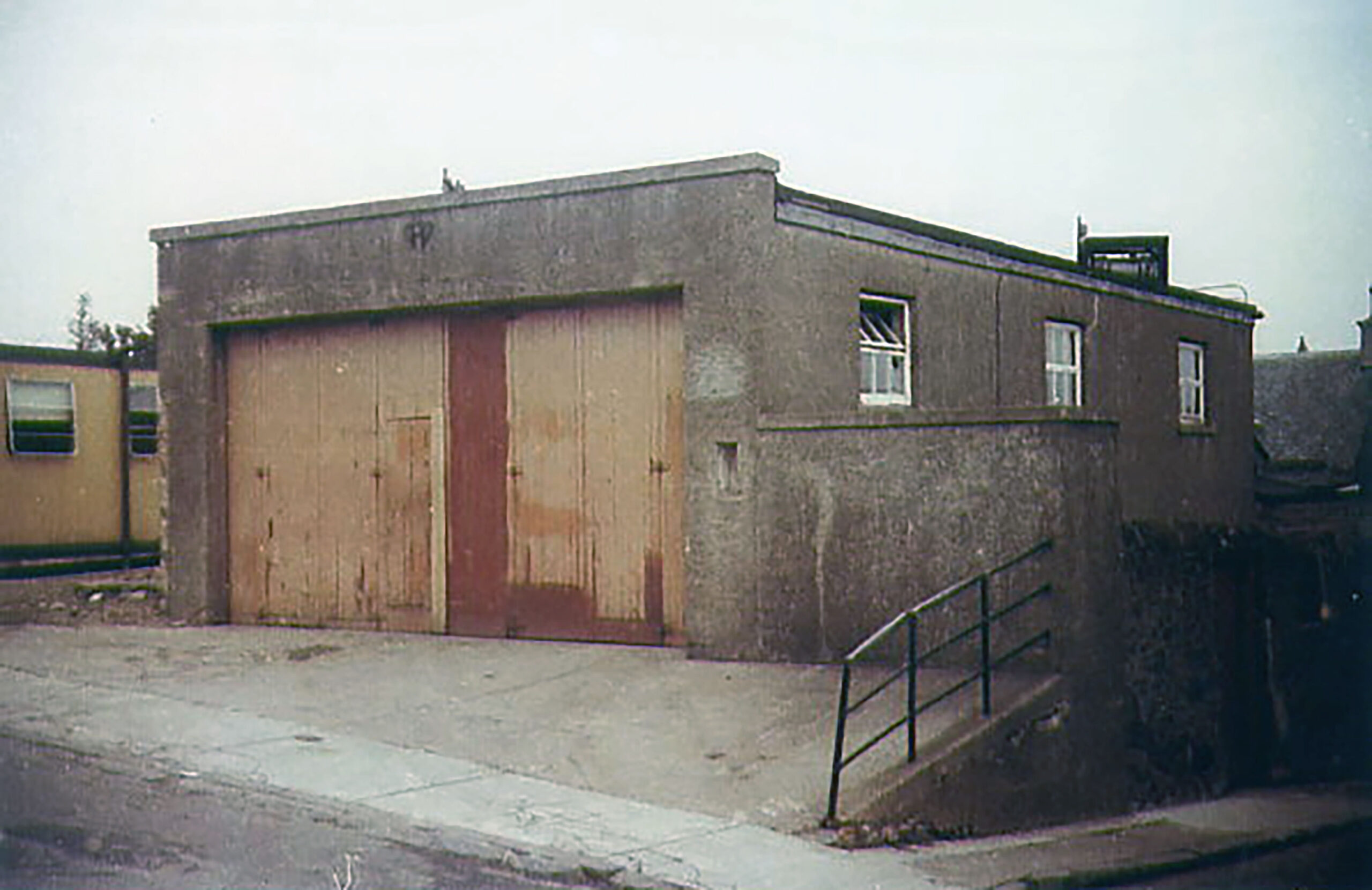 Former fire station in Dougall Street, which was in front of the Ladies British Legion timber clad premises 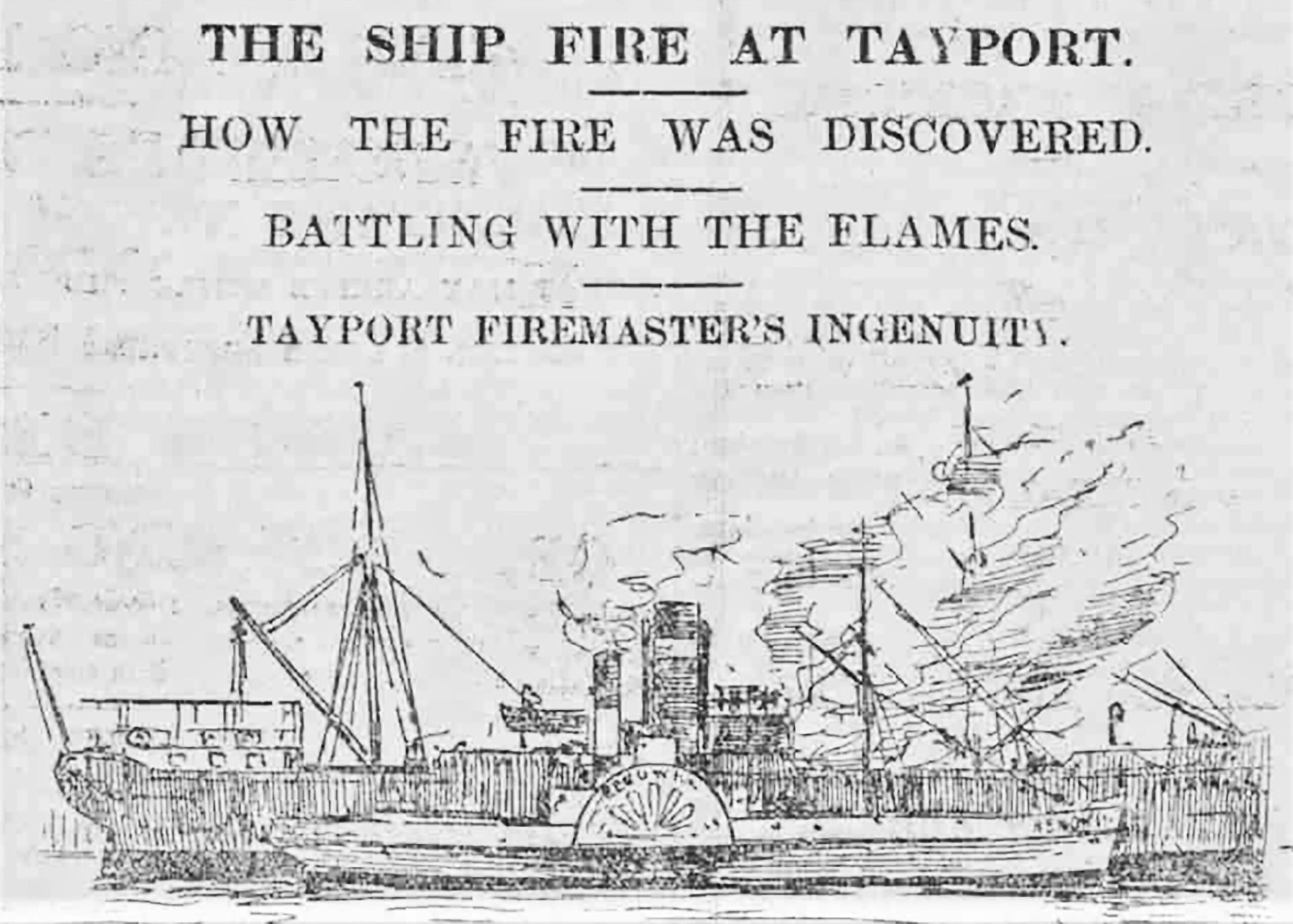