The estate included the entire parish of Ferry-Port-on-Craig and part of the parish of Forgan, as illustrated on the 1831 Estate Map and included the village of  Maryton (East Newport). Prior to the construction of the road parallel with the river in 1830, the access route to Newport was from the tollhouse on the King’s Highway via the Loan and the Chapel Lees towards the Craiglaw Cotton settlement at Jess Philp’s Dam and then by way of Causewayhead Farm. The Scots Parliament Act of 1669 had introduced an upkeep system known as “statute labour” with variable results, but a further series of Acts from 1774 onwards were introduced to regulate these upkeep obligations for the landowners. This area was covered by the St Andrews District of Trustees. The Fife Turnpike Road Act of 1790 brought further powers “to purchase  ground for and cause erect tollhouses and gates” 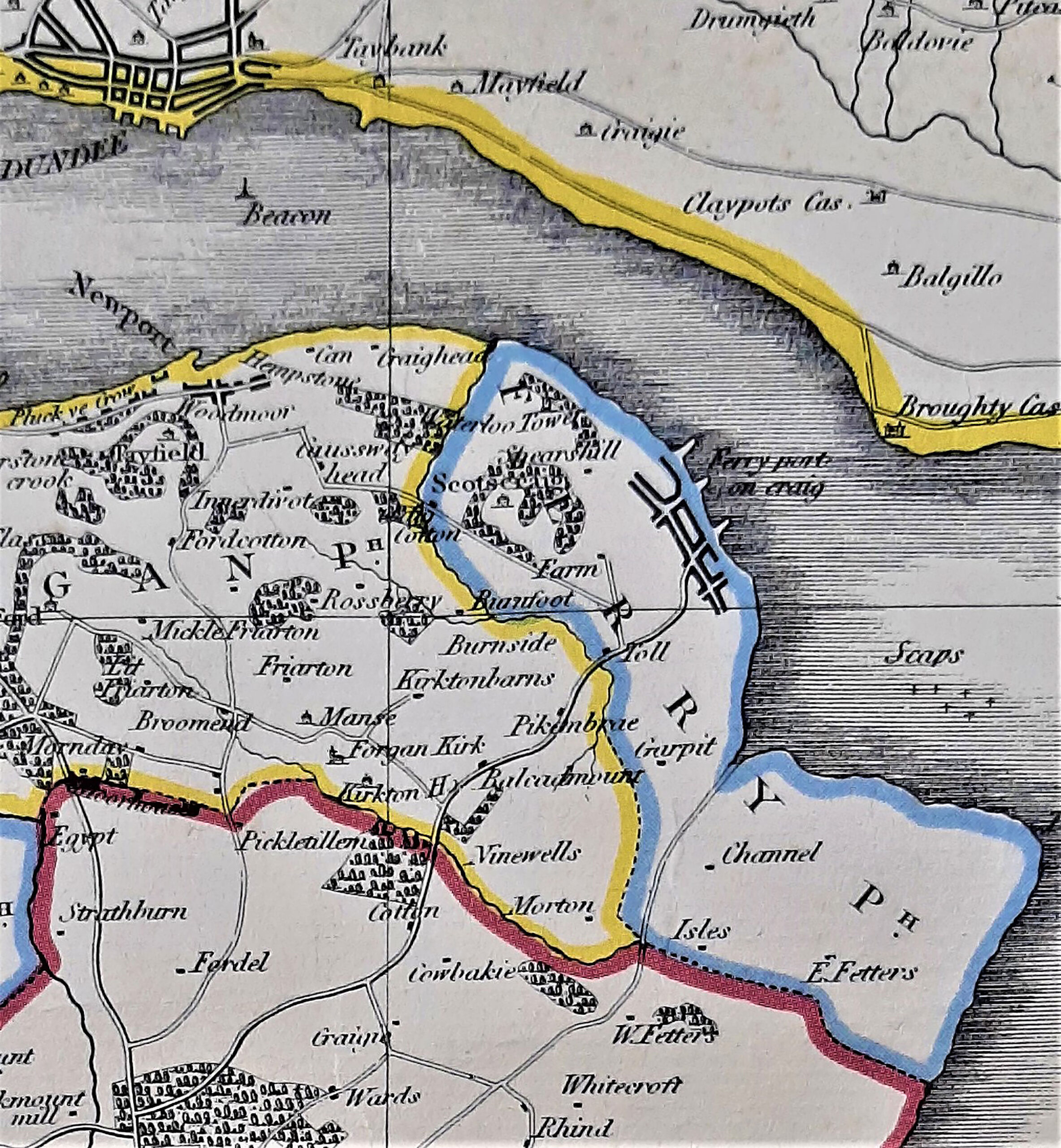 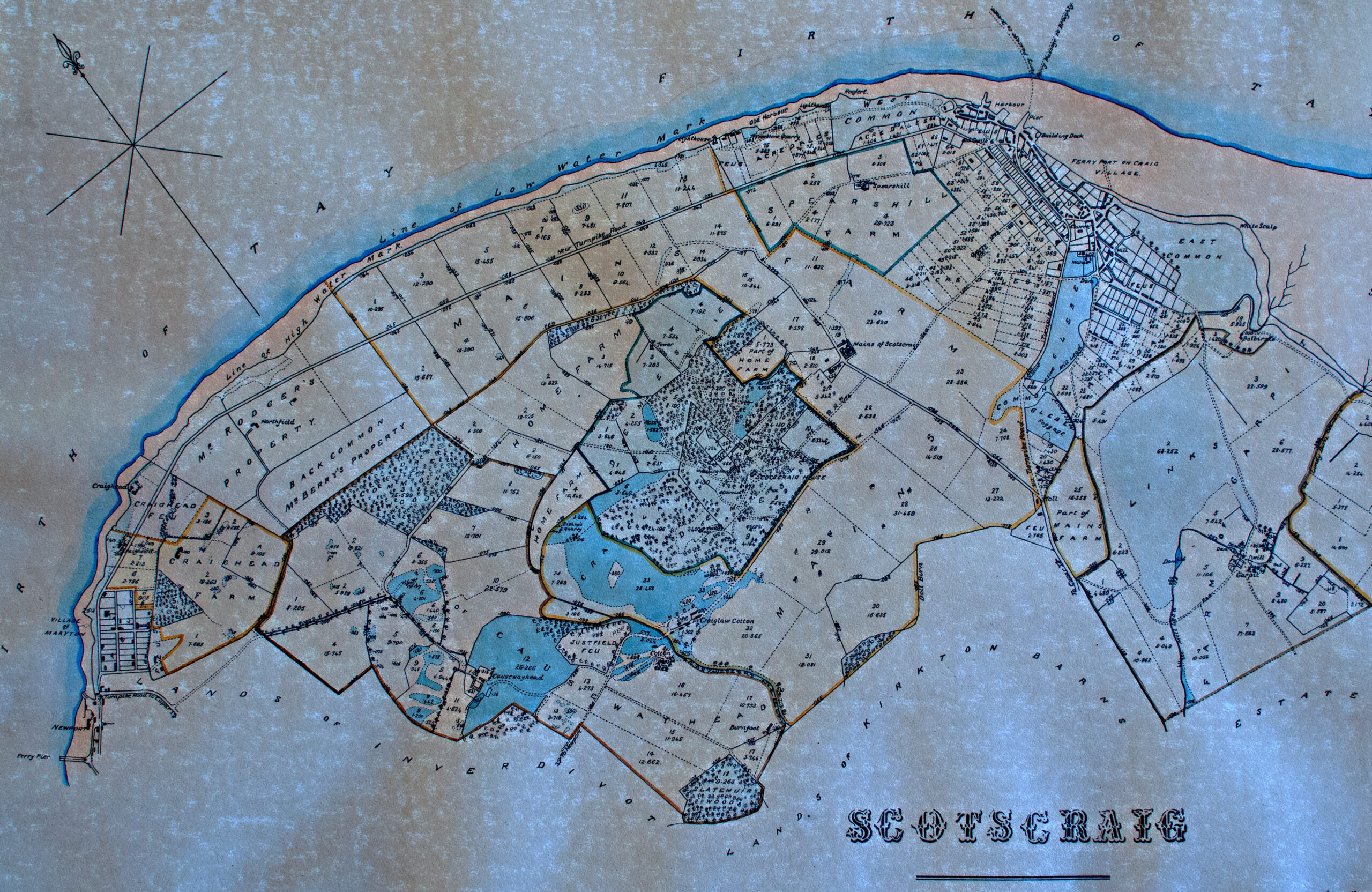 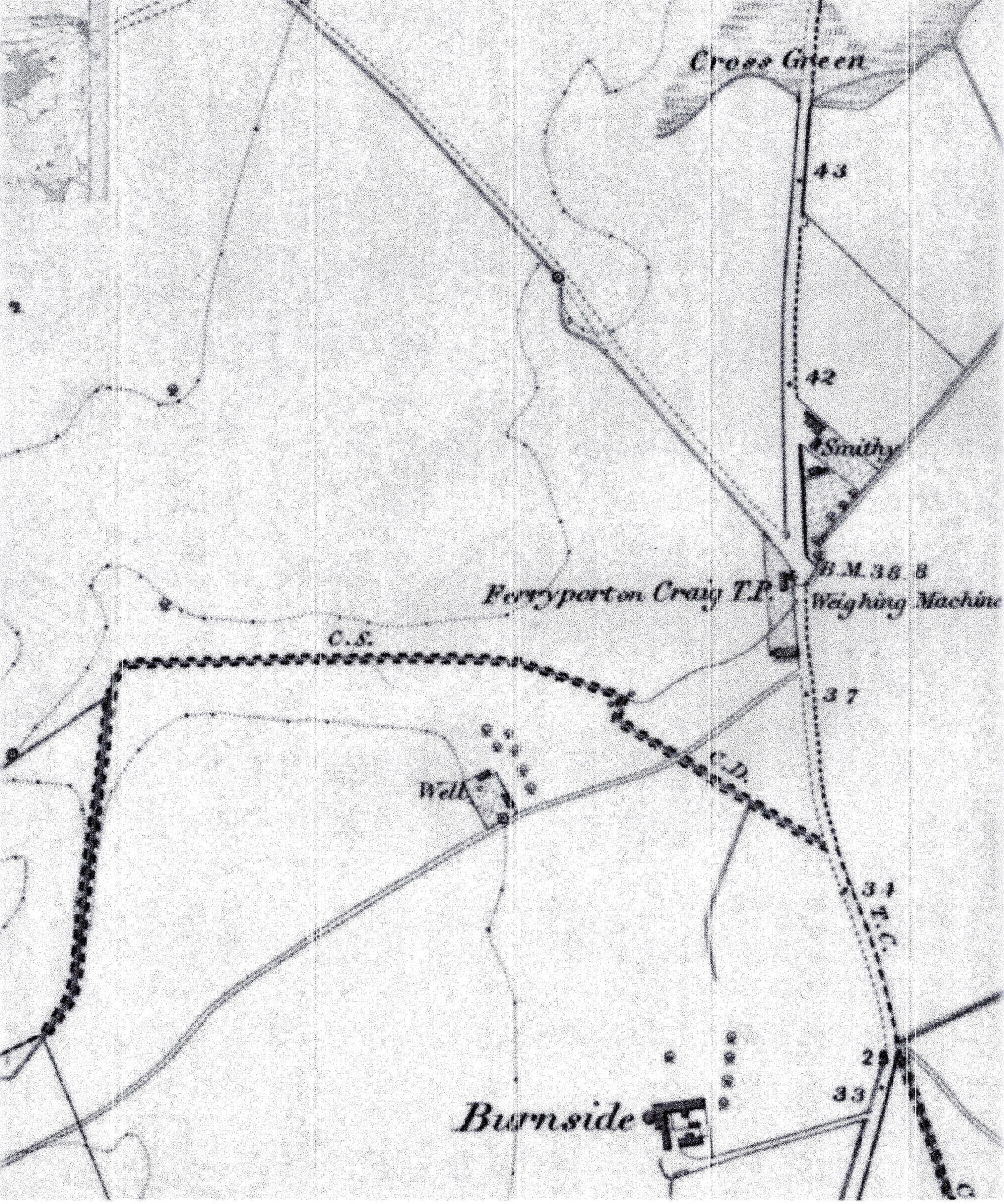 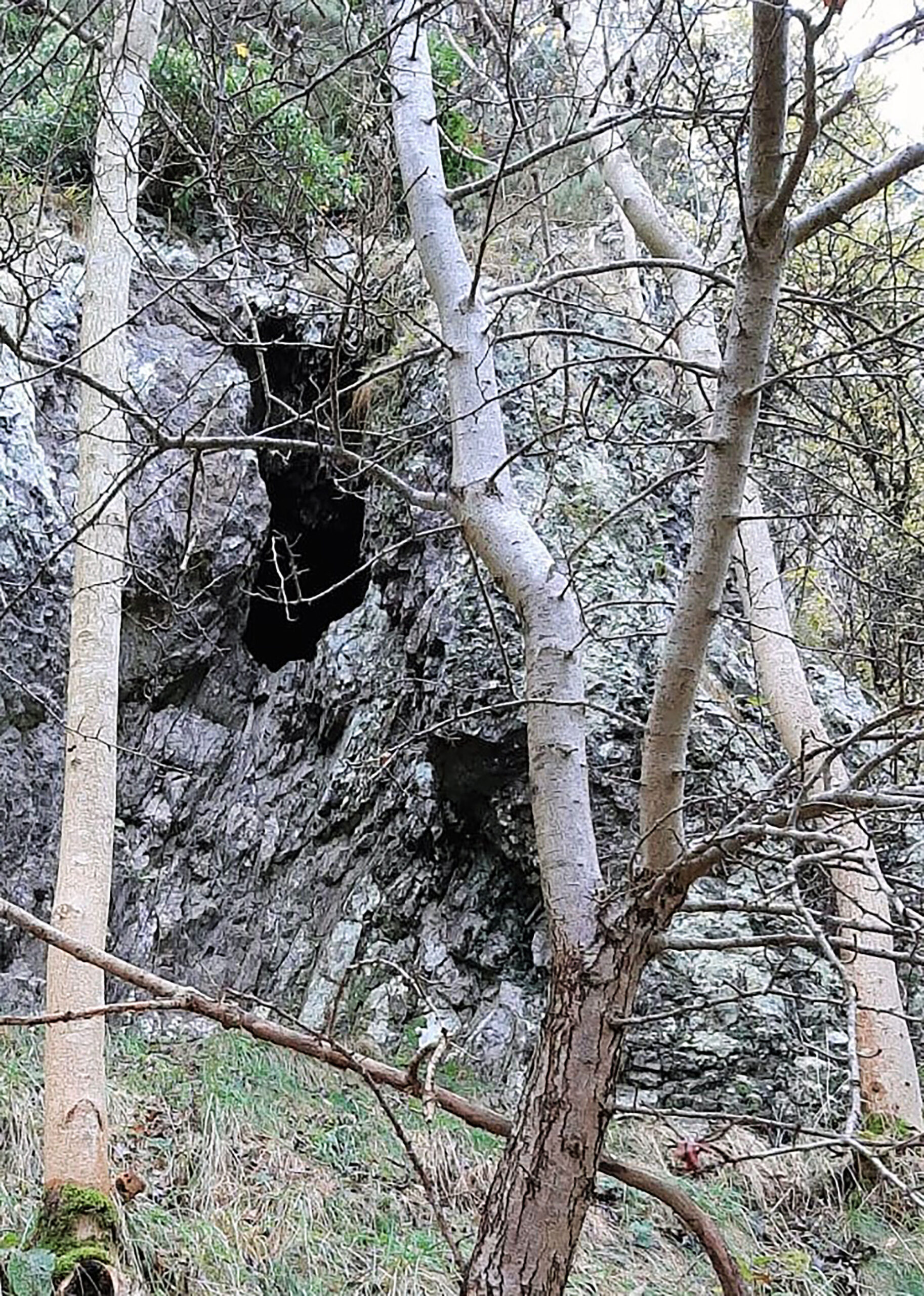 The Hermit’s Cave near Bishop's Quarry on Craiglaw 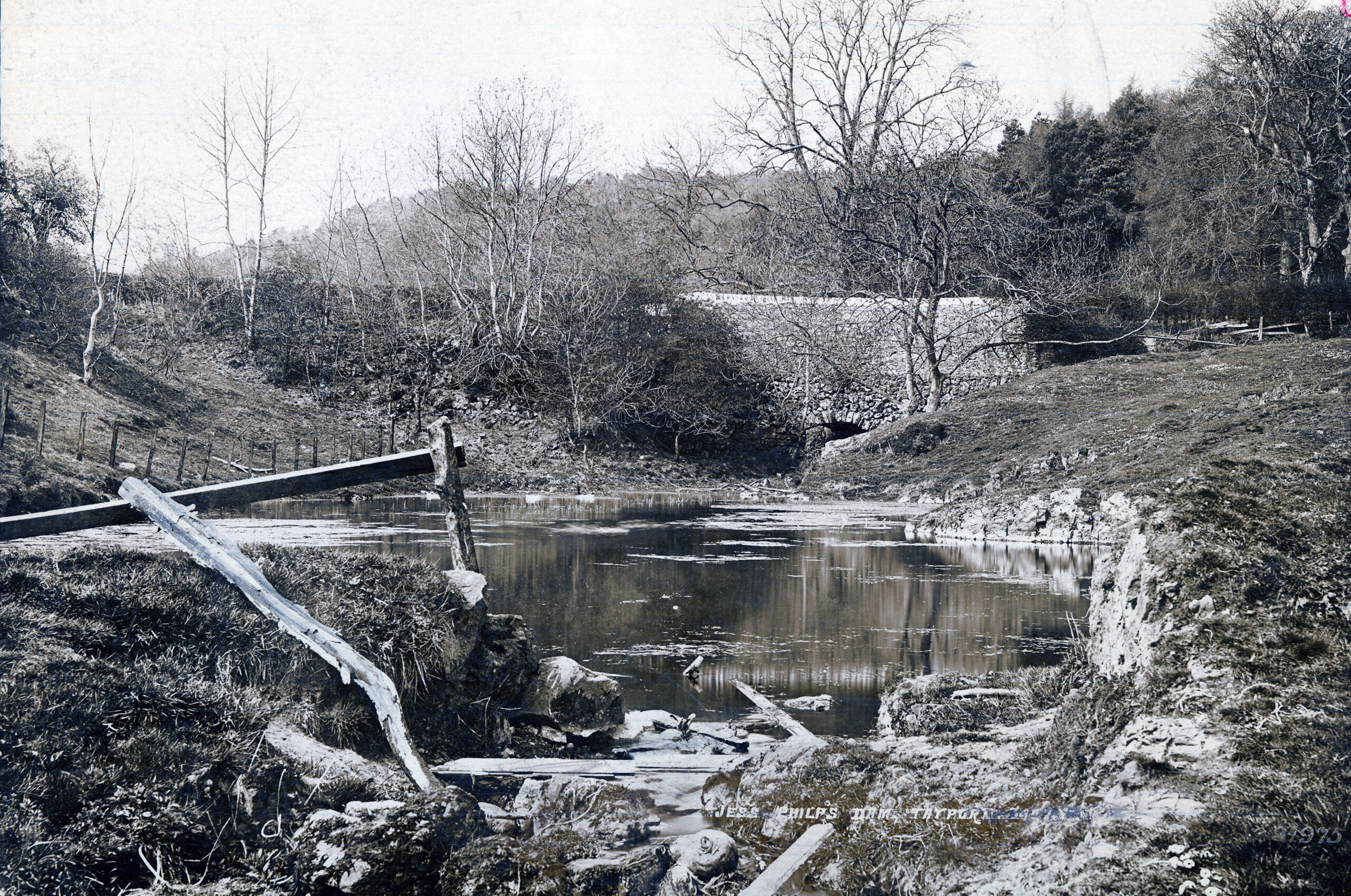 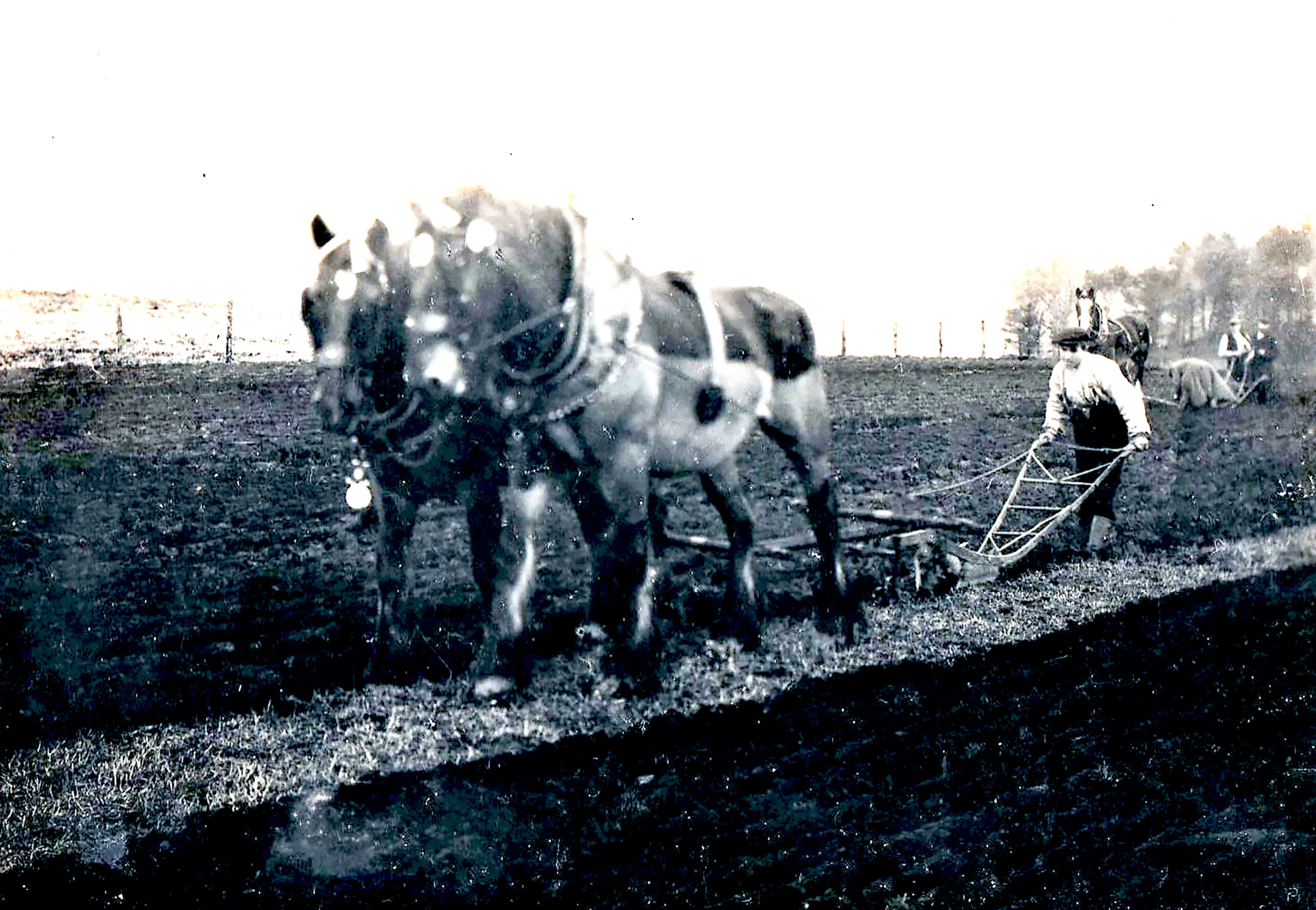 The burn flows from the area which was previously a loch in the area of Bishop Sharp’s Quarry, passes by the Hermit’s Cave then Jess Philp’s Dam near Washer Willie’s cottage, before carving a route through several areas of previous prehistoric and medieval agricultural settlements of national importance as recorded on Pastmap and Canmore. It is joined by the burn from Inverdovat at the area known as Burnfoot, at the bottom of the Doll Field. It is called the Doll Burn on the 1831 estate map from that junction onwards. It splits at the sluice along Coffin Walk, known locally as the Burn Edge, to transfer water along the lade to the site of the former Mill Dam at Pond Lane. This supplied water power to the sawmill and also filled the boating pond in later years, reaching the river at the Esplanade corner. The overflow burn from the sluice is joined by the burn from the former Ninewells Farm on the Morton road and continues down past Linksfield & Golf Crescent where it provided essential water for the early steam engines of the former Scotscraig Works. The Hope Map of 1769 shows additional areas of Mill Dam provided in the area of the Glebe fields and an area of loch at the Garpit fields, prior to the period of agricultural improvements.

www.pastmap.org.uk extract of historical areas around the route of the Scotscraig burn (Doll burn) from Burnfoot

“Remains of an old Chaple”

Referred to on the 1769 J Hope Map and is immediately to your left, in a field he calls the ‘Chaple Lees’, as you head up the Loan.    Sir J Scott (1927) notes “ ….Earl of Angus, bequeathed lands and fishings at Port-on-Craig to the Abbey of Arbroath, for the purposes of founding a hospital at Port-on-Craig.”  However further sources, including David Millar, advise that the land and fishings referred to, were in fact on the north ferry side in Angus. Simon Taylor (2008) advises “ we learn that around the late 1180s Earl Gilbride (Gillebrigte) of Angus had given land to Arbroath Abbey on which to build ‘ a hospital at Port-on-Craig’ The grant included ‘common pasture and all other easements of Monifieth (Monifod) ANG  and my fishing which extends from (the) Craig(que durat a Crag’) as far as my land stretches to the west “. It would seem however that before 1606 the parishioners of this northern part of Leuchars were served by a chapel of ease. It was likely St John’s chapel, first mentioned in 1597 in connection with Chapelton Ferry-Port-on-Craig on the lands of Scotscraig. The summary of graves in the Auld Kirk graveyard lists No.168 (chapel about one mile south, now in a field) Johne Barrie skipper 1613.  Further archaeological investigations were carried out in the area in 1992 as recorded on www.pastmap.org.uk

The burn edge footpath has long been known locally as “Coffin Walk” which may well be a reference to the days when the chapel was in use. 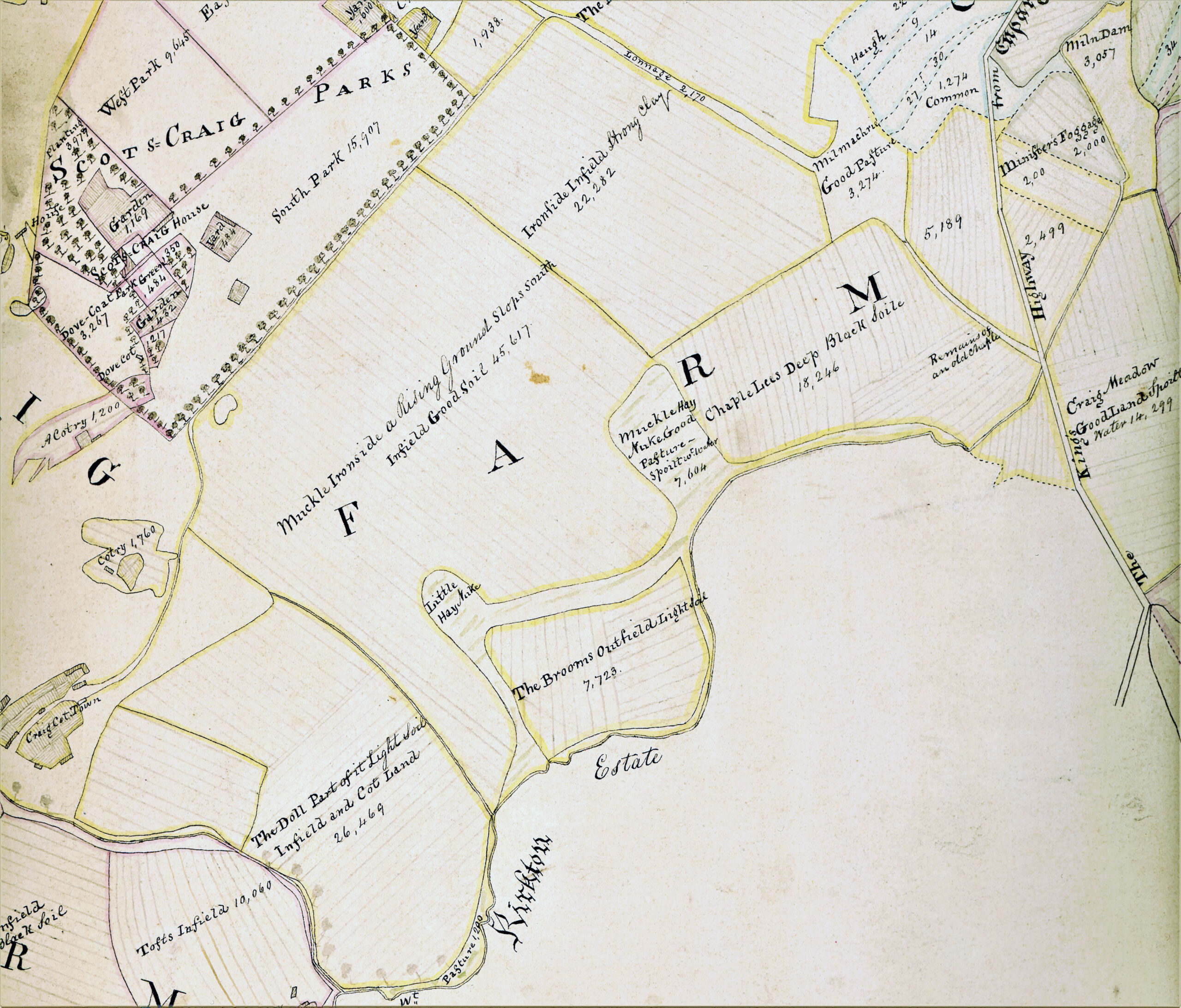 The Garpit Grain Mill water source is located over the fields approaching the Garpit corner, where it was brought from the Ninewells/Morton Lochs area and diverted into the pond on what is now Scotscraig Golf Course. The 1769 J Hope Map illustrates where a “Miln Dam and lade” was formed to drive the mill as well as other larger areas of water that are now drained from the fields. The 1831 estate map also shows the route of the water courses with the Mill Lead draining into the Lundy (sic) Burn.

1831 Scotscraig Estate map reflects the 3 water courses on 1769 map of the village and sourced from the landward areas of 1. Scotscraig Burn (Doll Burn) from Scotscraig/Inverdovat; 2. Ninewells Burn from Ninewells/Kirktonbarns & 3. Lundin Burn (Lundy Burn) from Morton/Leuchars

A Major Military Exercise took place in this area in 1970 (Polex Leuchars) when the Army set up camp in the Craig Meadow to facilitate the organisation of a temporary fuel supply facility to RAF Leuchars. This involved the RFA tanker Green Rover pumping fuel ashore at Tayport harbour, then it travelled overland through a temporary pipeline via Tentsmuir Forest. Kingfishers, white egrets, otters and roe deer have since been seen occasionally in this area.