Scotscraig within the Regality of St Andrews

In 1598 the “toun and lands of South Ferry of Port-on-Craig were erected into a burgh of barony , in favour of Robert Durie” , as Laird of Scotscraig. It was earlier however, following the summer of 1560, that saw parishes develop into legal units of civil government as well as ecclesiastical organisations.

South Ferrietoun was referred to as part of the Lordship and Barony of Scotscraig & Regality of St. Andrews and remained part of Leuchars parish until disjoined in 1602, shortly before the union of the crowns, when the separate parish of Ferry-Port-On-Craig was established and in 1606 was erected by the Parliament. 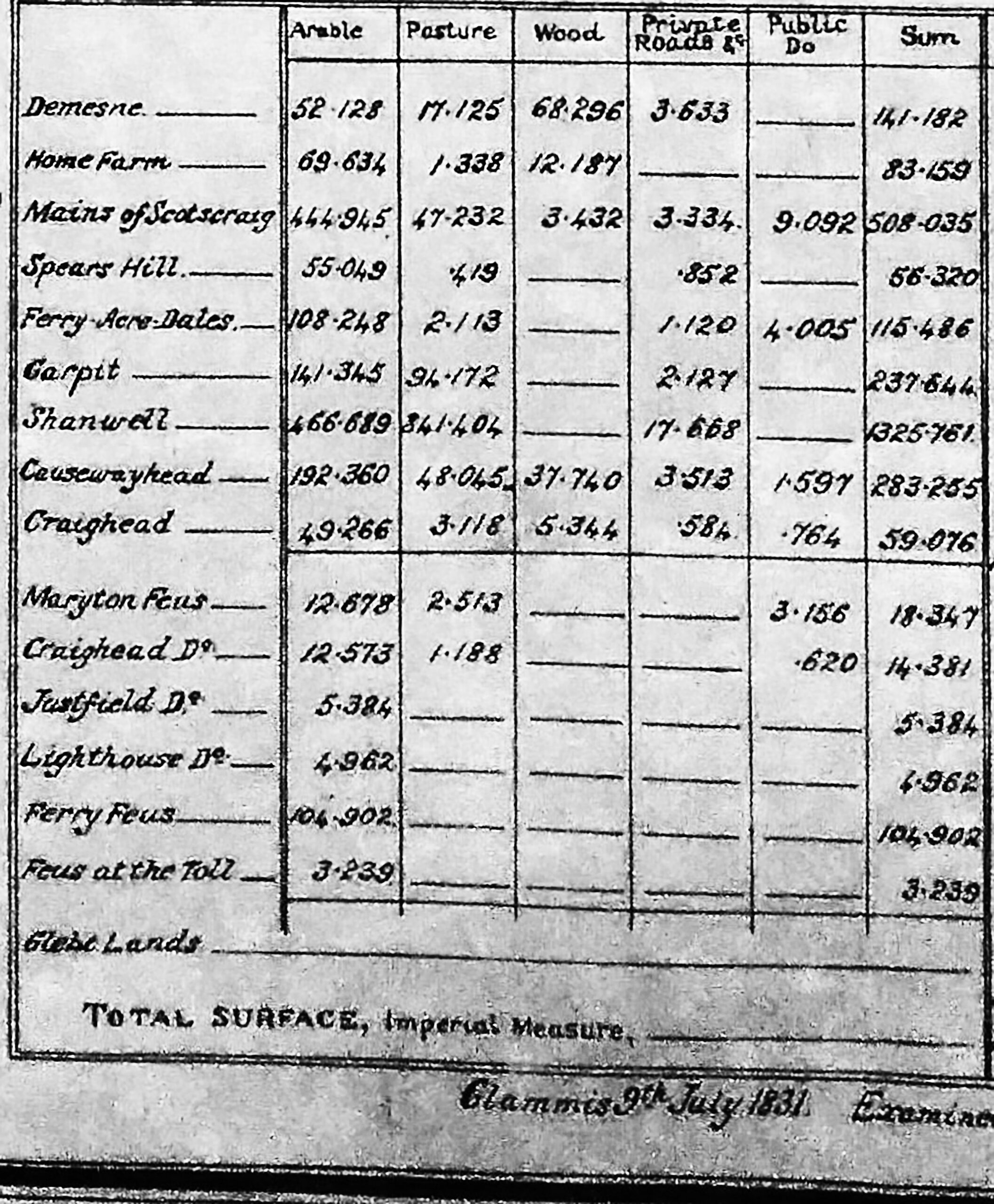 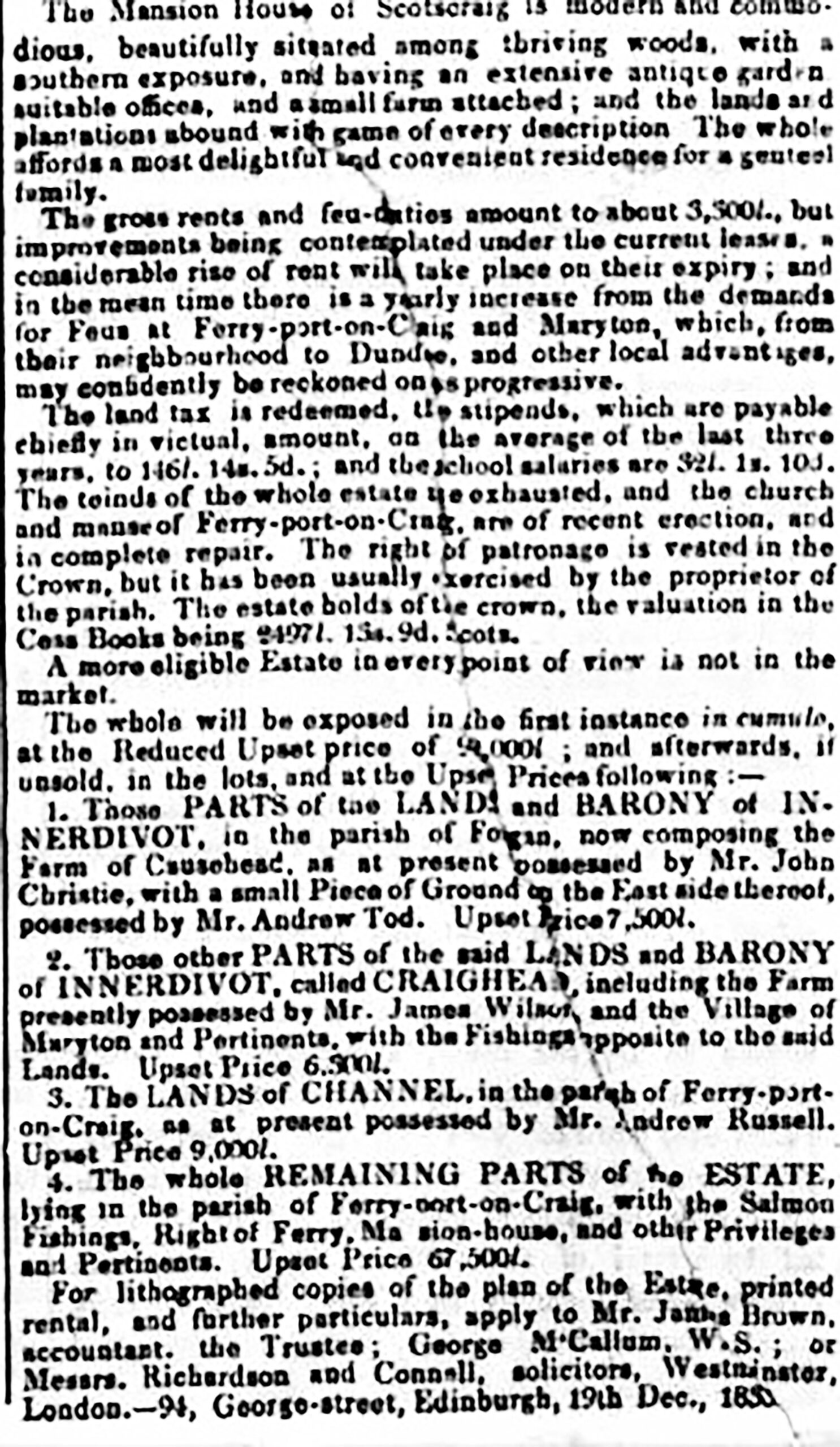 Sale of Barony of Scotscraig 1833 by Dalgleish family 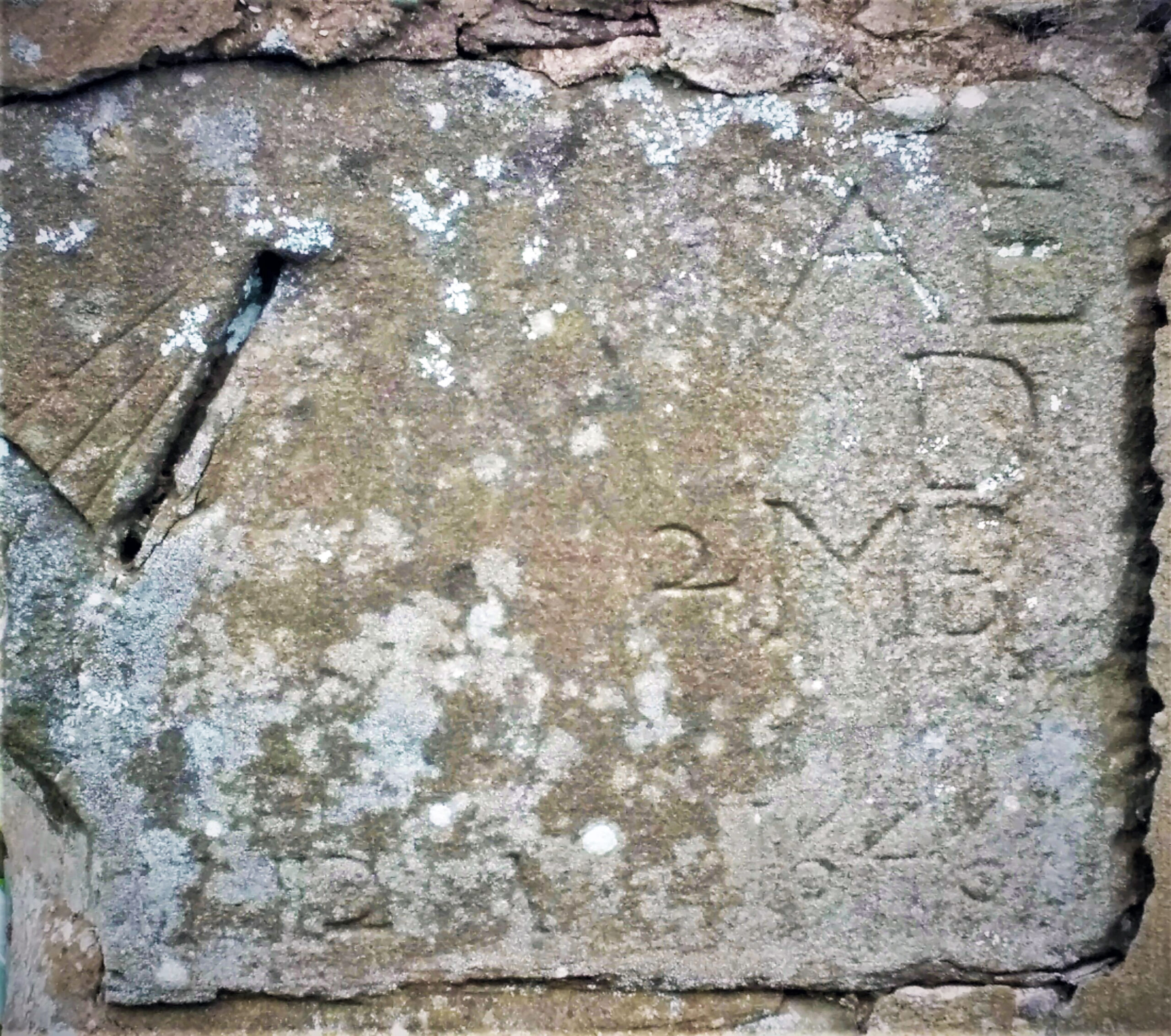 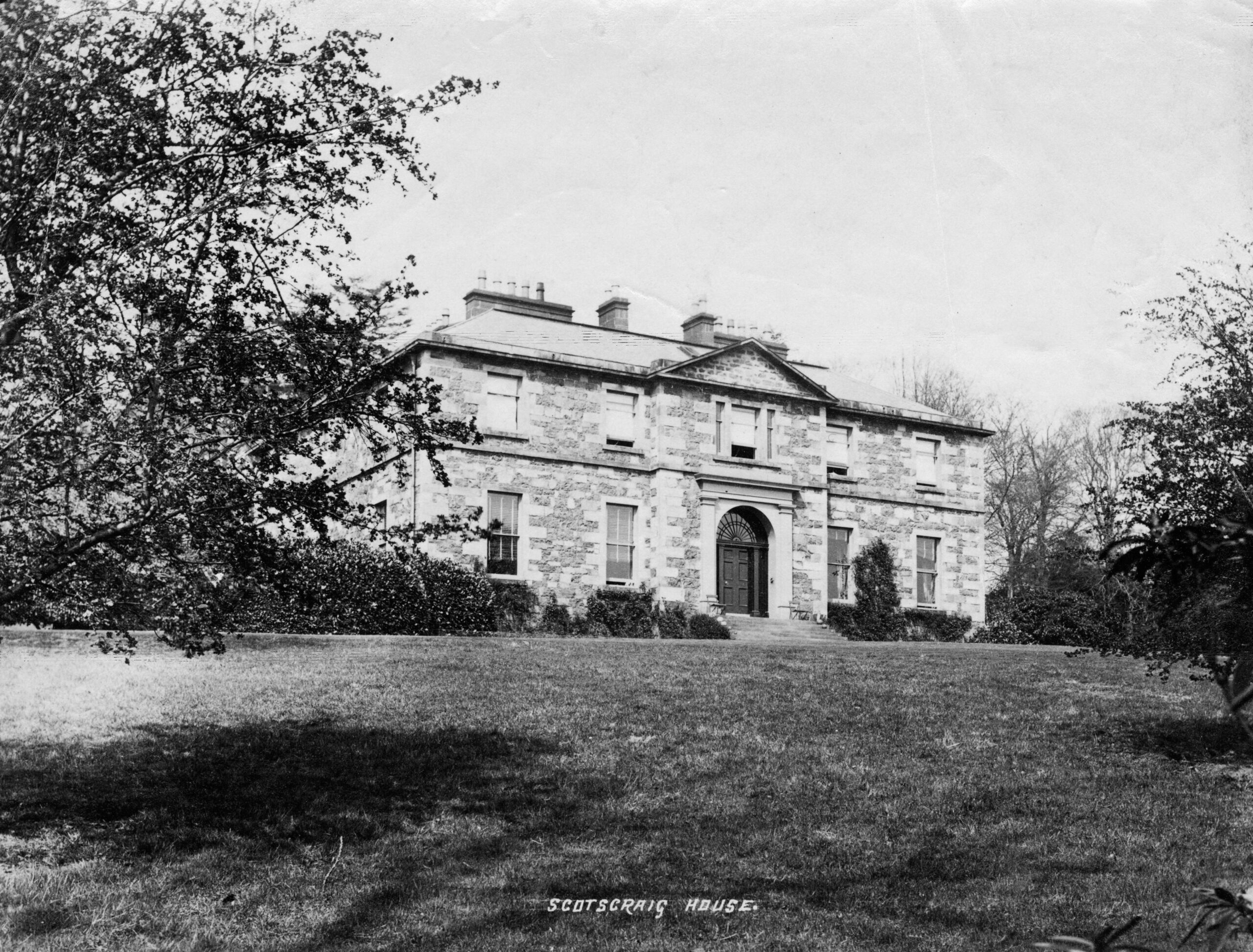 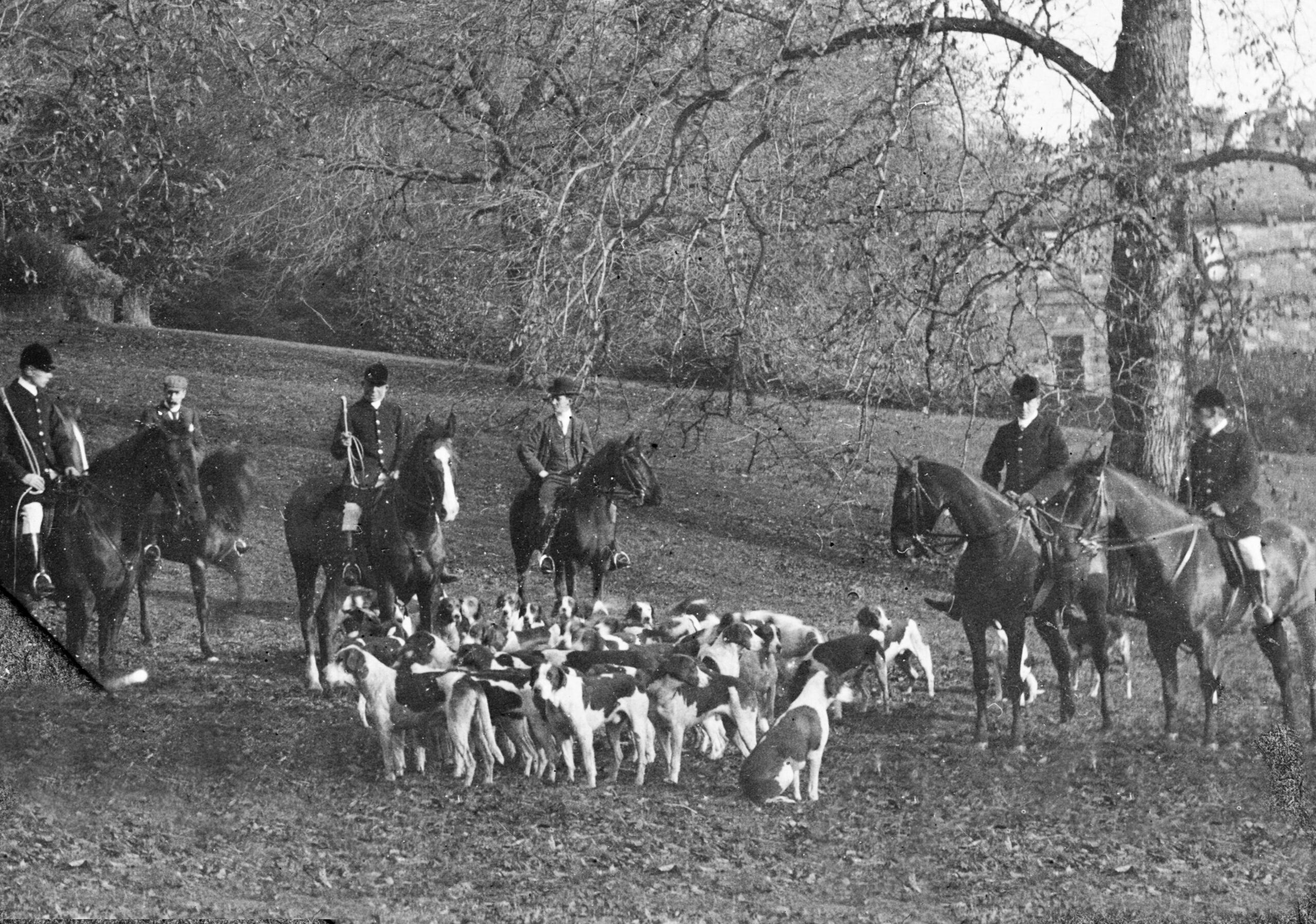 The Estate of Scotscraig has an intriguing history as A H Millar (1895) advises, with dubious authority, that the estate was feued in 1240 during the reign of Alexander II, by one of the bishops to Sir Michael Scott of Balwearie, the father of Michael Scott the wizard. It also passed to the Duries, the Ramsays, the Buchanans, the Erskines by marriage, the Sharps and the Colvilles. The Dalgleish family, who were related to the Colvilles through marriage, took over the estate circa 1728 and fulfilled a major role in the area for at least four generations. In 1834 the Barony of Scotscraig estate was bought by the Dougall family, whilst the lands of Maryton, Causewayhead and Craighead in the Barony of Innerdivot (sic) within the parish of Forgan, were purchased by the Berrys of Tayfield. Admiral William Heriot Maitland a grandson of William Dalgleish, married into the Dougall family in 1851 and adopted the name Maitland Dougall.

The trustees of the Maitland Dougall family in turn sold the estate to the City of Dundee in 1918. It is reported the city had expansion aspirations from an industrial perspective, which fortunately did not come to fruition. In 1924 Dundee Council sold by public roup, the 811 acres which consisted of the mansion house and grounds, the farms of Scotscraig Mains and Burnside to James Colville Henderson whose family ownership continued for the following  55 years. The sale in 1924 also included the Shanwell Farm of which the 1200 acres forming part of the Shanwell Links and Easter Fetters area of Tentsmuir, was bought by the Forestry Commission. The farm of Scotscraig was subsequently bought by the Lamont family in 1979. At the time of the formation of the parish, Sir John Buchanan and his wife Margaret Hartsyde who gained some notoriety from her role as an aide to Queen Anne, had their coat of arms incorporated on the Auld Kirk steeple along with his daughter Margaret and her husband Sir Arthur Erskine, who became the laird when Sir John died in 1644. He took over when the country was in the throes of Civil War during the Wars of the Three Kingdoms 1638-1660  in the time of Charles I who had introduced his Book of Common Prayer in 1637.  This created divisions which resulted in the Covenanters signing the National Covenant in 1638. In the absence of the Earl Marischal, J Scott (1927) advises “ Arthur Erskine of Scotscraig who was depute Keeper of the Regalia of Scotland in 1650, was instructed to keep and transport them as the Committee of Estates gave directions”.

“In the Parliament held at Perth on the 26th November 1650, Arthur Erskine again presented the Crown, Sceptre, and Sword, and at the close of the sitting these emblems were delivered to Scotscraig for safe keeping in the name of Earl Marchell.”  Sir J. Scott goes on to advise that Erskine further presented them on 30th December 1650 and to the Coronation of Charles II at Scone on 1st January 1651. Erskine was killed at the battle of Worcester in  September 1651 by the forces of Oliver Cromwell, at a time when major divisions within the country were still prevalent. At that time he was leading his Covenanter Scotscraig’s Regiment of Horse (1649-1651) whereas previously he had led his Scotscraig’s the Ministers’ Regiment of Foot, forming part of Leven’s army in England during 1643-1646 (Stuart Reid 2012- Crown Covenant and Cromwell 1639-1651). Arthur was succeeded by his son John who held the estate until it was sold in 1667.

Archbishop James Sharp  became Laird of Scotscraig in 1667. D Young (1969) records that “Charles II equally left presbyteries alone, and replaced the General Assembly with a set of bishops, under control of himself through the Privy Council and Parliament. The man picked for the archbishop of St. Andrews was James Sharp, whom Cromwell dubbed “Sharp of that Ilk“. The repression was exacerbated in 1679, when on 3 May, Sharp drove towards St Andrews on his way from Edinburgh. At Magus Muir, three miles off, he was murdered when his coach was waylaid by nine Covenanters, led by David Hackston of Rathillet and his brother-in-law, Balfour of Kinloch. The location is recognised by a memorial and thereafter the Archbishop’s son succeeded him to the estate. W H Millar (1895) advises, from the details of the remaining gable and portion of wall, the original mansion of Scotscraig was likely erected in the fifteenth century. The gate keystone to what was once a gracefully laid out walled garden, records the 1667 coat of arms of the Archbishop. www.pastmap.co.uk The O.S. maps previously recorded the Craig Law location of both “Archbishop Sharp’s Quarry” and the “Hermit’s Cave”. J S Neish (1890) records the days of public enjoyment of the narrow path to the cave as well as the view from the top of Waterloo Tower on the Hare Law opposite. 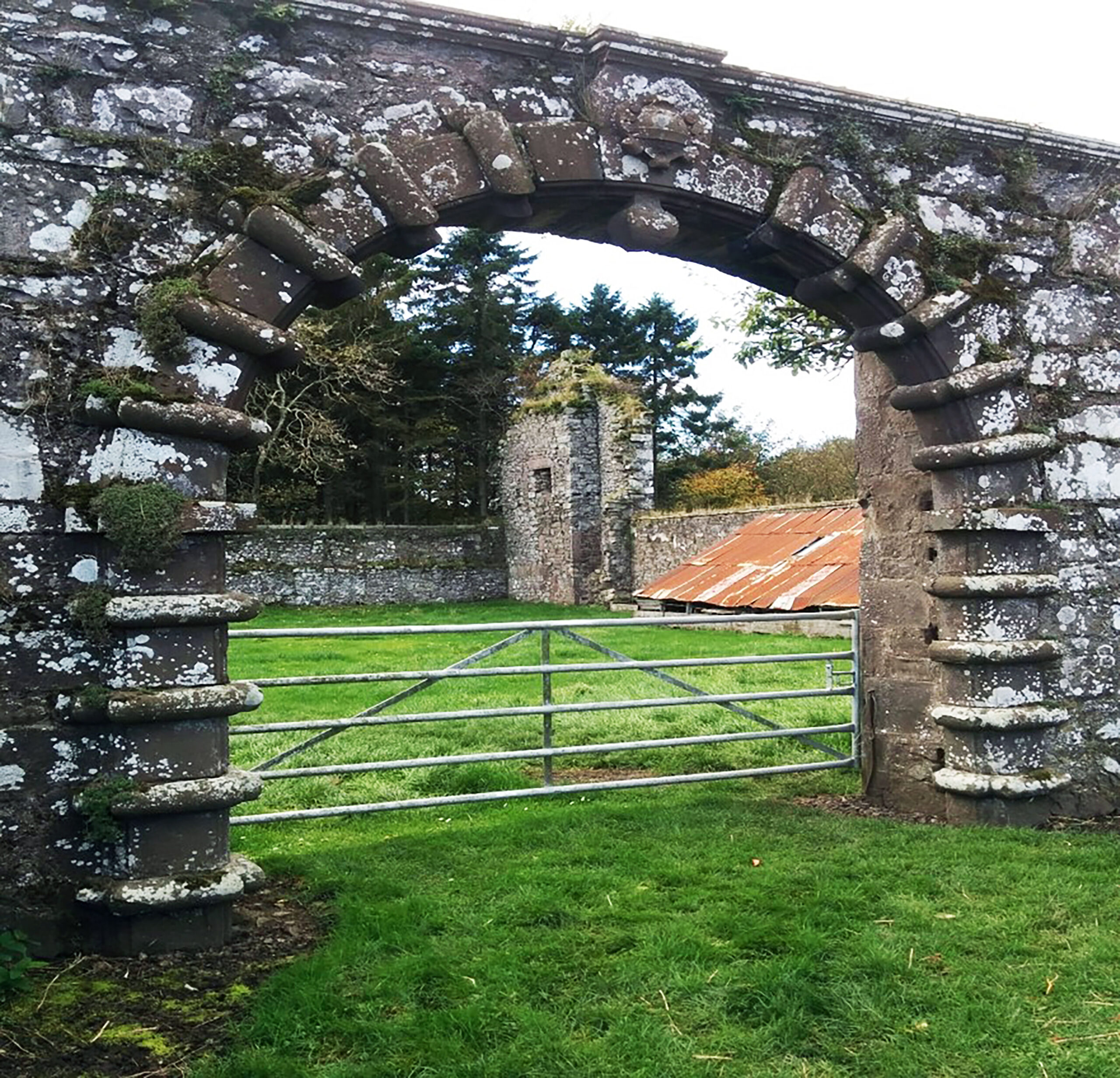 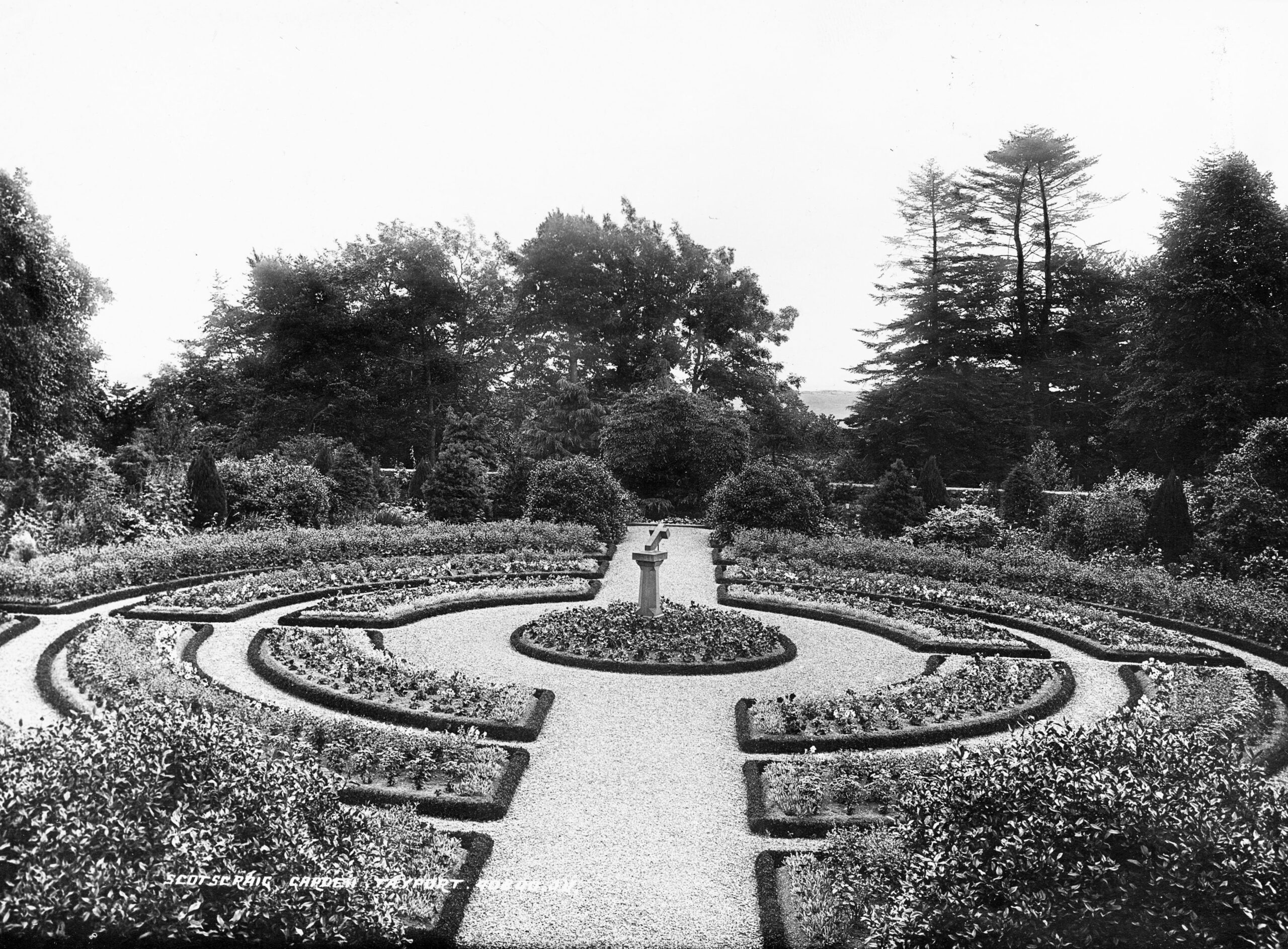 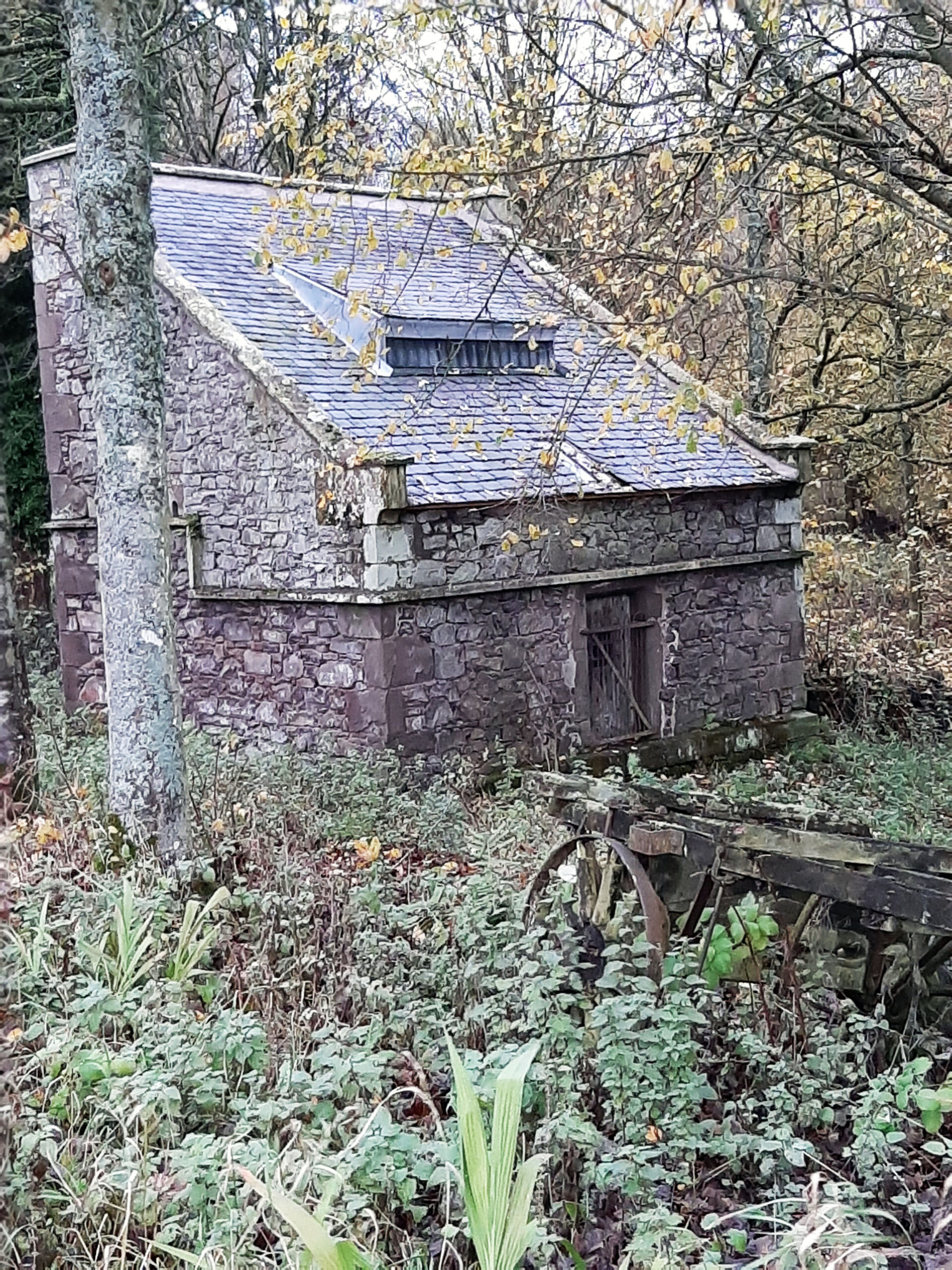 Shown on J Hope’s Map of 1769 as Common Land being crossed by the King’s Highway and named the Cross Greens on the 1830s feus map. The area subsequently developed as a play park was largely reclaimed by upfill spoil and generally seemed to enjoy the same Commonty rights of privilege for both the feuars and travellers to the ferry. Some of those privileges were exercised by the travelling community up until the 1940s. 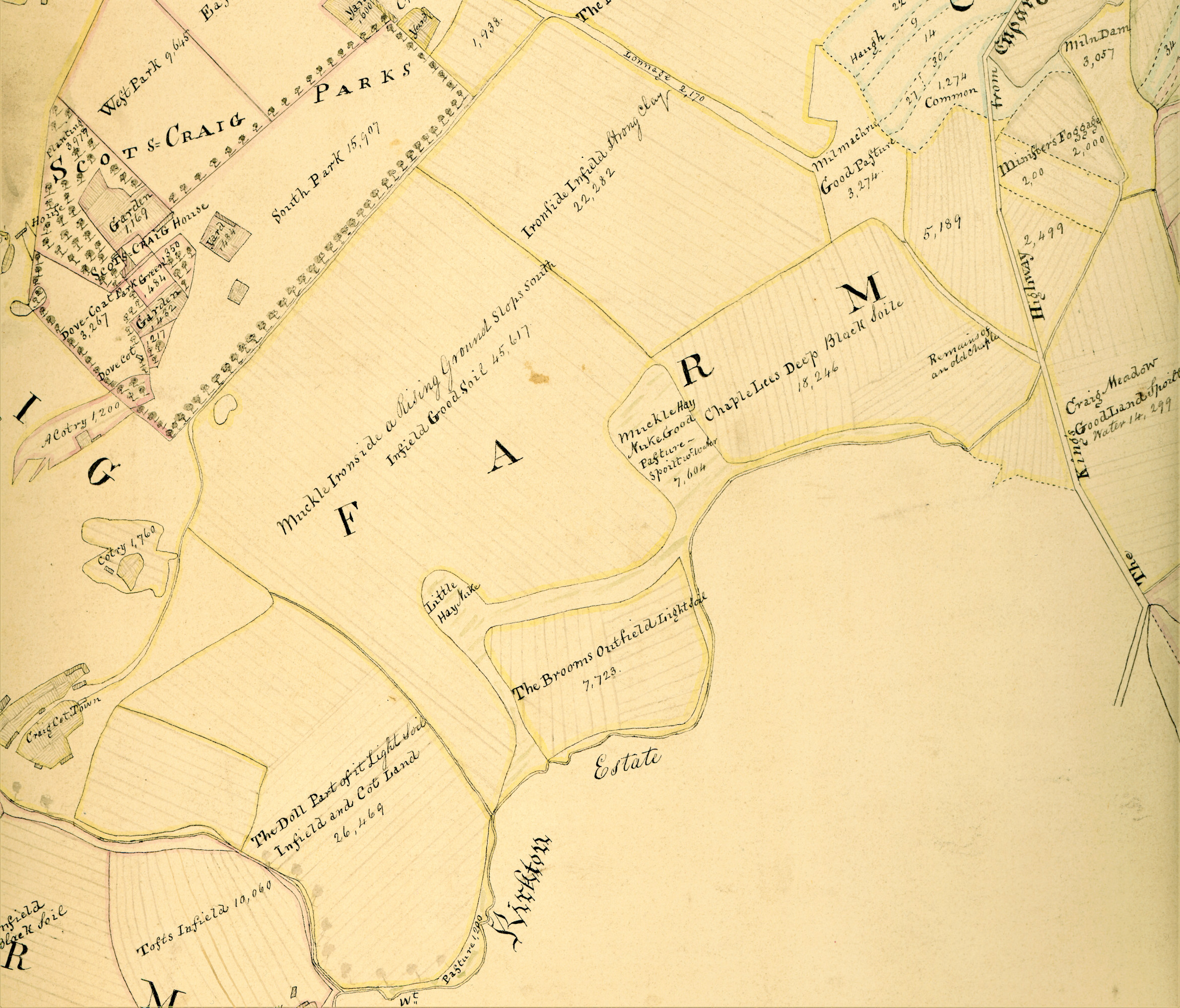 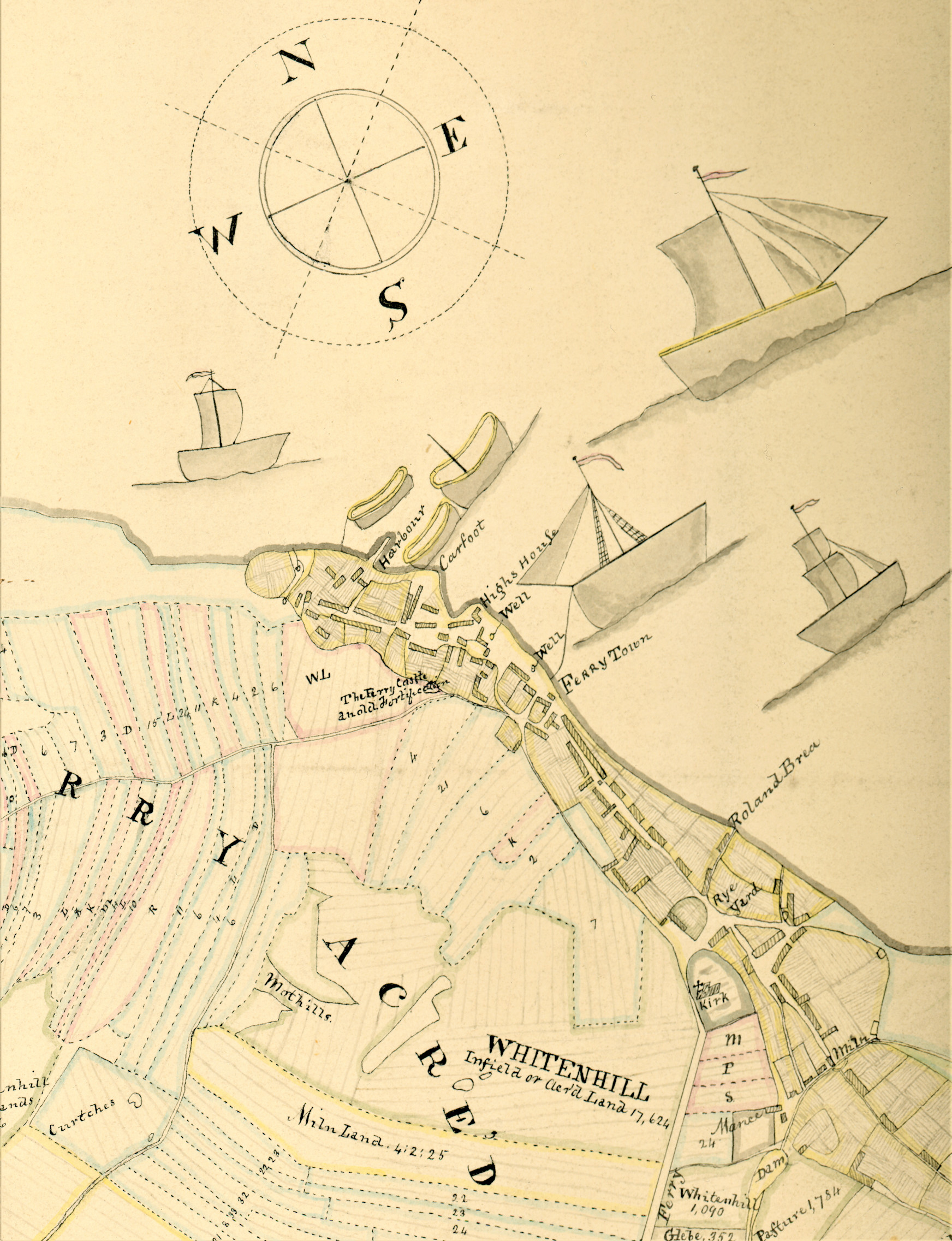 The 1769 map of the Ferry Acred Land of the Estate