The hall was widely used by the community for early film screenings, concerts, public lectures and even a boxing contest. One public gathering included a speech in 1902 by  local MP and future Prime Minister, the RT. Hon. H.H. Asquith, who drew cheers with his reference to the recent conclusion of the South African War. March 1907 saw the Tayport Choral Society perform “KING ARTHUR with Orchestral Accompaniment” and included the notable artist Frank Laing among the featured soloists. The Tayside Record newspaper of Saturday November 4, 1911 reported that the Miniature Rifle Club had “entered into possession of its new indoor range in the Volunteer Hall. The range has a distance of 25 yards and is well equipped and splendidly fitted up.” It also reported that they took part in a friendly match with Newport on 23rd October 1911 from which they emerged victorious. 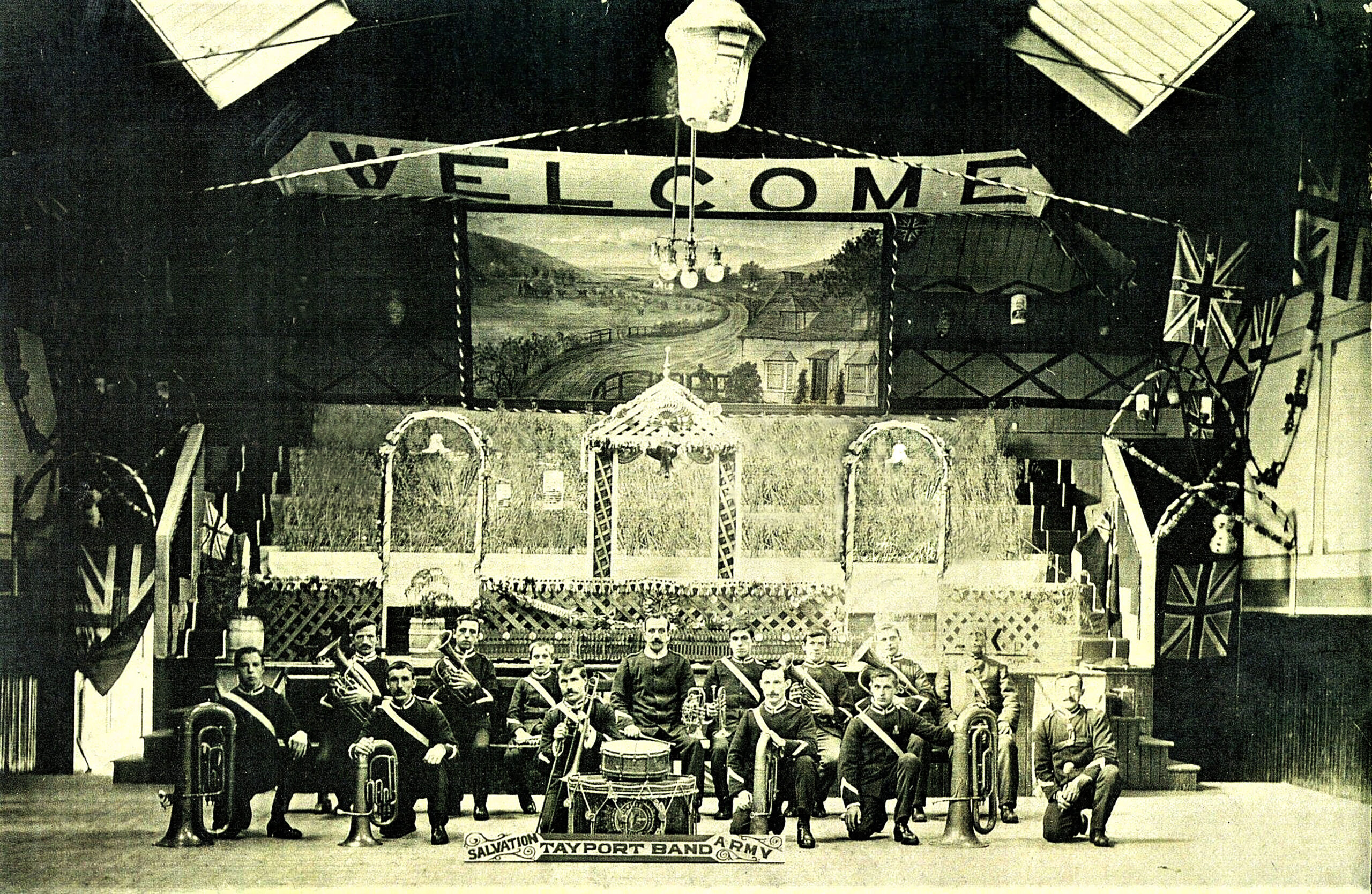 Although in earlier days to satisfy the public’s demand for movies, ‘Grand Cinematograph Entertainments’ had been held in the Temperance Hall, the town’s Picture House was officially opened on the 20th October 1931 in what had been the former Volunteer Drill Hall. There was a temporary closure on the 19th June 1946, following a fire which destroyed its interior. Rubble from the fire was reputably used to help build the balcony seating area prior to the re-opening on the 17th of March 1947, with a screening of the Errol Flynn epic, San Antonio. The Picture House closed its doors for the last time on the 30th August 1968, with a screening of The Sand Pebbles, leaving fond memories of the hard front seats, the elevated balcony superior seating and the queue for entry winding from the Queen Street entrance round into King Street. Friendly local staff employed by J.B. Milne, ensured a good atmosphere for enjoyment by all ages, particularly unaccompanied youngsters and young romantics. Thereafter the historic old building was put to good use in storing furniture, whilst still retaining many of the original features of its cinema era. 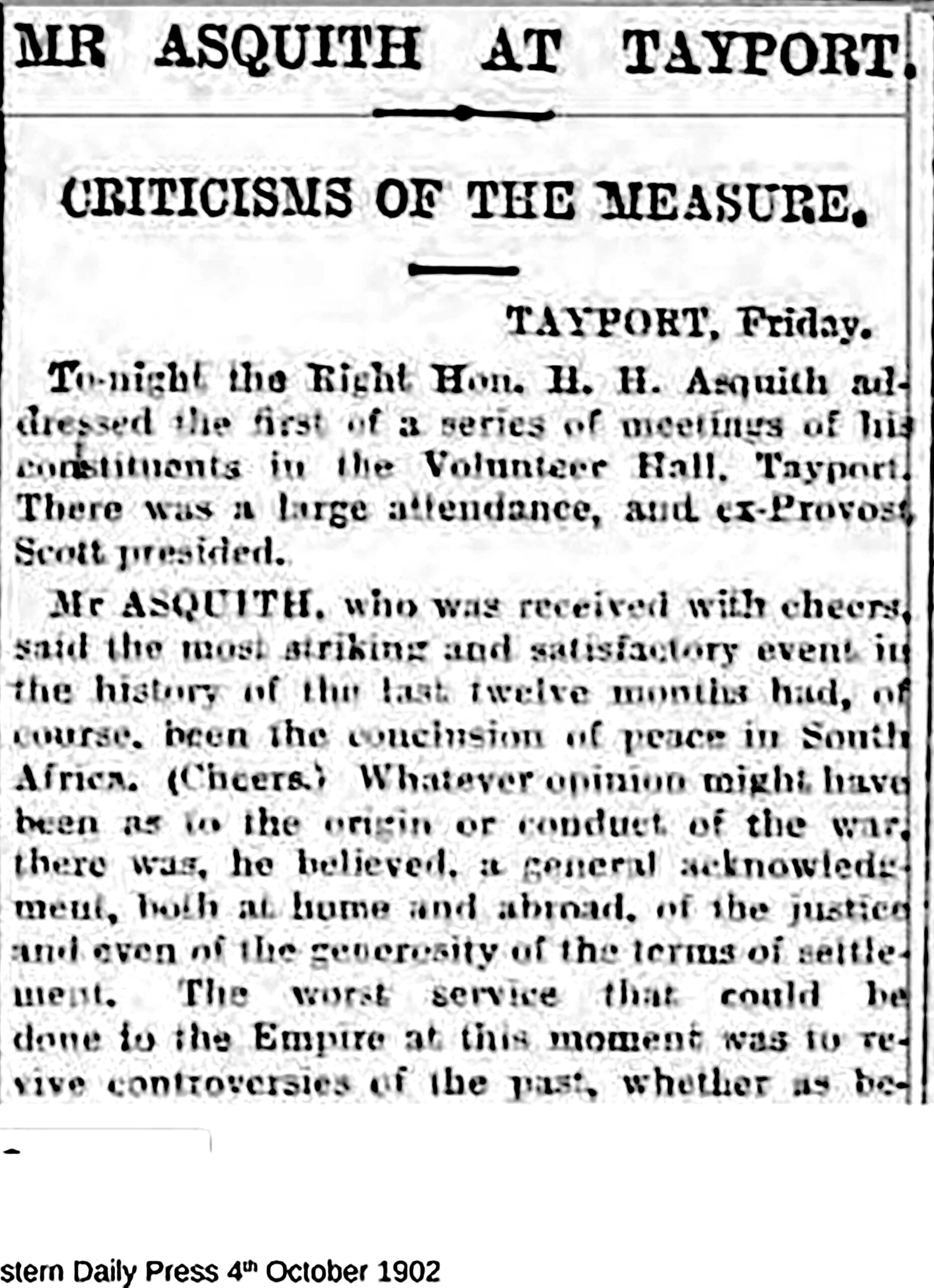 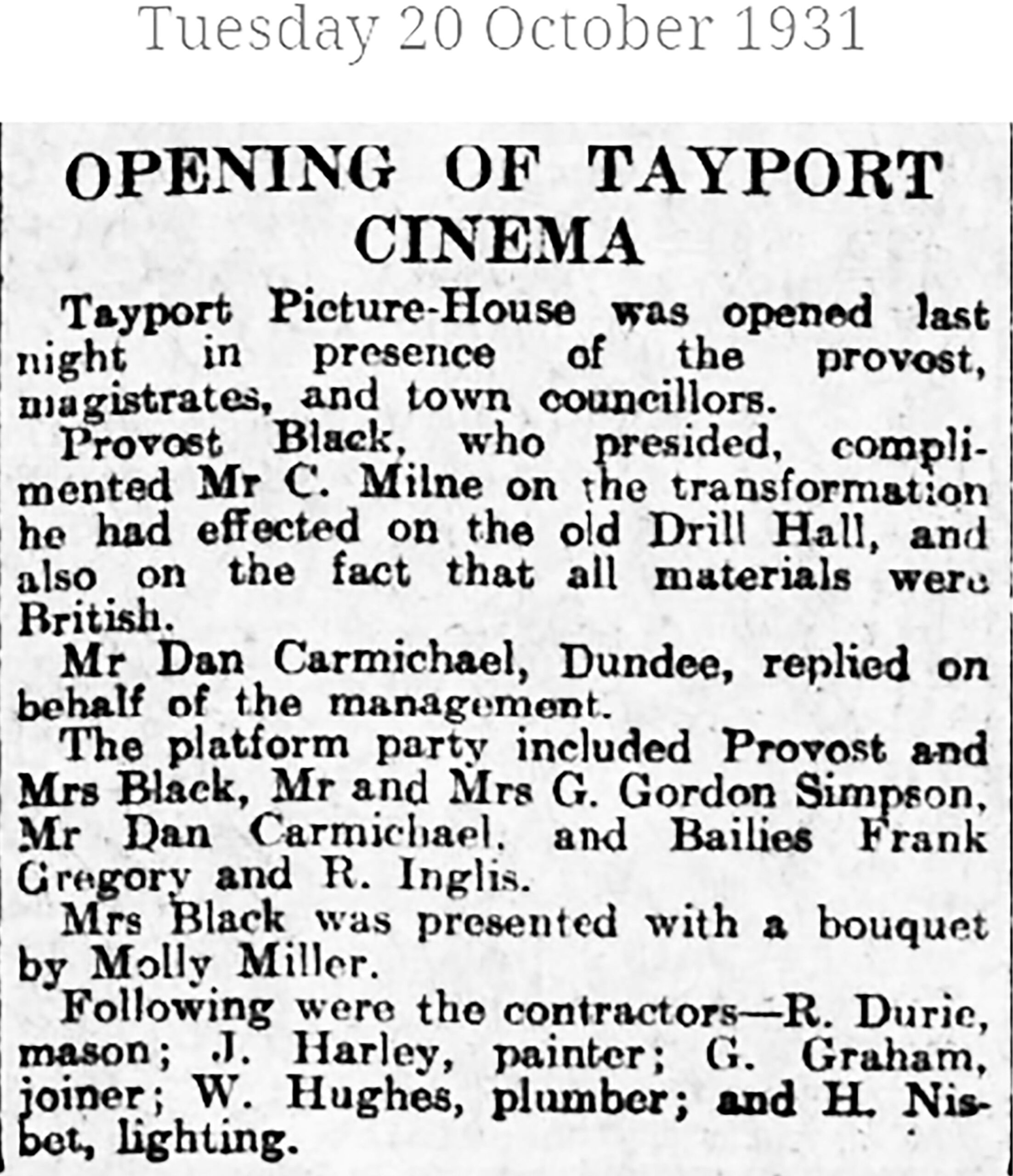 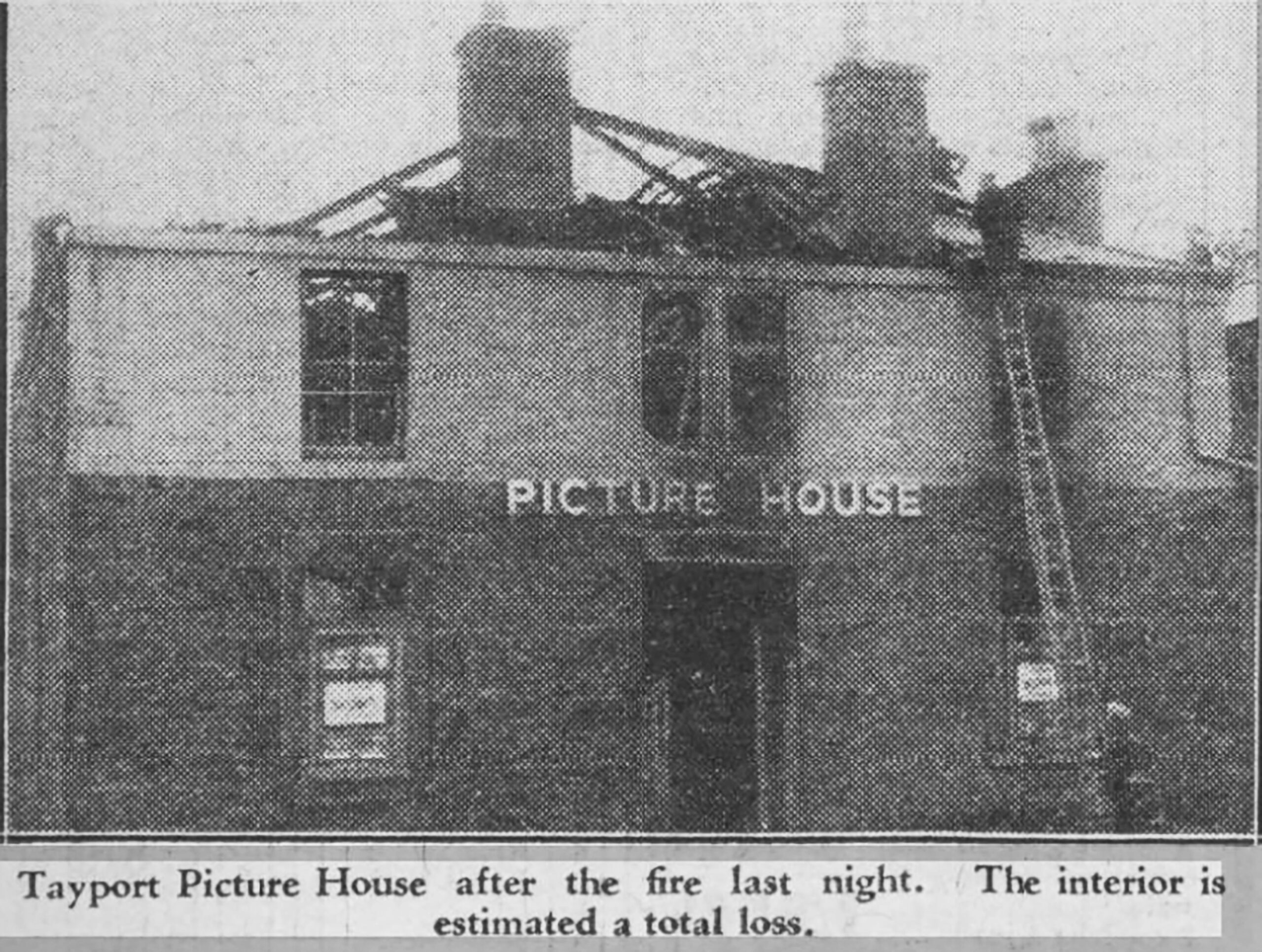 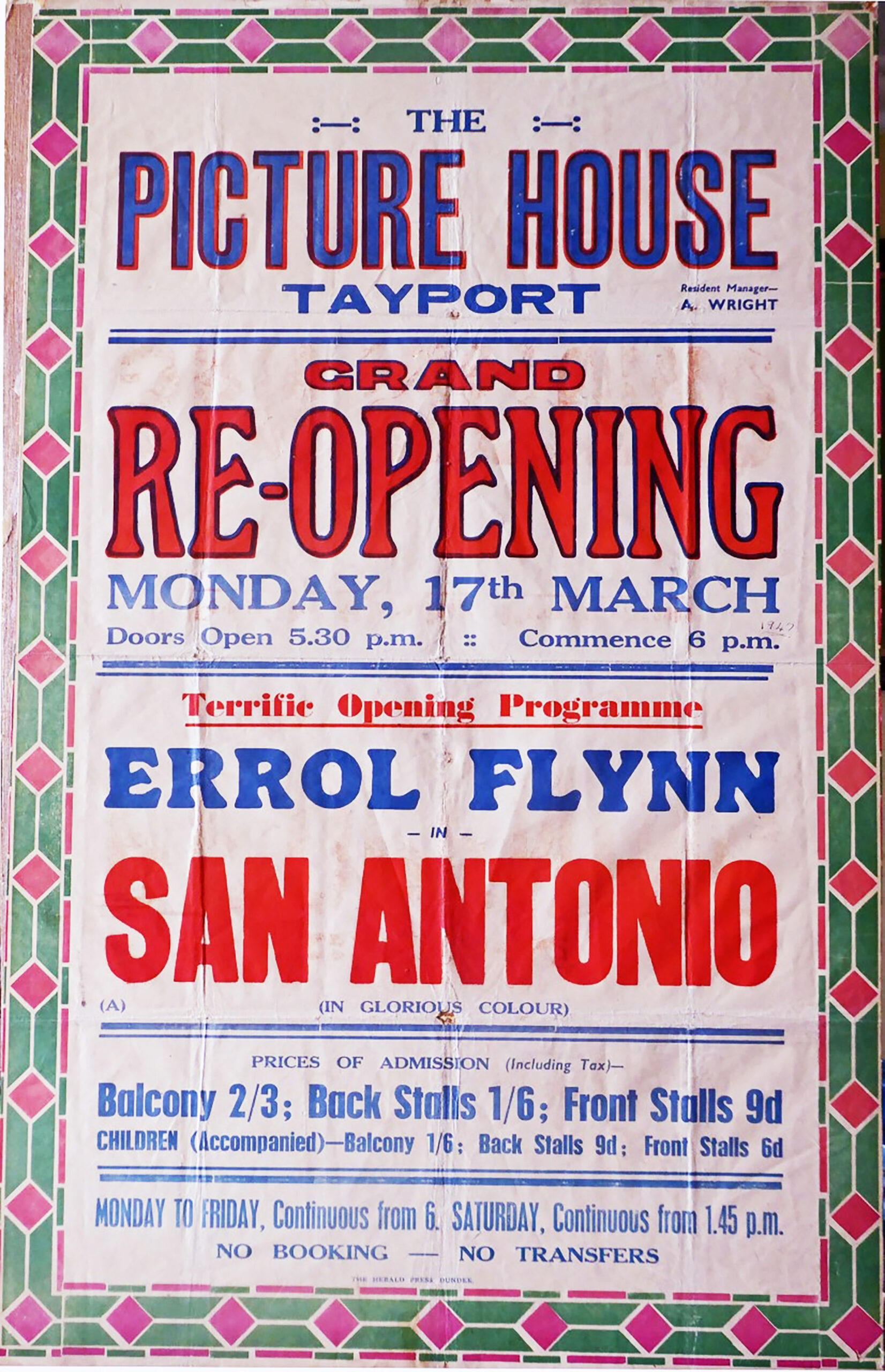 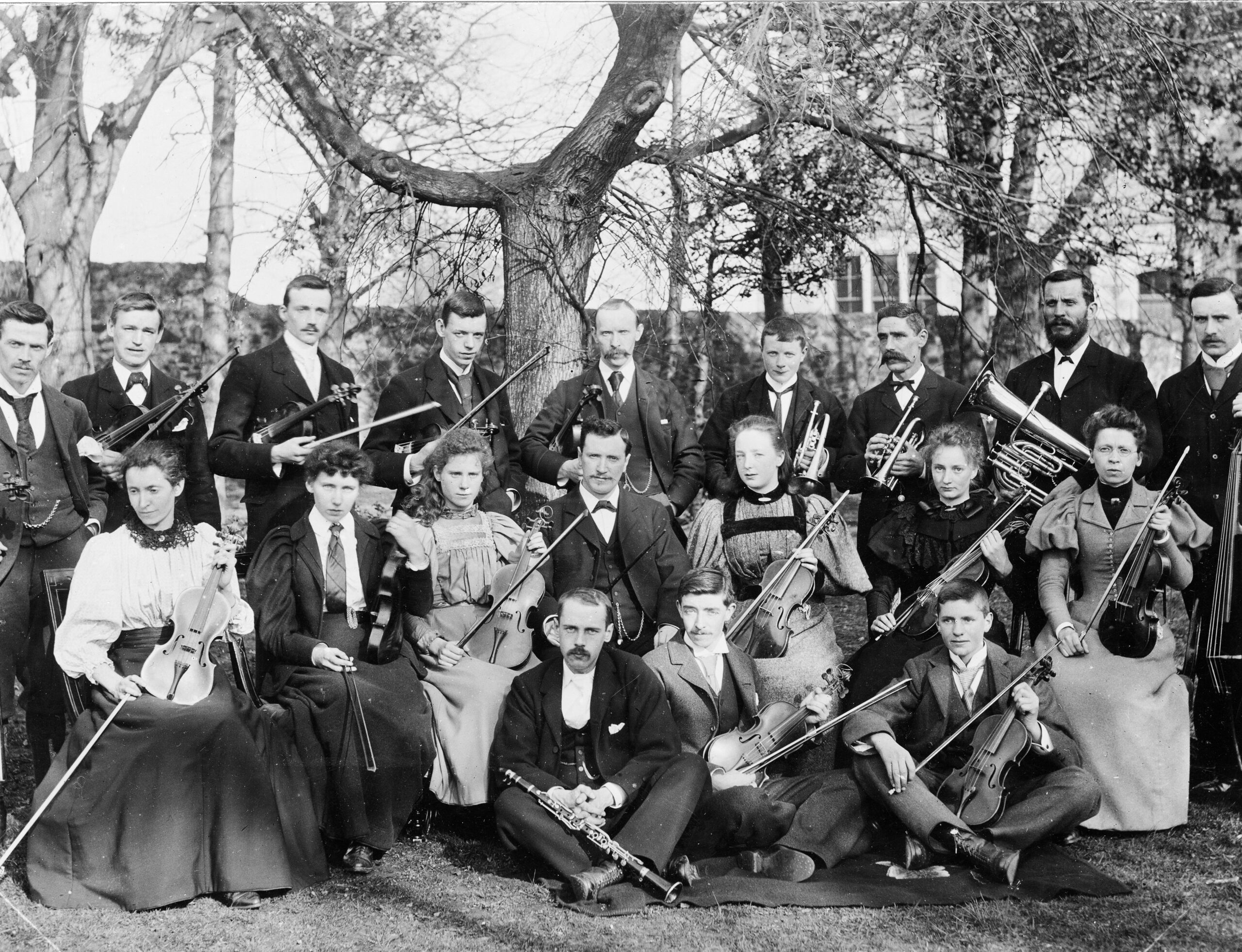 Groups and societies also played a significant role within the community providing entertainment as well as musical and drama performing opportunities, particularly during pre-TV era. These included:- Tayport Brass Band (1868), Tayport Instrumental Band (1884) Tayport Dramatic Society (1890), Tayport Choral Society (1906), Tayport Orchestral Society (1923).  “the Royal Garrison Artillery Volunteers band were  parading the streets  May 15, 1883, for the first time this season. They also played at the eighth annual Horticultural Society Show in the Temperance Hall in August 1883 under the leadership of W. Hogg.”

Tayport Amateur Dramatic and Musical Society  or TAMS (1949) is still active as TADAMS in both the Newport and Tayport communities. The Instrumental Band is now based in what was the former Parish Church Hall in Maitland Street. Previously under the baton of the late Bob Ness, the band played the National Anthem for the Royal Visit of Queen Elizabeth, The Queen Mother, on September 19th 1950. Many local organisations utilised the Temperance Hall which opened in 1877 and subsequently became the Town Hall before more recently, the Gregory Hall, which was the venue for the Community Council’s Burgh’s Centenary Concert in 1987. 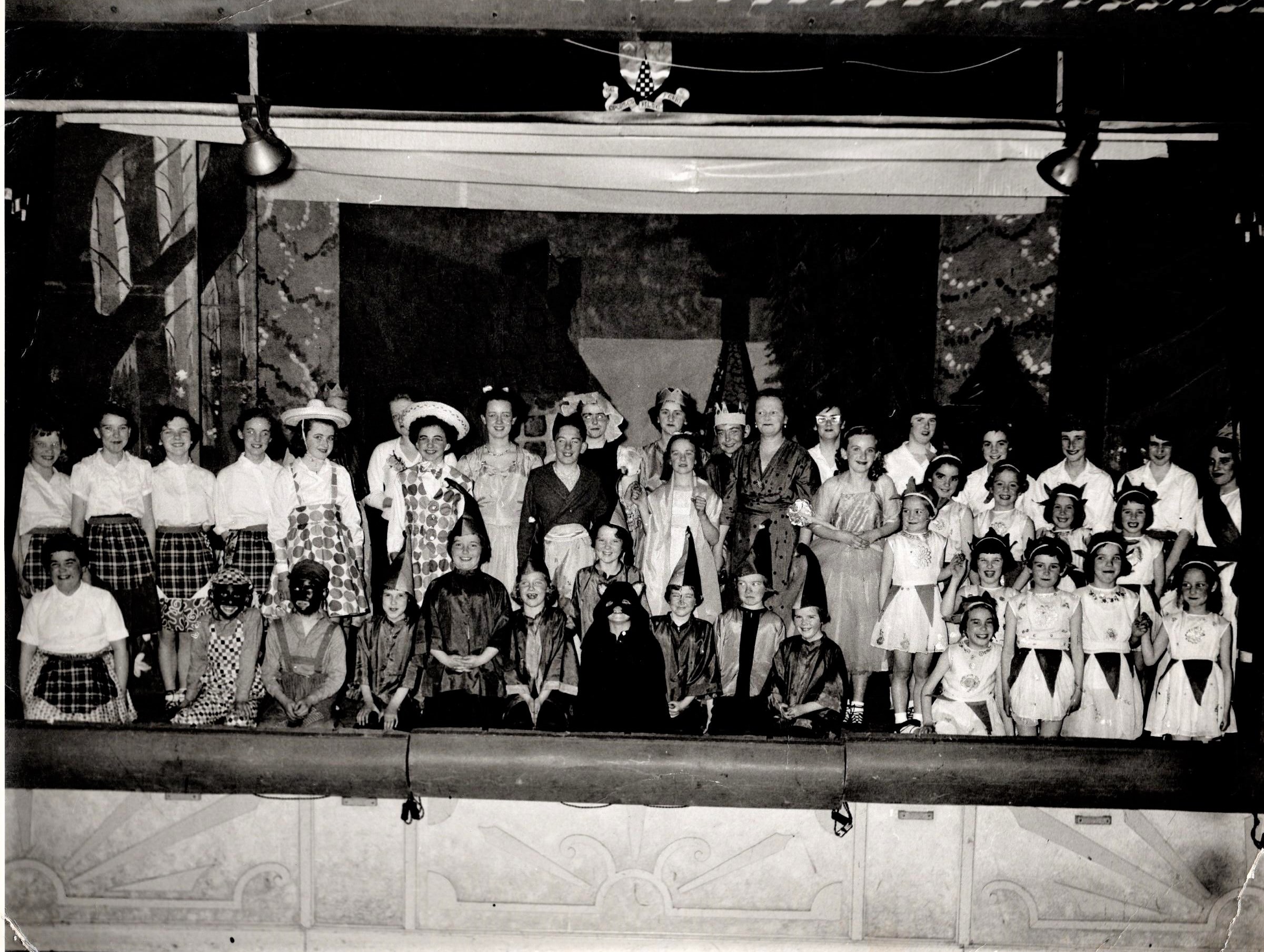 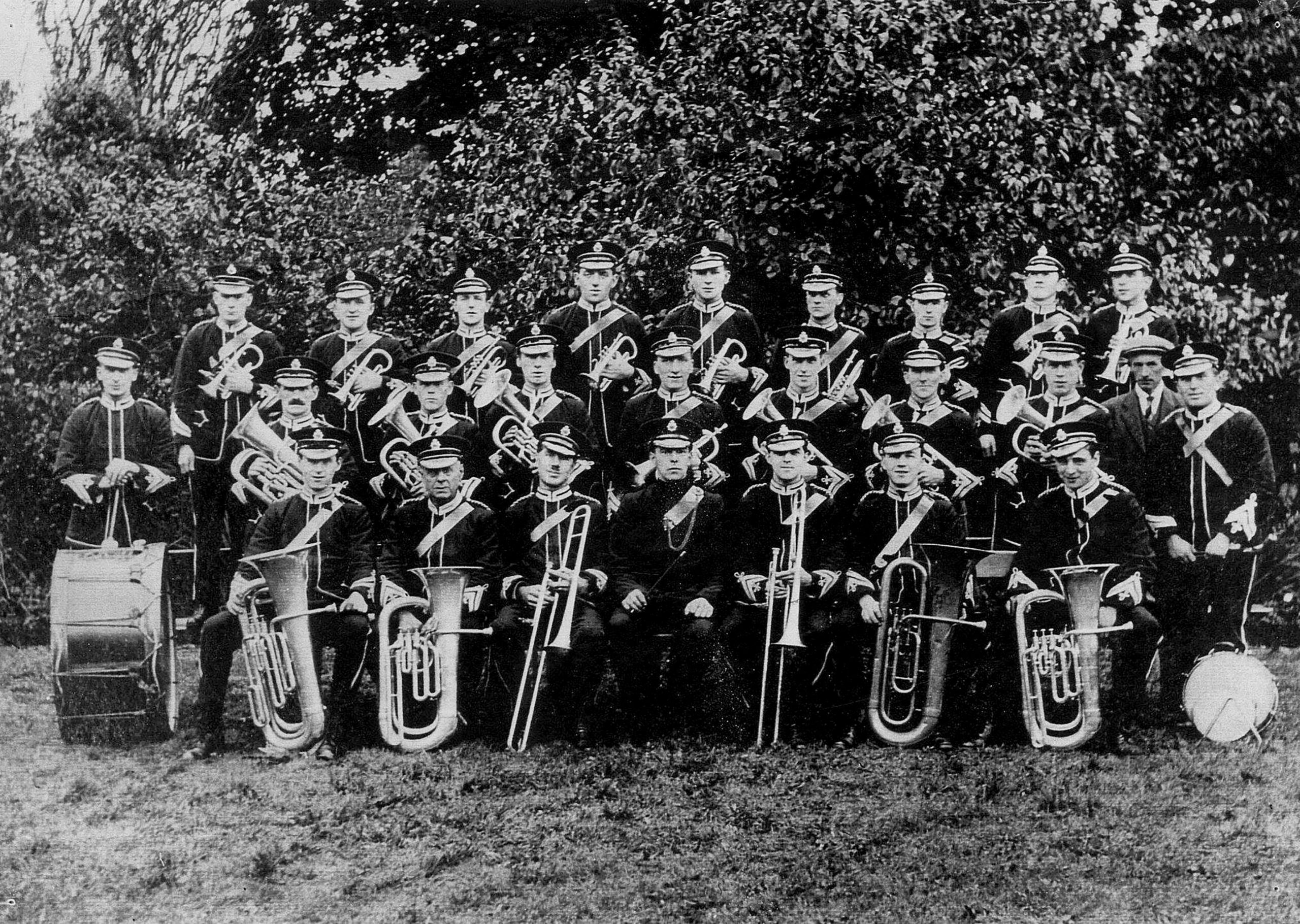 Throughout the years, youth organisations have provided development and socialising opportunities in various locations throughout the town e.g. In 1910 the Boys Brigade of both the Established and Free Churches met every Tuesday in the Volunteer Hall and had some 80 members. Similarly the Girl Guiding movement was equally active throughout much of the 20th century. In 2021, the 37th Fife (Ist Tayport) Scout Group was the only remaining uniformed organisation and now also caters for both boys and girls as the Tayport Beaver & Cub Scouts. Since it was constructed in 1931 they have been based in their premises in Elizabeth Street which is still also available for wider community use. 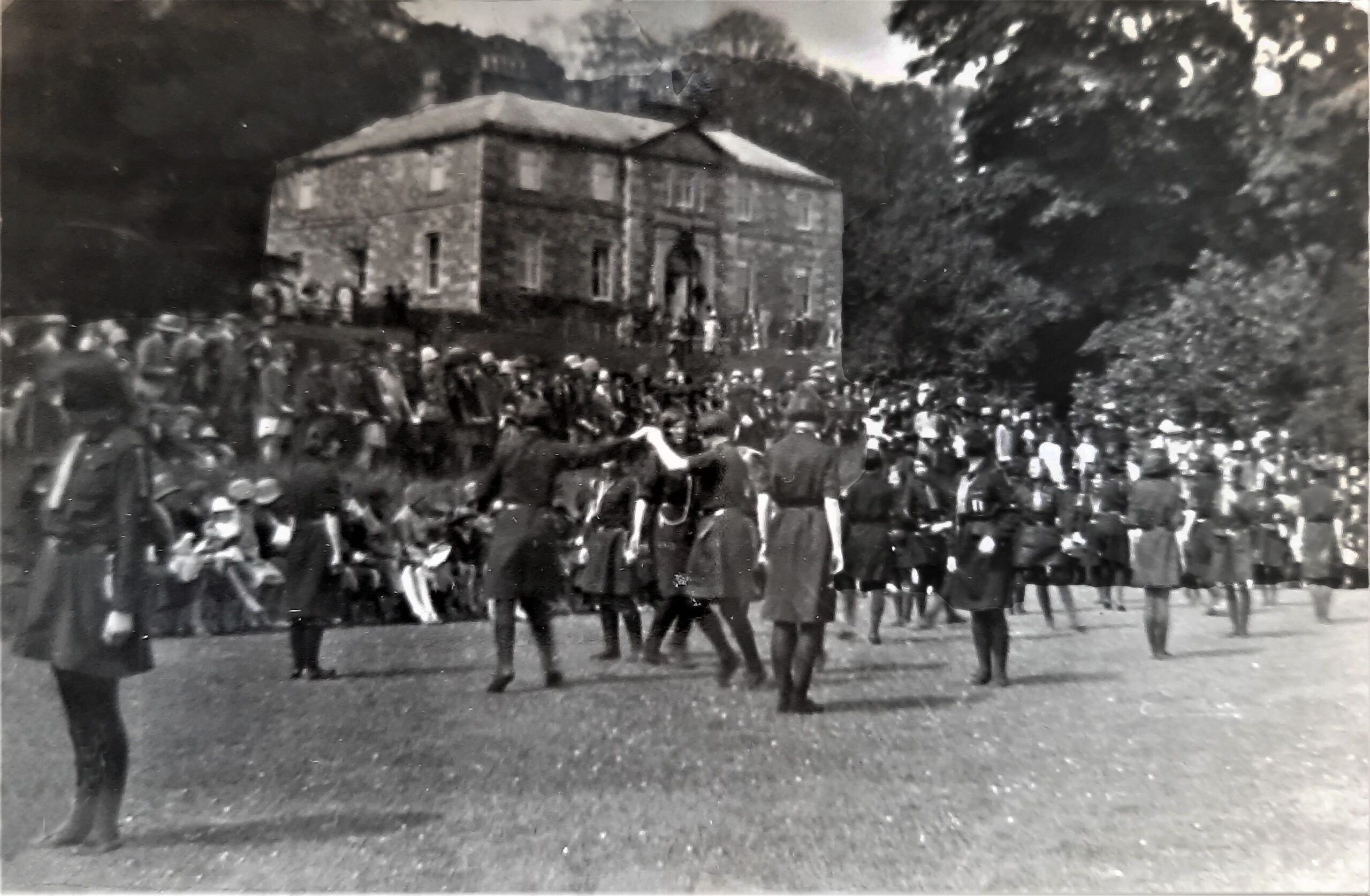 In 1885 there was a Tayport Literary Society  and over the years there have been numerous examples of verse at a local level which record various significant events within the burgh, reflecting both the community spirit and social environment of their times. These include :- A. Berry- Southferry ( c.1850), Jessie Robertson, Cannie Pairt – Various, G.M. Forrester –Burns Gathering (1914),- The Roarin’ Game (1926) & Burgh Jubilee (1937), Thomas Lorimer – Memories of the Common (1954), R Stevenson – Guidbye Tae Cannypairt and Jean Heggie – Ode to Lucky Scalp (1979), Tayport My Native Land (1987) & Early Memories (1989). Jean’s Ode to Lucky Scalp was both put to music and performed by Ian D. Mathers in the 1987 Centenary Concert to a piano accompaniment by the late Michael Marra. 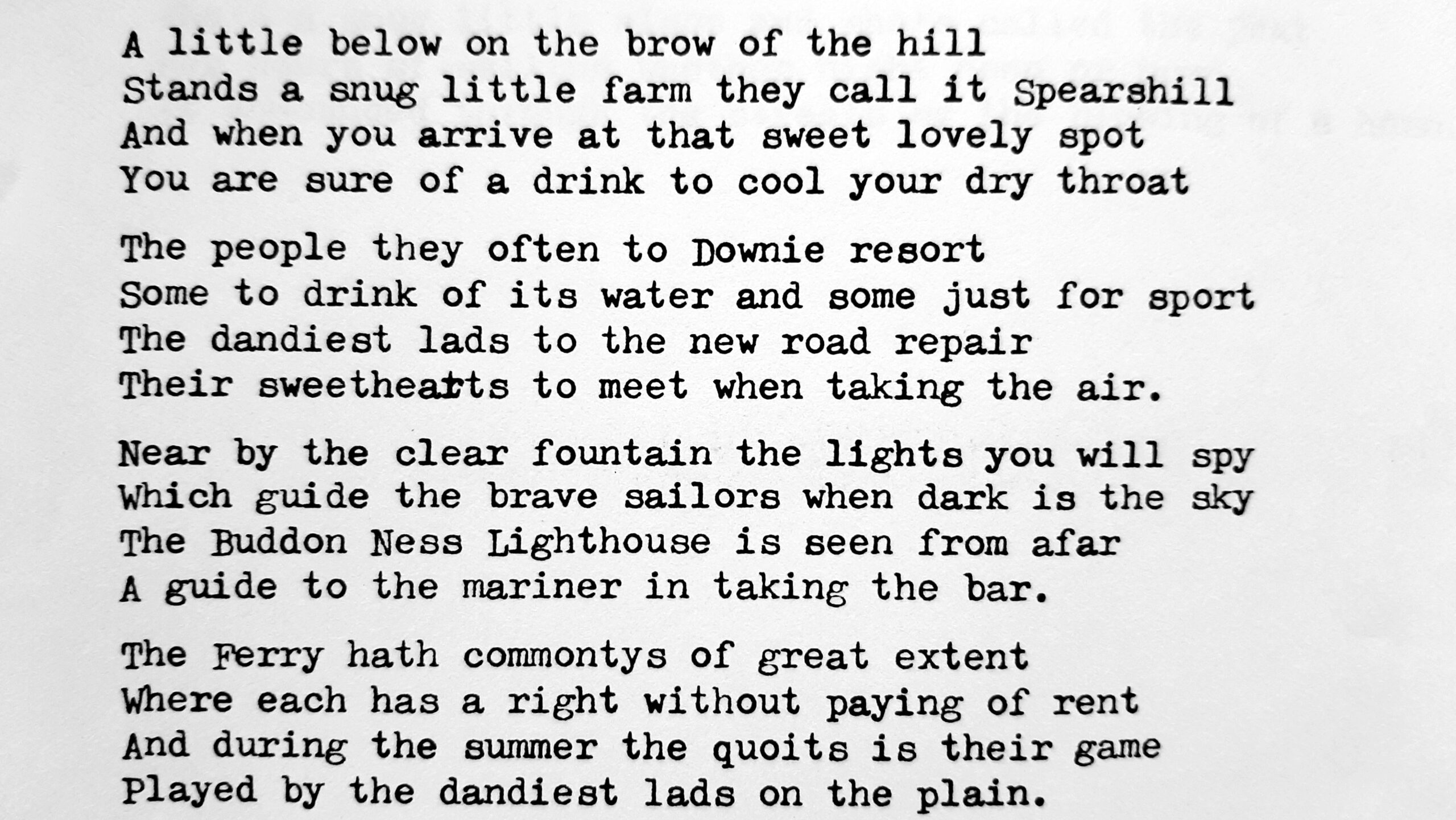 Extract from A. Berry Poem circa 1850 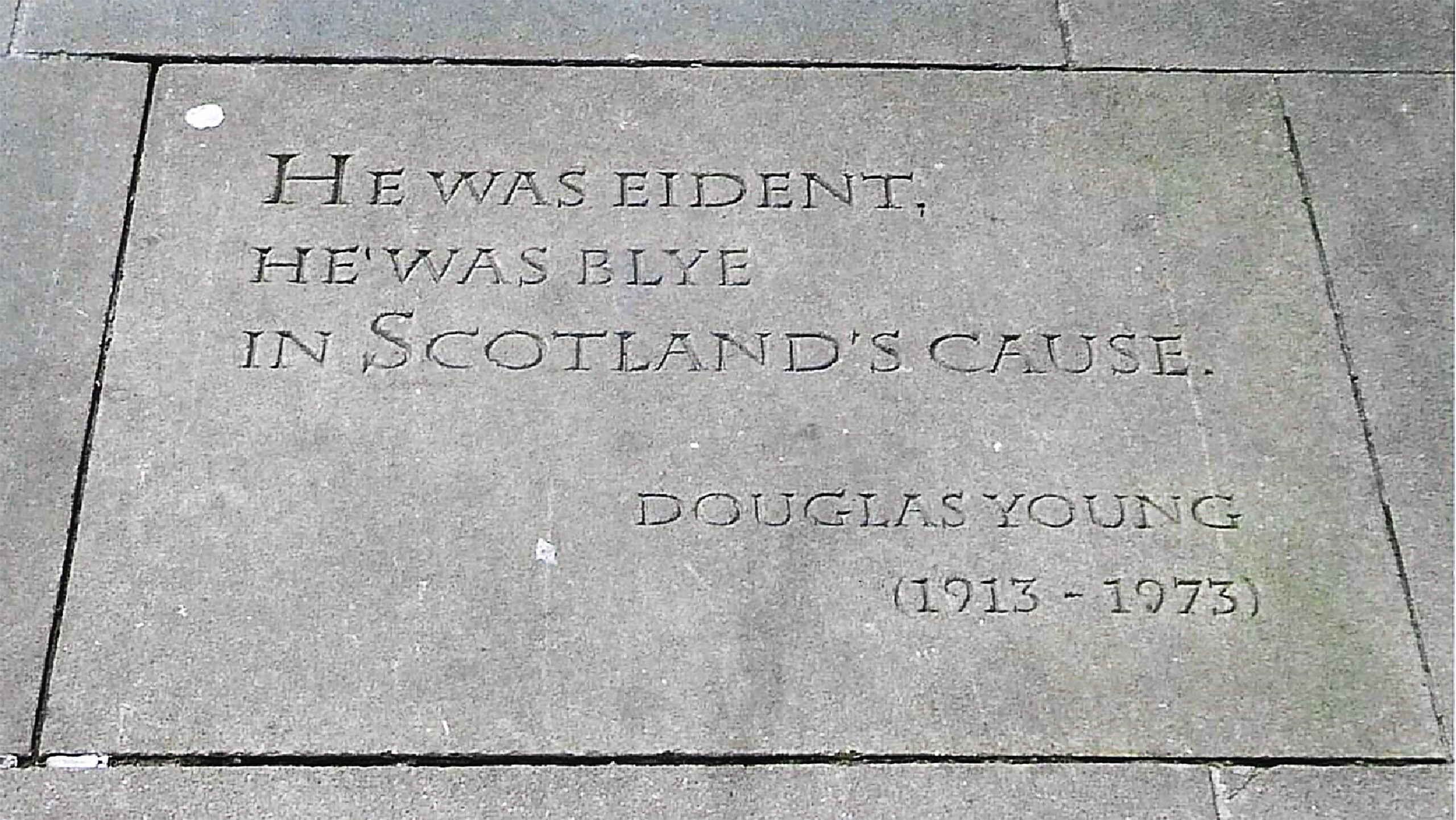 Memorial Slab for Douglas Young at Makar’s Court in 1973

Whilst staying with his uncle, Captain Keay in Rose Cottage, Dougall Street, during the time of the 1843 Church Disruption, Thomas Hood, the renowned poet and humorist, recalled attending a service by Rev. Nicholson of the newly formed Free Church, which was preached out of a school window in the manner of the Covenanters.

Two years later Rev. Nicholson moved to a congregation at the London Wall where he visited and gave comfort to Hood on his death bed. William McGonagall gave his Poetic interpretation of The Village Of Tayport And Its Surroundings in 1894. Further prominent, poets and academics include the internationally renowned Douglas Young (1913-1973) who was also chairman of the SNP from 1942-1945. Young, who had a prescient view of a Scottish Parliament, was a grandson of the town’s first provost appointed in 1887 and responsible for composing the town Latin motto, the appropriately punned “Te Oportet Alte Ferri” meaning “It behoves thee to bear thyself loftily “. Douglas Young was from a well travelled family and was a classics Professor at McMaster University, Canada and the University of North Carolina at the time of his death. “ Tayport is the pleasantest place to live in that I have found in Europe. From Athens in the South to Stockholm in the North, I have gone questing; and from Dublin in the West to Moscow in the East. But for a place to live in I have never yet found any equal to Tayport.” (Glasgow Herald 4 July 1953). An appropriately inscribed paving slab in Makars’ Court in Edinburgh, places him in the company of such literary giants as Robert Burns, Sir Walter Scott and Robert Louis Stevenson.